Does an Image Show Ocasio-Cortez Fake-Crying at a Migrant Camp?

A picture taken in 2018 captured Alexandria Ocasio-Cortez, before she was elected to the U.S. House, protesting a migrant-detention camp in Texas. 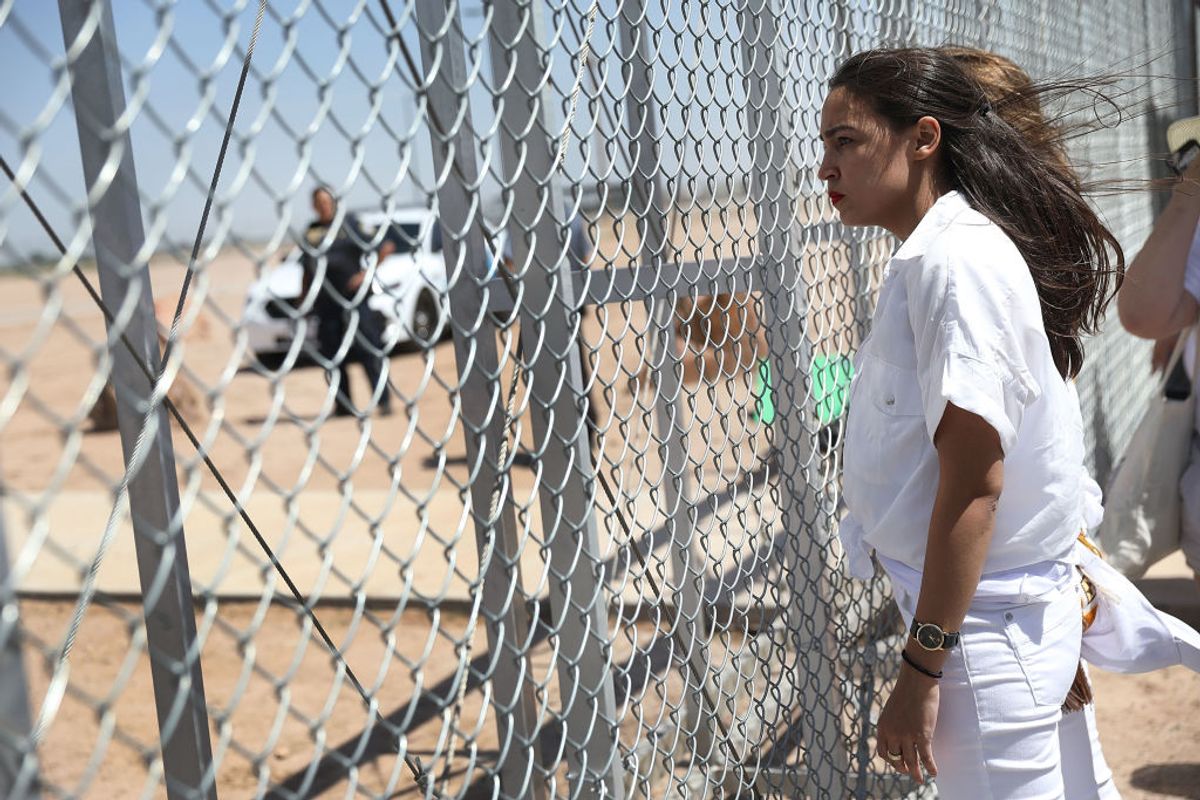 Claim:
A "newly uncovered" photograph reveals Alexandria Ocasio-Cortez was crying over an empty parking lot, not detained migrant children, at a protest in Texas.
Rating:

On the one-year anniversary of a large protest against the Trump administration's "zero tolerance" policy that separated migrant children from their parents, photojournalist Ivan Pierre Aguirre posted photographs he took during the June 24, 2018, event in Tornillo, Texas.

One picture captured then-U.S. House of Representatives candidate Alexandria Ocasio-Cortez having an emotional reaction while looking through a fence toward a detention facility housing children. Conspiracy trolls latched on to that image, claiming without evidence that the series of photographs from which is was taken were staged:

Given that the detention of immigrant children has become a major point of national controversy, and that the obsession with Ocasio-Cortez among right-leaning media outlets has been fairly constant since her surprise election to represent New York's 14th district in 2018, it's perhaps no surprise that dissecting the pictures for signs of alleged malfeasance became a new internet pastime.

"The pictures were ridiculed particularly as there was no sight of actual migrant children during the protest," Fox News reported.

That's no surprise, Aguirre told us. The roadway leading to the encampment was closed off to news media and protesters. "Obviously," he said, "there weren't kids two feet away."

Fox News also quoted a social media user voicing another critique, writing: “Excuse me while I take the time to put on bright red lipstick, a pristine white outfit and a Movado watch before I go see little kids locked up in the desert."

Aguirre said the group Ocasio-Cortez accompanied to Tornillo wore white as part of their protest. The rest of the criticism, he averred, seemed much ado about nothing. "You can’t wear lipstick and be at a protest?" Aguirre said. "Her watch — OK she has a new watch. People are just criticizing everything."

But the claim that got the most attention, pushed by viral conspiracy and junk news websites, made unfounded accusations that the photographs of Ocasio-Cortez were fake and that she was actually crying over an empty parking lot. Russian state media outlet RT and ZeroHedge were among junk news sites taking a cue from Alex Jones' InfoWars network in that regard. The latter posted an unfounded story on June 24, 2019, that posited the "empty parking lot" conspiracy theory.

"The photos show an emotional AOC holding her face and appearing to cry. Her attention appears to be directed towards whatever is on the other side of the fence," InfoWars reported. "However, a photo from a different angle shows there is nothing there aside from an empty parking lot and some police officers."

The conspiracy theory was a low-effort jab that required viewers not ask what lay just beyond the camera lens or seek out additional, readily available information about the event. Police weren't guarding an empty parking lot, and the photographs weren't newly uncovered.

The photographs touted by InfoWars were in fact those shot by Aguirre, who posted them on his Twitter account one year prior to InfoWars' "newly uncovering" them.

The so-called empty parking lot was in fact a roadway leading towards the Tornillo Border Patrol station, where thousands of migrant children were housed in a tent city.

"It wasn’t an empty parking lot; it’s an entrance and we [media and protesters] weren't allowed to go past that," Aguirre told us.

He sent us another photograph in which the roadway and the fence blocking access to the migrant camp could be seen: Ocasio-Cortez wasn't the first or last person to get emotional after reaching that fence. "She finally got to the fence and right beyond that road, way to the left, was the [migrant tent city] camp, and it represented something that made her emotional," Aguirre told us. "I've been out there, and some people get mad, some people cry, some people pray. No one questioned her [when the photographs were posted] last year."

Aguirre pointed out that during the 2018 protest he was on assignment for the Texas Tribune, and he -- like most Americans at the time -- didn't know who Ocasio-Cortez was.

"It was just a genuine, found moment," he said. "If we [the news media] weren't there she still would have broken down, I think. She could see the entrance to the camps out in the distance."

Aguirre, a freelancer whose work has also been published by the New York Times and Associated Press, told us the photographs of Ocasio-Cortez were just a few of many he captured at the protest that day, which some celebrities also attended, including singer Sia, model Amber Heard, and actresses Lena Dunham and Mira Sorvino.

Reporting that real but politically inconvenient events were actually staged is a long-standing practice at InfoWars. Jones was successfully sued for defamation by parents of children who were slain in the 2012 Sandy Hook elementary school massacre after Jones led his fans to believe the shooting was staged, and some of them relentlessly tormented those parents, believing them to be acting on behalf of a vague cabal seeking to undermine national sovereignty.

Paul Joseph Watson, the InfoWars Twitter personality who helped boost the bogus "empty parking lot" story, was also key in pushing unfounded claims in April 2019 that the fire at the Notre Dame cathedral in Paris was intentionally set by Muslims.

After our fact check was published, Watson authored a second, equally misleading story claiming Aguirre demanded Watson remove the photographs from his posts because it was revealed Ocasio-Cortez was "crying over nothing." In fact, Aguirre sent take-down notices to various publications and social media gadflies for copyright violations.

Updated to note a follow-up article was published by InfoWars.