Multiple mugshots were falsely claimed to show Antifa members who were arrested during a white nationalist rally in Charlottesville. 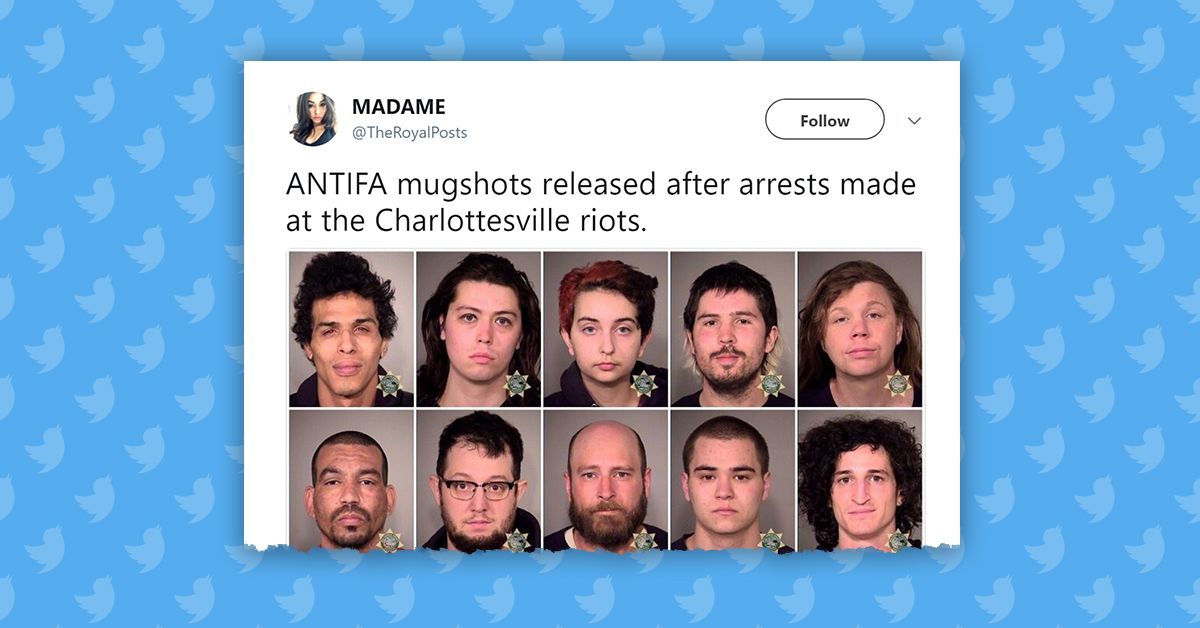 Claim:
A series of mugshots show all of the Antifa members who were arrested at a white nationalist rally in Charlottesville, Virginia.
Rating:

In August 2017, a set of mugshots was circulated on social media along with the claim that they showed members of the anti-fascist group "Antifa" who had been arrested while protesting a white nationalist rally in Charlottesville, Virginia: These mugshots were not related to the infamous white nationalist "Unite the Right" rally held in Charlottesville on 12 August 2017. Rather, these mugshots were taken after a labor rights protest in Portland, Oregon, over three months earlier:

What began as a peaceful march for labor rights on May Day in Portland turned violent as a group of self-described anarchists threw objects at officers and officers fired non-lethal weapons back. Police canceled the permitted march and deemed it a riot as tensions escalated.

Portland police arrested 25 protesters, on charges ranging from arson to assault, criminal mischief and theft. All 25 suspects were cited for failing to obey a peace officer, and police said the arrests will be reviewed for additional charges.

"In Portland we respect peaceful protest, but we do not and cannot support acts of violence and vandalism," Portland Mayor Ted Wheeler said Tuesday morning. "That's not political speech. That's crime."

"Last night was another chapter in a story that has become all too familiar in Portland: Protests that begin peacefully but devolve quickly due to the actions of those whose only desire is to damage people and property," he said. It's unclear if any of pictured individuals were specifically connected to an Antifa group, although the Washington Post noted that the May Day march in Portland did involve a large number of antifascists:

But in Portland, where the May Day march included a large contingent of black bloc anarchists and “antifascists,” there was significant damage left in its wake. As the march turned by the federal courthouse in the early evening, rocks collided with the windows. Soon a smoke bomb went off, then Pepsi cans flew over the crowd at police.

Not only does the graphic in question not depict Antifa members who were arrested for protesting the white nationalist rally in Charlottesville, Virginia, but it includes far too many people to be related to arrests stemming from the "Unite the Right" rally. According to an Associated Press report, only four men were arrested in connection with violence that broke out at the Charlottesville rally: James Alex Fields, Jr. was arrested and charged with second-degree murder after he after he drove his car into a crowd of protesters and killed a woman, and three other men were also arrested for various crimes:

Virginia Governor Terry McAuliffe also called for the arrest of those who were seen on a video severely beating a black man named Deandre Harris during the rally. Chris Cantwell, a white nationalist who was interviewed by Vice before the rally, may also face charges related to his attendance at the event.