'Antifa' Flyers Call For the Murder of White Children?

Flyers calling for the murder of white children were not created or distributed by an anti-fascist group. 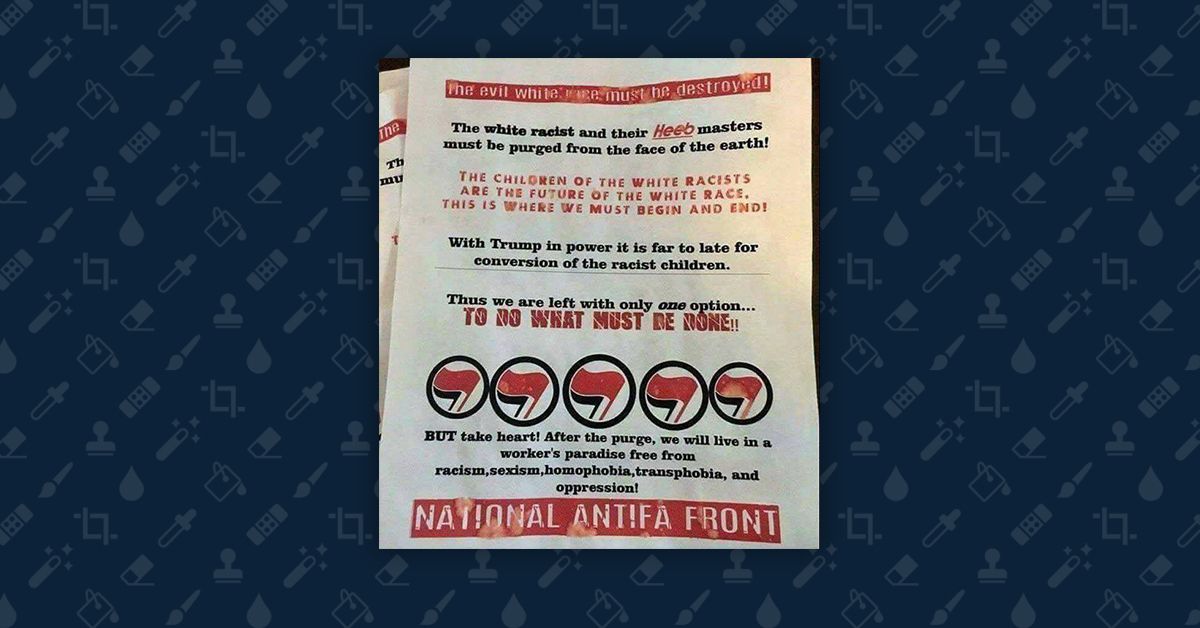 Claim:
The anti-fascist group Antifa created and distributed a flyer calling for the murder of white children.
Rating:

Following a white supremacist rally in August 2017 that left a woman dead when a neo-Nazi plowed his car into a group of counter-protestors, President Trump has blamed "both sides" for causing violence. Shortly afterwards, images of flyers calling for the murder of white children and purportedly distributed by "antifa," a loosely organized group of anti-fascist protestors, were recirculated as "evidence" to back up that claim: This flyer was not created by antifa, nor was it distributed by the group in Charlottesville or anywhere else.

This image has been circulating since at least April 2017. The earliest iteration we could find appeared on the web site ResistfromDay1.org, where it was posted with several similar images, all of which carried a resistfromday1.org watermark (that was subsequently removed before being shared on social media): There are several reasons to be sure that these flyers are fake: the supposed antifa organization named on the flyers does not exist; the flyer does not use language espoused by antifa groups; and the images have been posted along with a wide variety of claims about antifa groups in various cities.

The New York City Antifa Twitter account said that the flyer was "fake as a three dollar bill":

We asked @NYCAntifa to elaborate and they explained in an email several reasons why these flyers were "obviously" fake. For one, they confirmed that there simply was no a group called the "National Antifa Front." They also noted that antifa widely condemns the antisemitic language used in the flyer:

1) there is no such group called the "national antifa front." there is only one national group in the US and it is the Torch Antifa Network. And I can only think of one antifa group that uses the term "front" - and none use the term "national," which in the context of our work has a far right connotation.

2) the flyer is antisemitic and antifa roundly and openly condemns antisemitism.

3) No one wants to kill white people. This is a perverted reading of the idea of the "abolition of the white race" which says that the CONCEPT of whiteness needs to be dispensed with - NOT literally harming anyone. no antifa ever says things like the "evil white race."

4) no antifa would ever use this language of the "to do what must be done," "after the purge," or "workers paradise." this is a cartoonish image of Stalinism. most antifa are anarchists [and] are opposed to all this.

Rose City Antifa also told us that the anti-Semitic language was a dead giveaway that these flyers were not created by an Antifa group:

Yes, we definitely agree with NYC Antifa that these flyers are fake. The use of "Heeb" alone is enough to prove that (anti-Semitic slur used by many white supremacists within the "Alt-right" and White Nationalist movements). Antifascist does NOT mean anti-white, and such a focus on race is a common misconception made by white supremacists when attempting to make fake antifa accounts or media. Similarly, "the purge" is also something that white nationalists advocate, not antifascists.

As far as the flyers' origin, we haven't come across these anywhere in the pacific Northwest.

The message on the flyer is also not one that has ever been espoused by antifa groups. In fact, when a similar rumor circulated about another flyer promoting "white genocide," the Emerald City antifa group in Seattle denounced the message and said that it read like an alt-right nightmare:

Another head’s up – we did not create or distribute this one either. This is not our message. This come across like what white supremacists tell each other about anti-fascists. Not very clever! Still, annoying.

Read the words of it. It’s exactly like their fantasy/nightmare of white genocide and anti-whiteness that the think anyone who hates racism believes in. We don’t have any actual evidence they did this, but this is the type of shit they do.

These images have also been posted with several different claims about their alleged origins. ResistFromDay1 claimed that the photographs showed flyers that were "plastered up and down 32nd St. in Brooklyn" (none of the images actually show the flyers posted along the street). The web sites Conservative Headlines and Source News, on the other hand, said that the flyers were "accidentally left behind" in a garbage can:

An ANTIFA anti-Trump protester forgot to toss his garbage in the trash can. The garbage was a pamphlet revealing a terrifying slogan, “The evil white race must be destroyed!”

Jack Posbiec, an "alt-right" figure who espouses conspiracy theories, claimed that an antifa group had posted the flyers for Holocaust Memorial Day; Bikers for America, a group that says to want to "restore American exceptionalism" claimed in August 2017 that the flyers were found in Charlotesville, Virginia after the deadly rally. Each of these claims, despite their varying geographies, used the exact same images.

Several users on the pro-Trump subreddit r/The_Donald and the 4Chan forum /pol/, where these images first received attention in early April 2017, also expressed skepticism about the authenticity of the flyers:

You printed those just now, didn't you?

Y do i have the feeling that you printed those yourself and are actually red flagging?

I'm betting this is faked.

It's funny! This has got to be some serious dank trolling. It basically takes Pantifa's premise and expands it out to it's natural conclusion. It's jumping to the end game, where Pantifa has SO DEHUMANIZED people with opposing viewpoints that it has led them to the "final solution". I think it's brilliant.