Former Oklahoma resident David Leon Johnson died on Dec. 20, 2021, after a battle with COVID-19, according to his obituary. 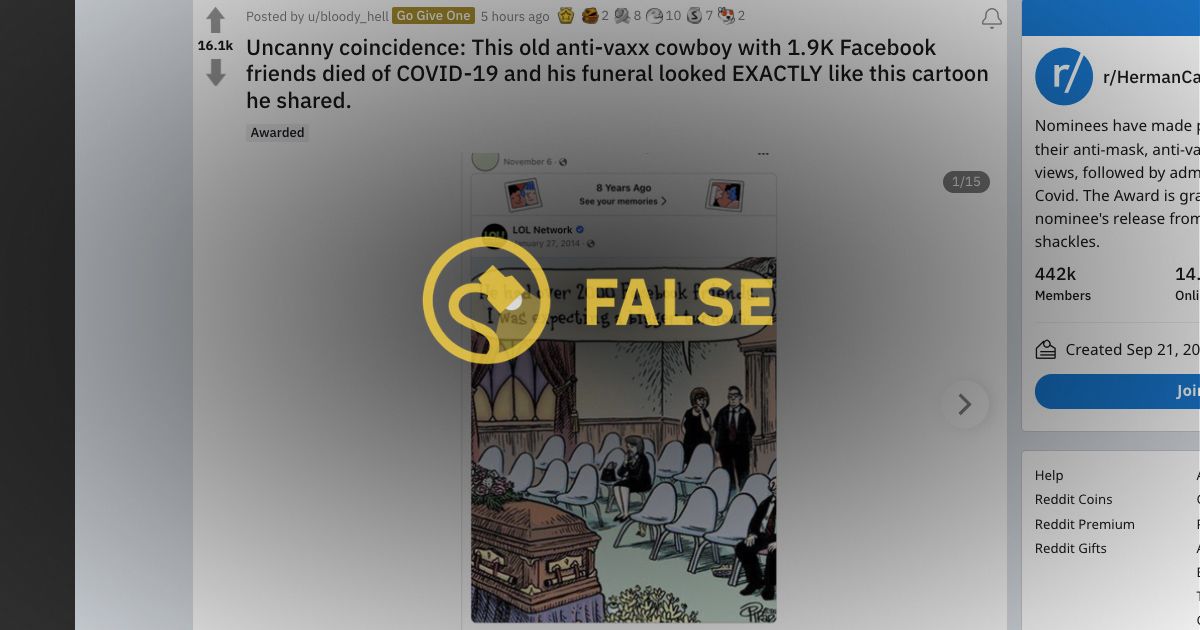 Claim:
The funeral of "anti-vaxx cowboy" David Leon Johnson looked exactly like a cartoon he shared on Facebook.
Rating:

On Dec. 20, 2021, former Oklahoman David Leon Johnson died after being infected with COVID-19, according to his obituary. He had previously shared anti-vaccine and anti-mask sentiments on Facebook. A Reddit post claimed that his funeral looked "EXACTLY" like a cartoon he had previously shared that showed mostly empty chairs and a casket. However, the picture from Johnson's funeral was from an hour before it started. A separate video posted by a family member showed a larger crowd at his burial, where he received military funeral honors and a flag-draped coffin for his service in the U.S. Navy.

On Dec. 27, 2021, a Reddit thread was posted about a former Oklahoma resident named David Leon Johnson. It read: "Uncanny coincidence: This old anti-vaxx cowboy with 1.9K Facebook friends died of COVID-19 and his funeral looked EXACTLY like this cartoon he shared."

Johnson died on Dec. 20, 2021, after battling COVID-19, according to his obituary. A Facebook post from a family member also said the illness "turned into pneumonia." His funeral was scheduled for 2 p.m. CST on Dec. 23 at Grace Baptist Church in Dill City, Oklahoma.

The post appeared on the r/HermanCainAward subreddit, which was created after Cain, a former GOP presidential candidate, died in July 2020 of COVID-19 in the weeks after attending a maskless rally that featured former U.S. President Donald Trump. It's unclear if he was infected at the event or at another time.

The "anti-vaxx cowboy" Reddit post showed 15 screenshots from Johnson's Facebook profile. For example, one of the images showed that Johnson shared a video from far-right commentator Candace Owens less than a week before being infected. Another showed Dr. Anthony Fauci with a mustache to make a comparison to Adolf Hitler. Fauci is President Joe Biden’s chief medical adviser.

All of the anti-mask and anti-vaccine screenshots did indeed come from Johnson's Facebook profile.

The crux of the Reddit post claimed that Johnson's funeral looked "EXACTLY" like a cartoon he had previously shared. In the old cartoon, it showed four people, empty chairs, and a casket. The caption read: "He had over 2,000 Facebook friends. I was expecting a bigger turnout." As of Dec. 27, Johnson had close to 2,000 Facebook friends.

It's true that a 10-second Facebook Live video showed three people seated for Johnson's funeral. However, this was misleading.

In reality, this video was from 1:07 p.m. CST. This was around one hour before the funeral was scheduled to begin. We searched for other media from the day and found a second video from his burial. At the burial, a larger crowd was present for the ceremony with his flag-draped coffin. According to his obituary, he had served in the United States Navy from 1961 to 1967.

In his obituary, Johnson was described as "a die-hard cowboy" who "loved his ranch and raising American Quarter Horses."

David Leon Johnson, 77, life long Dill City, Oklahoma resident passed away after his battle with Covid on December 20, 2021 in Durant, Oklahoma. David was born to Oca and Charlene (Cook) Burton on December 8, 1944 in Thomas, Oklahoma. After the passing of his father Oca in 1955 he was adopted by Ira Mike Johnson. He joined the United States Navy in 1961 and proudly served until 1967. David was a die hard cowboy and loved his ranch and raising American Quarter Horses. He was a loving father, grandfather, great-grandfather, brother, uncle, and friend. He will be missed by all who knew and loved him.

After the funeral, the same family member who posted the video from his burial said that Johnson's home had been robbed around Christmas. We will update this story if further details come to light.