Was an 'Anti-Antifa' Shirt Worn at US Capitol Riot?

To be clear, the word antifa is short for anti-fascist. 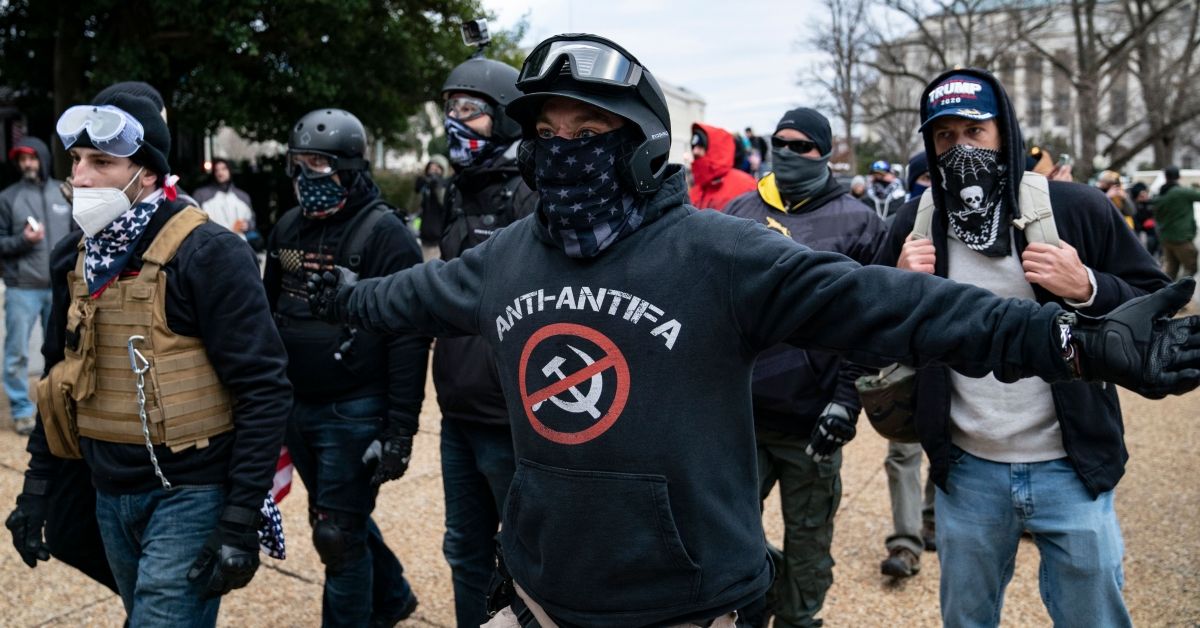 Claim:
A photograph shows a person wearing an "anti-antifa" shirt before the U.S. Capitol riot in Washington, D.C.
Rating:

A photograph supposedly showing a person in an "anti-antifa" shirt was widely circulated on social media in the days after a pro-Trump mob stormed the U.S. Capitol on Jan. 6, 2021: This is a genuine photograph of a person in an anti-antifa shirt in Washington, D.C., on the day that a pro-Trump mob attacked the Capitol.

The photograph prompted a lot of discussion on social media, as many people interpreted this person's shirt as a declaration that they were pro-fascism. Antifa, after all, is short for anti-fascism. Therefore a slogan of "anti-antifa" is akin to saying that you are against anti-fascism. Or, in other words, pro-fascism.

This photograph was taken on Jan. 6, 2021, outside the U.S. Capitol by Alex Edelman. The caption for this image, available via Getty Images, notes that these people claimed to be members of the Proud Boys, a far-right extremist group.

Protester who claim to be a members of the Proud Boys gather with other supporters of US President Donald Trump protest outside the US Capitol on January 6, 2021, in Washington, DC. - Demonstrators breeched security and entered the Capitol as Congress debated the a 2020 presidential election Electoral Vote Certification. (Photo by ALEX EDELMAN / AFP) (Photo by ALEX EDELMAN/AFP via Getty Images)