Was 'Anastasia' Removed from Disney+ To Protest Invasion of Ukraine?

The movie "Anastasia" is no longer available on Disney+, but its removal was unrelated to Russia's invasion of Ukraine. 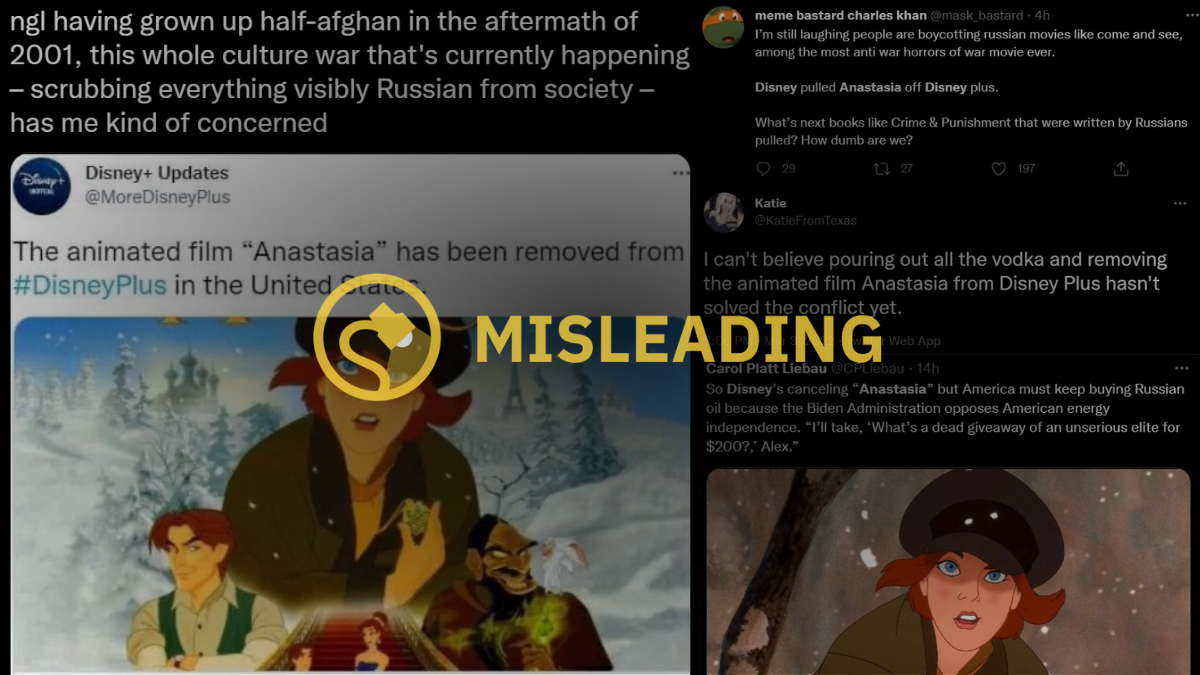 Claim:
The movie "Anastasia" was removed from Disney+ in protest of Russia's invasion of Ukraine.
Rating:

"Anastasia" was indeed removed from Disney+ in February 2022. However, the movie was removed for contractual reasons, not political ones, as the film was simply being moved to a different streaming service, the Starz movie channel.

In the days after Russia's invasion of Ukraine in February 2022, dozens of organizations announced that they were halting business with Russia in some form or another. The Eurovision Song Contest, for example, said that Russian singers would be banned from the 2022 competition. So when Disney+ users noticed that the movie "Anastasia," a 1997 release from Fox Animation Studios set in 1920s Russia, was no longer on the streaming service, many assumed that the movie had been removed as a form of protest: While "Anastasia" was truly removed from Disney's streaming service in February 2022, it was not due to Russia's attack on Ukraine. This movie was removed for contractual reasons, as it was to be made available instead on the Starz channel.

The website WhatsOnDisneyPlus.com was one of the first to report on Anastasia's absence from their service. Their report stated that "This removal from Disney+ has nothing to do with the current crisis involving Ukraine and Russia."

With the start of a brand new month, Disney is often forced to remove some content from Disney+ in the United States due to pre-existing contracts made before Disney+ was created.

Unfortunately, this month, the classic animated film from 20th Century Studios, “Anastasia”, has been removed from Disney+ in the United States. However, the film is still available on Disney+ in other countries. This removal from Disney+ has nothing to do with the current crisis involving Ukraine and Russia.

“Anastasia” will be available on Starz from March 18th.

Disney truly did announce some of its own "sanctions" against Russia in the days after the country's invasion of Ukraine. Disney said that it was pulling all of its theatrical releases in Russia, including the upcoming movie "Turning Red." The company said in a statement: "Given the unprovoked invasion of Ukraine and the tragic humanitarian crisis, we are pausing the release of theatrical films in Russia, including the upcoming 'Turning Red' from Pixar."

Disney did not mention "Anastasia" or any changes to their streaming service when making this announcement.

While "Anastasia" was not pulled from Disney+ in protest of Putin, this rumor wasn't out of the realm of possibility. EA Games, for example, announced that it was removing Russian teams from FIFA 22. You can read more about some of the non-government "sanctions" that have been placed on Russia here.

“‘Anastasia’ Removed from Disney+ Due To Contractual Reasons (US).” Disney Plus Informer, 1 Mar. 2022, https://www.disneyplusinformer.com/anastasia-removed-from-disney-us/.

“Anastasia” Removed From Disney+ (US) | What’s On Disney Plus. 1 Mar. 2022, https://whatsondisneyplus.com/anastasia-removed-from-disney-us/.