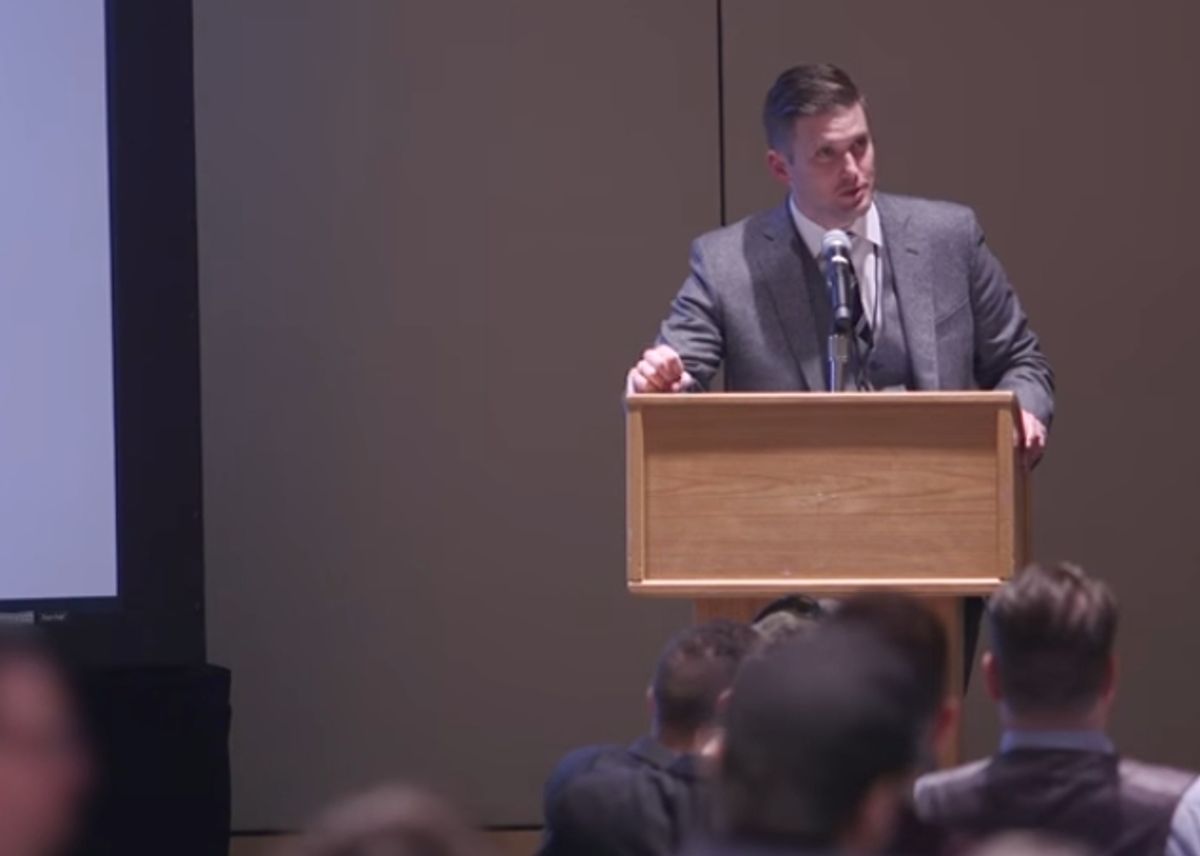 Claim:
Members of the alt-right group the National Policy Institute can be seen on video doing a Nazi-like salute as speaker Richard Spencer calls out "Hail Trump, hail our people, hail victory!"
Rating:

A white nationalist group called the National Policy Institute (NPI) held a conference in Washington, DC on 19 November 2016 billed as a "central gathering point for alt-right writers, activists, and supporters."

Among the featured speakers was the president of the organization, Richard Spencer (the man credited with coining the euphemism "alt-right"), who railed against what he called the "Lügenpresse" (German for "lying press," a term the Nazis used to defame critics), called Donald Trump's victory in the presidential election a "victory of will," and said the only option for white people is to "conquer or die."

On 21 November, The Atlantic posted a three-minute video of excerpts from Spencer's speech, including a moment when he saluted Donald Trump with the words, "Hail Trump, hail our people, hail victory," which were echoed by the attendees, some of whom raised their arms and shouted "Hail Trump!" in a Nazi-like fashion:

The New York Times reported that civil rights groups were quick to condemn the incident and urge President-elect Trump to disavow such groups and their white supremacist message:

Civil rights groups called on President-elect Donald Trump on Monday to publicly condemn extremist movements that are espousing racism in his name after hundreds of white nationalist sympathizers spent the weekend in Washington debating ways to preserve white culture.

Trump has been accused of fanning the flames of hate groups with his hard-line positions on immigration, his hesitance to denounce the former Klansman David Duke and his occasional promotion of white nationalist accounts on Twitter. While Trump has called for an end to hate crimes and said he wants to bring the country together, he has not been full throated on expressing disapproval of the alt-right, a rebranded white nationalist movement.

“We would like him to stand up and denounce these folks,” Heidi Beirich, who tracks hate groups for the Southern Poverty Law Center, said of Trump. “It’s inexplicable. The longer it goes on, the more you have to wonder if it’s not intentional.”

To have a group like this convening steps away from the White House proclaiming that what happened two weeks ago was a great victory for them and their ideas, there is value for the president-elect stating clearly that these are not American values, that their ideology is in conflict with American ideals.

Early on in the 2016 presidential race, Trump pleaded ignorance of the existence of the alt-right movement, saying "nobody even knows what it is." After the release of the video by The Atlantic, however, a Trump spokesperson issued a statement saying the President-elect unequivocally disavows the group:

“Mr. Trump has always denounced these groups and individuals associated with a message of hate,” Hicks said. “Mr. Trump will be a president for all Americans. However, he totally disavows the support of this group, which he does not want or need.”

Donald Trump himself affirmed that disavowal on 22 November 2016. For Richard Spencer's part, NBC News reported that the NPI president later claimed his Trump salute was intended as "ironic":

"There's an ironic exuberance to it all," Spencer claimed. "I think that's ... one of the things that makes the alt-right fun, is that we're willing to do things that are a bit cheeky."

Apart from trying to spin the incident as "fun" and "a bit cheeky", Spencer made no attempt to deny or disavow what was shown in the video.