Did Viral Video Show a Real Fight at Airport Check-in?

The footage was shared widely on social media in May 2022, prompting speculation about its authenticity. 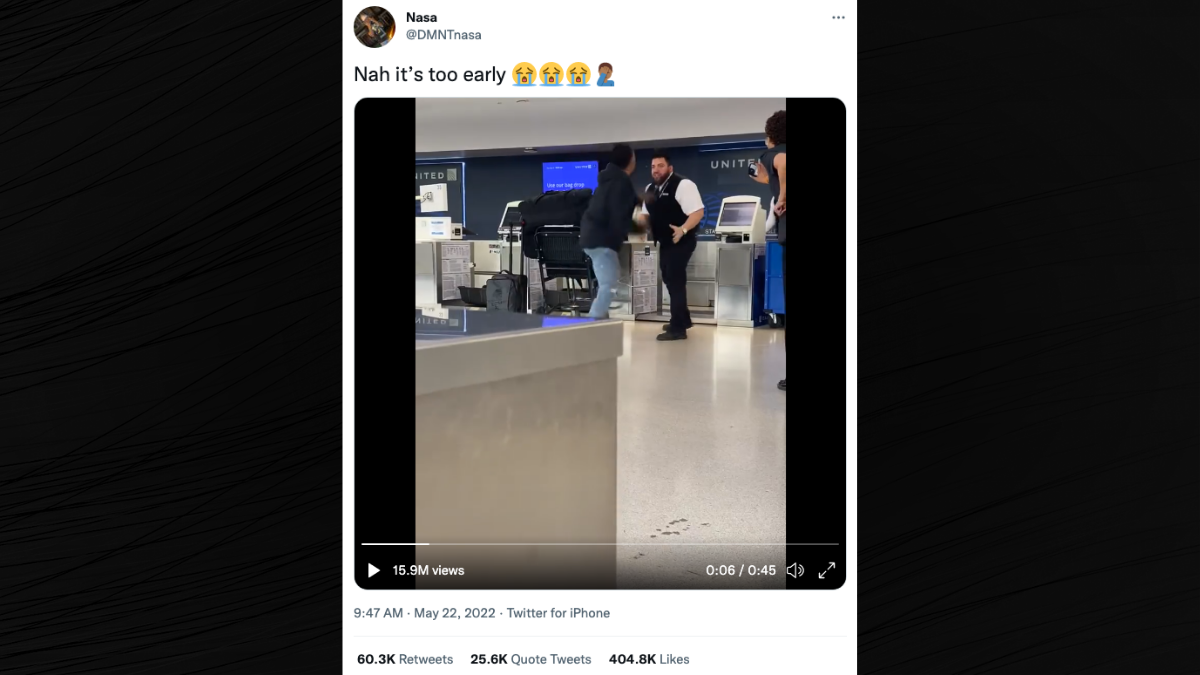 Claim:
A video shared widely in May 2022 shows an authentic fight involving a customer and an airport check-in worker.
Rating:

In May 2022, social media users responded with opprobrium and disbelief at a viral video clip that appeared to show an exchange of blows between a United Airlines check-in worker and a member of the public, at an unnamed airport.

A widely shared May 22 tweet, posted by @DMNTnasa, included a 45-second video in which a man apparently working at a United check-in desk squared up to, and then slapped, another man who appeared to be a member of the public. In response, the customer punched the worker twice, knocking him to the ground. The clip provided no immediate clues as to what led up to the altercation, how it was resolved, or where it took place.

A longer recording of the incident appeared to show the customer repeatedly striking the worker in the seconds before the shorter, more widely shared clip cut in, indicating that the worker's slap was not the unprovoked assault it appeared to be at first glance.

Among the speculation posted by internet users was a suggestion that the video might have been a hoax involving Sal Vulcano, one of the creators of the prank TV show "Impractical Jokers," because Vulcano bears a clear resemblance to the airline worker shown in the video.

In reality, the man shown in the viral "airport fight" video in May 2022 was indeed an airline worker, and the incident was a real fight that led to the arrest of the customer, and the firing of the worker. Our rating is "True."

The fight took place at Newark Liberty International Airport in New Jersey on the morning of May 19.

A spokesperson for United Airlines told Snopes the worker shown in the video was an employee of United Ground Express — a subsidiary of the airline that performs check-in, luggage handling, and various other customer services. The employee was fired in response to the fight, according to the spokesperson, who wrote:

United Airlines does not tolerate violence of any kind at our airports or on board our planes and we are working with local authorities in their investigation of this matter.

A Port Authority spokesperson told Snopes police had arrested the customer, Brendan Langley, before releasing him:

The Port Authority confirms that Brendan Langley was involved in a physical altercation with a United Airlines employee at Newark Liberty International Airport on May 19 at approximately 11:03am and charged with simple assault and released on his own recognizance.

The customer shown in the video and later arrested appears to be the same Brendan Langley who plays as a wide receiver for the Calgary Stampeders in the Canadian Football League, and previously played for the Denver Broncos in the National Football League between 2017 and 2019.

Neither the airline nor law enforcement provided any details about what prompted the fight.