A political cartoon was misreported online as being a real warning for African travelers regarding "continued instability" in the U.S. 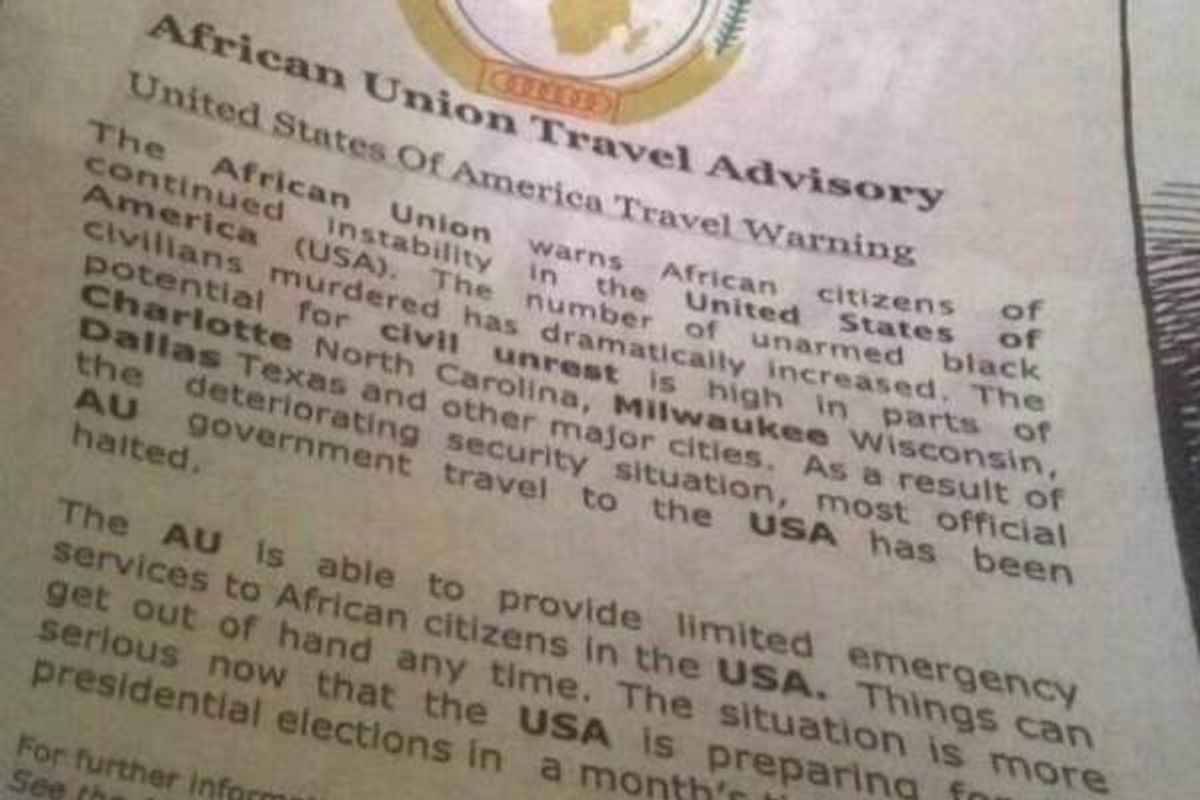 A recent satirical piece on racial unrest in the U.S. by a Kenyan political cartoonist was picked up by some African news outlets and reported as fact.

The cartoon by Godfrey Mwampembwa (a.k.a. Gado) published on 3 October 2016 and titled "African Union Travel Advisory" warned residents of that continent about "continued instability" in America. It also name-checked several U.S. cities that have seen fatal shootings of black men at the hands of police and resultant public protests:

The number of unarmed black civilians murdered has dramatically increased. The potential for civil unrest is high in parts of Charlotte North Carolina, Milwaukee Wisconsin, Dallas Texas and other major cities

Some online news outlets reported on the cartoon as if it were an actual statement from the African Union:

According to the caution notice dated 3rd October 2016, the rampant killings of unarmed black men posed a great danger for Africans visiting the US.

“The African Union warns the continent’s citizens of continued instability in the United States of America (USA). The number of unarmed black civilians murdered has dramatically increased. The potential for civil unrest is high in parts of Charlotte North Carolina, Milwaukee Wisconsin, Dallas Texas and other major cities,” the statement read in part.

The AU noted that due to the high-risk levels in the First World Country, official AU government tours to the US had been suspended.

Africans have been cautioned of a looming attack on black people in America as the political atmosphere heats up.

“Things can get out of hand anytime. The situation is more serious now that the USA is preparing for the presidential elections in a month’s time.” the travel advisory highlighted.

The satirical advisory was also disseminated in online forums and through the @FactsAboutAfrica Twitter account, which posted the cartoon at an angle that made it look like a newspaper advert:

The travel advisory of the African Union (AU) warning African citizens against the safety of traveling to the United States pic.twitter.com/wgy3Ktclah

Mwampembwa quickly addressed the issue and broke down the advisory's satirical nature:

It’s funny because many African countries go through those travel advisories — issued mostly by Europe and U.S. — all the time.

He also pointed out a link between U.S.-based activists and their counterparts across Africa:

I think most Africans relate to the Black Lives Matter movement, because they face police brutality all the time and have been fighting against it all along.

The cartoon packed an extra punch since it was released days after the fatal shooting of 38-year-old Alfred Olango, a Ugandan immigrant to the U.S., by police in El Cajon, California. The incident has already sparked several demonstrations both there and in nearby San Diego.