What Does Adidas Stand For?

Is Adidas an acronym about loving sports, or something naughtier? 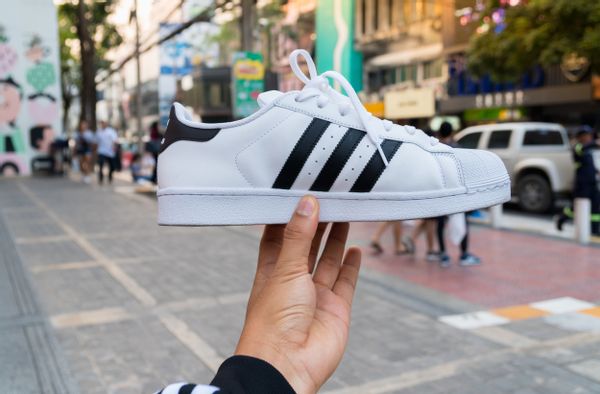 Claim:
The athletic shoe company Adidas gained its name from an acronym for 'All Day I Dream About Sex.'
Rating:

In the 1970s, 70% of the athletic shoe market in the U.S. was held by Adidas, a sneaker that afterwards almost entirely faded from the market and which only recently came back into vogue. Though a generation grew up almost entirely ignorant of this brand, in the 1970s only the terribly outré were shod in anything else — the lack of those three little stripes on one's shoes was considered nothing short of an admission of social ineptitude.

In its earlier heyday, rumors about Adidas ran rampant. Most popular was the grinningly-shared tidbit that the appellation stood for "All Day I Dream About Sex." Whispers had it the shoes' designers had deliberately chosen the funny-sounding name 'Adidas' to convey this teen-centric message in a way that would sail right over unsuspecting parents' heads. (Then, as now, sneaking a fast one by the 'rents was all part of the game.)

Such was the appeal of the spurious that few thought to question it. The truth, of course, wasn't anywhere nearly as exciting. The company was founded in 1924 in Germany and named for its owner, Adi Dassler.

Adidas isn't the only product to be so acronymized in product lore. Recently, Egyptians have been encouraged via chain letters circulated in high schools to eschew Pepsi because of the belief the product gained its name from "Pay Every Penny to the State of Israel" or "Pay Every Penny to Save Israel." That Israel didn't come into being until 1948 and Pepsi-Cola was first formulated and named in 1898 does little to dissuade those who have chosen to believe this explanation. Likewise, any number of otherwise rational folks are convinced gained its name from a shortening of "eight Jewish Korean [War] veterans," the supposed founders of that chain.

Why do folks look for hidden meanings in things? The answer is as simple as wanting to be the one seen as having the inside track, the one who's always in the know. We like secrets because we like to feel special, and the idea that we are party to information others don't have inflates our sense of privilege.

More simply, it's a "preening at the water cooler" kind of thing.