Is This a Real Chicago Tribune Column About Adam Toledo?

A Chicago Tribune op-ed generated outrage over its take on the killing of 13-year-old Adam Toledo. 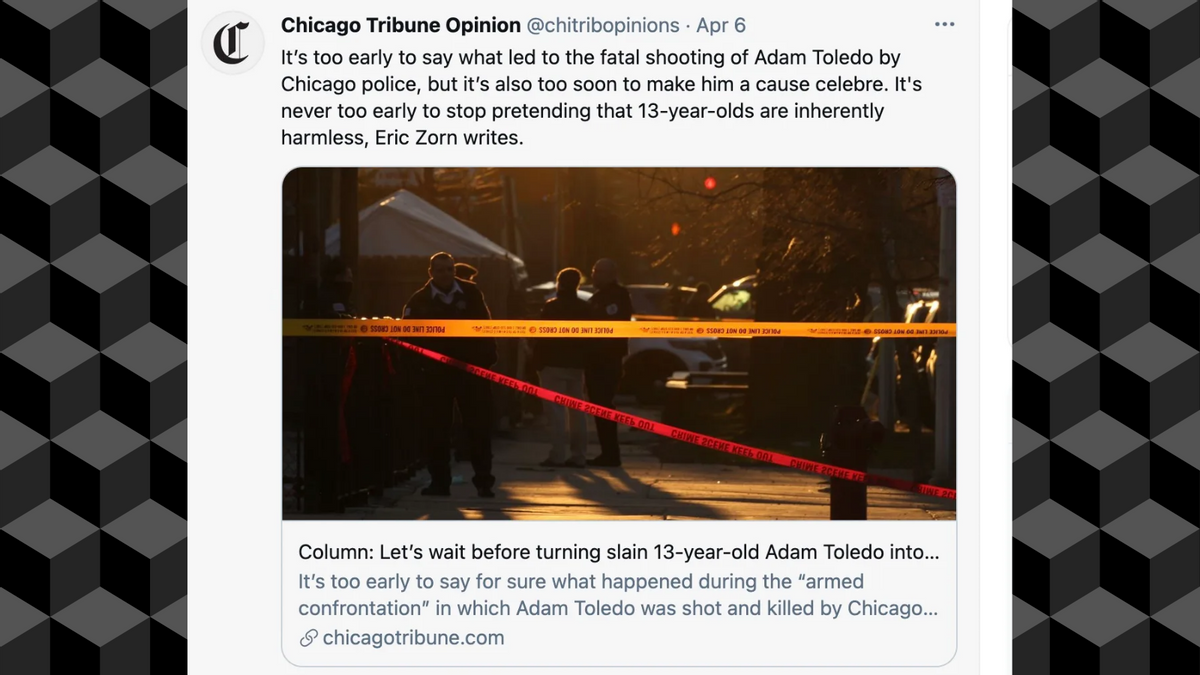 Claim:
A Chicago Tribune op-ed headlined, "Let’s wait before turning slain 13-year-old Adam Toledo into a martyr," argued that "it’s not too early to stop romanticizing and infantilizing 13-year-olds."
Rating:

On March 29, 2021, just after 2:30 a.m., police shot and killed Adam Toledo, a 13-year-old boy, in the Little Village neighborhood of Chicago. The shooting death of a child sparked outrage, galvanizing ongoing, nationwide protests over police killings of civilians, particularly people of color.

Police initially said that an officer fired a shot during an "armed confrontation" involving Toledo, but on April 15, 2021, prosecutors walked back initial statements that Toledo had a gun in his hand at the moment he was shot. No gun is visible in Toledo's hands in body cam footage released on that same date. His hands were up when he was shot.

An April 6, 2021, column for the Chicago Tribune added to the outrage. Penned by op-ed columnist Eric Zorn, the column was headlined, "Let’s wait before turning slain 13-year-old Adam Toledo into a martyr."

The column is real, as is the headline. Here is a screenshot of the Tribune's tweet linking to the column: The column argues that the public shouldn't rush to judgment as it waits for facts to come out about Toledo's killing, and opines, "it’s not too early to stop romanticizing and infantilizing 13-year-olds." An archived version of the column can be viewed here. It states, in part:

News reports quoted his mother saying the seventh grader was “a happy boy who liked to play with Hot Wheels and ride bikes with his siblings.” But news reports also noted that his mother had filed a missing person report about him March 26, withdrew it on March 27 when he returned home and later reported that he disappeared a second time before police shot him dead in the middle of the night.

And headlines from around the country in just the last six months remind us that 13-year-olds aren’t inherently angelic.

What do these news stories say about Adam Toledo? Nothing. They simply suggest that using his age as shorthand for innocence and harmlessness in this situation generates heat but sheds no light. He was not a “baby.” A 13-year-old pointing a gun, if that’s what he did, is as dangerous as a 23- or 33-year-old, maybe even more dangerous given what we know about the lack of judgment and impulse control in adolescents.