An ACLU executive in Georgia resigned after claiming her children were upset by the presence of transgender women in a bathroom, concurrently announcing the launch of a new "civil rights" group. 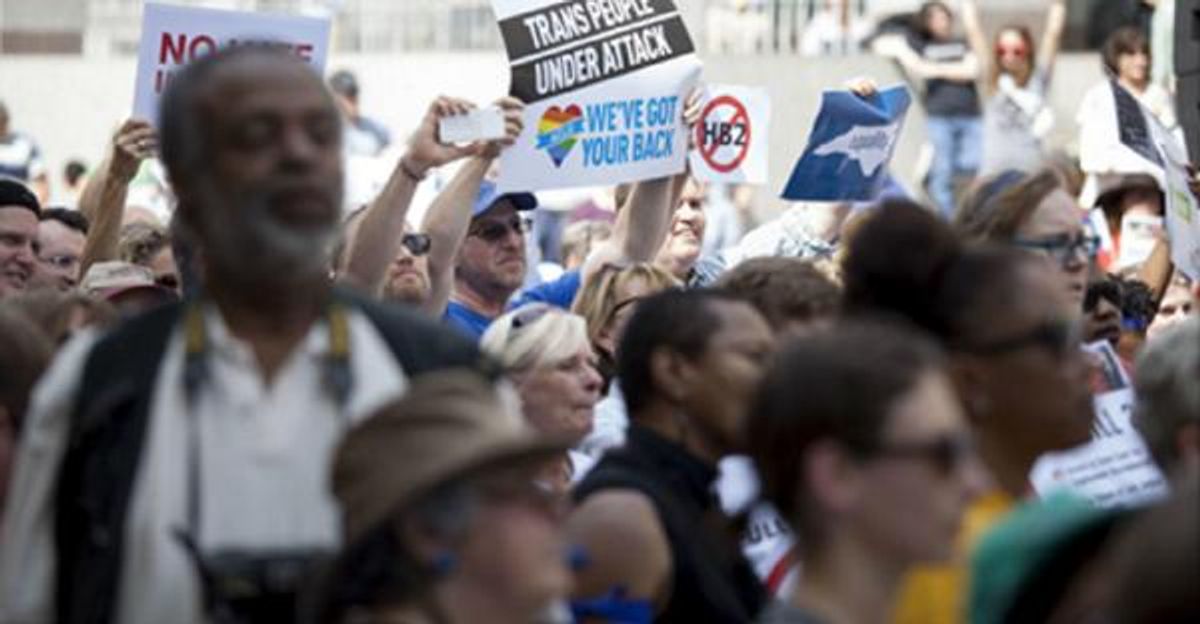 Claim:
An ACLU executive resigned because her children were made uncomfortable by the presence of transgender women in a bathroom.
Rating:

Former Georgia ACLU employee Maya Dillard Smith told an anti-transgender web site that she resigned from the organization after her children were made uncomfortable by sharing a bathroom with three transgender women.

Whether the reported encounter between Smith's children and three transgender women in a bathroom actually took place.

On 31 May 2016, the web site LifeSiteNews (a known purveyor of misleading information) published an article reporting that former Georgia American Civil Liberties Union (ACLU) employee Maya Dillard Smith had resigned from the organization because her children were made uncomfortable by sharing a bathroom with three transgender women.

This report first appeared on LifeSiteNews and was then aggregated by a number of similar blogs without additional question or verification. Citing a statement of unspecified date or distribution issued by Smith, LifeSiteNews reported:

The African-American woman who leads a state chapter of the ACLU has resigned, citing her own daughters' “frightened” reaction to biological males using the women's restroom.

The organization's increasing focus on legislating the transgender lobby's concerns pushed Maya Dillard Smith, interim director of the Georgia chapter of the American Civil Liberties Union, to tender her resignation.

In an excerpted statement, Smith shared an anecdote about her children's purported encounter with transgender individuals in a bathroom. It was unclear when, where, or under which circumstances Smith experienced the events she described; she merely stated that she personally encountered three "transgender young adults" who were "over six feet [tall]" and who had "deep voices" in a bathroom at some unspecified place and time:

“I have shared my personal experience of having taken my elementary school age daughters into a women’s restroom when shortly after three transgender young adults, over six feet [tall] with deep voices, entered,” she wrote.

“My children were visibly frightened, concerned about their safety and left asking lots of questions for which I, like many parents, was ill-prepared to answer,” she continued.

In a statement, she said that the ACLU has become “a special interest organization that promotes not all, but certain progressive rights ... [the] hierarchy of rights .. [is] based on who is funding the organization’s lobbying activities." She did not elaborate on the group's funding.

“I found myself principally and philosophically unaligned with the organization ... I understood it to be the ACLU’s goal to delicately balance competing rights to ensure that any infringements are narrowly tailored, that they do not create a hierarchy of rights, and that we are mindful of unintended consequences ... I believe there are solutions that can provide accommodations for transgender people and balance the need to ensure women and girls are safe from those who might have malicious intent,” she said.

Smith's purported encounter with transgender women of unusual height and her resignation from the ACLU coincided with her launch of a vague initiative called "Finding Middle Ground." A web site for that organization leads to a page featuring no information about the group's purpose or focus; aside from a contact form, the page includes only a video published by Maya Dillard Smith to YouTube on 22 May 2016:

We contacted the ACLU's national chapter regarding the Smith's claims, but the representative with whom we spoke was unable to discuss the controversy, saying only that it was a personnel matter. The organization hasn't yet directly addressed Smith's story, but both the ACLU's national and Georgia chapters shared the following link on their Facebook pages when it surfaced: