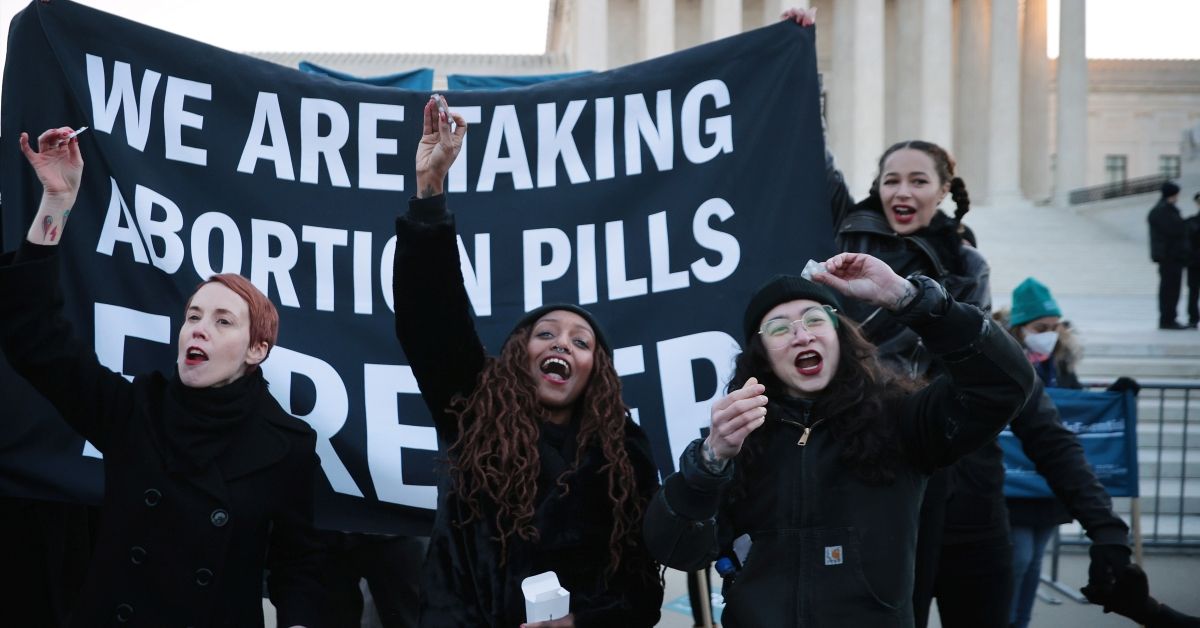 Claim:
On Dec. 1, 2021, a group of abortion rights activists swallowed abortion pills near the U.S. Supreme Court Building to protest a court challenge that could reverse Roe vs. Wade.
Rating:

Video evidence indeed showed four people who represent Shout Your Abortion, an advocacy group that works to increase Americans' access to abortions, supposedly swallowing pills with water outside the federal building on Dec. 1. While they claimed the oral medication would begin the process of ending early pregnancies, no evidence (aside from their word) existed to independently verify that that was actually the case.

On Dec. 1, 2021, the U.S. Supreme Court considered a legal challenge that could overrule the court’s historic 1973 Roe v. Wade decision legalizing abortion nationwide. Meanwhile, outside of the federal courthouse, activists for and against the procedure staged demonstrations, chanting and holding signs.

Among them were supporters of Shout Your Abortion, a national advocacy group that works to increase Americans' access to abortions and destigmitize the procedures. And video evidence surfaced supposedly showing four of them — including the group's co-founder, Amelia Bonow — swallowing "abortion pills" to apparently make the point that people can end early pregnancies anywhere, anytime, under existing constitutional guidelines.

A Fox News article highlighted the footage under the headline, "Protesters allegedly take abortion pills outside Supreme Court ahead of blockbuster case." The term "abortion pill" is the common name for using two different medicines to end a pregnancy: mifepristone and misoprostol, according to Planned Parenthood. It says on its website:

Then you take the second medicine, misoprostol, either right away or up to 48 hours later. This medicine causes cramping and bleeding to empty your uterus. It’s kind of like having a really heavy, crampy period, and the process is very similar to an early miscarriage. [...]

It was true that video footage that was captured outside of the federal building on Dec. 1 showed four people with the Shout Your Abortion movement supposedly swallowing pills that they said where "abortion pills."

Erin Matson, who's the director of an organization called Reproaction, tweeted a 40-second clip showing Bonow and three other people chanting in front of a banner reading, "WE ARE TAKING ABORTION PILLS FOREVER." The footage showed each of them putting a small item in their mouths and then chasing with water.

Another video, which was posted by the official Twitter account for Shout Your Abortion, recorded the activists opening hand-sized boxes supposedly containing the pills. The packages were white with black text reading, "ABORTION PILLS."

However, as of this writing, no documentation or additional proof existed to independently verify that they indeed ingested oral medication to end early pregnancies — or whether they had swallowed something other than "abortion pills" or nothing at all.

The four activists outside the Supreme Court took Mifepristone, the first medication used for an induced miscarriage or abortion. The pills were ordered and prescribed via AidAccess.org as part of their Advanced Provision service.

In sum, while it was true that four abortion rights protesters said they swallowed "abortion pills" outside of the federal courthouse on Dec. 1, and it was also factual that a genuine video depicted that protest action, we haven't so far obtained evidence beyond the activists' word to definitively prove that they ingested the purported medication. For that reason, we are issuing an "Unproven" rating on this claim.

The Abortion Pill | Get the Facts About Medication Abortion. https://www.plannedparenthood.org/learn/abortion/the-abortion-pill. Accessed 2 Dec. 2021.

This report's rating was updated from "Research In Progress" to "Unproven" after a representative with Shout Your Abortion responded to Snopes' inquiry about the demonstration.