Aaron Rodgers Photographed Holding 'Stand For the Flag, Kneel for the Cross' T-Shirt?

A photograph purportedly showing Green Bay Packers quarterback Aaron Rodgers holding a "Stand for the flag, kneel for the cross" shirt is fake. 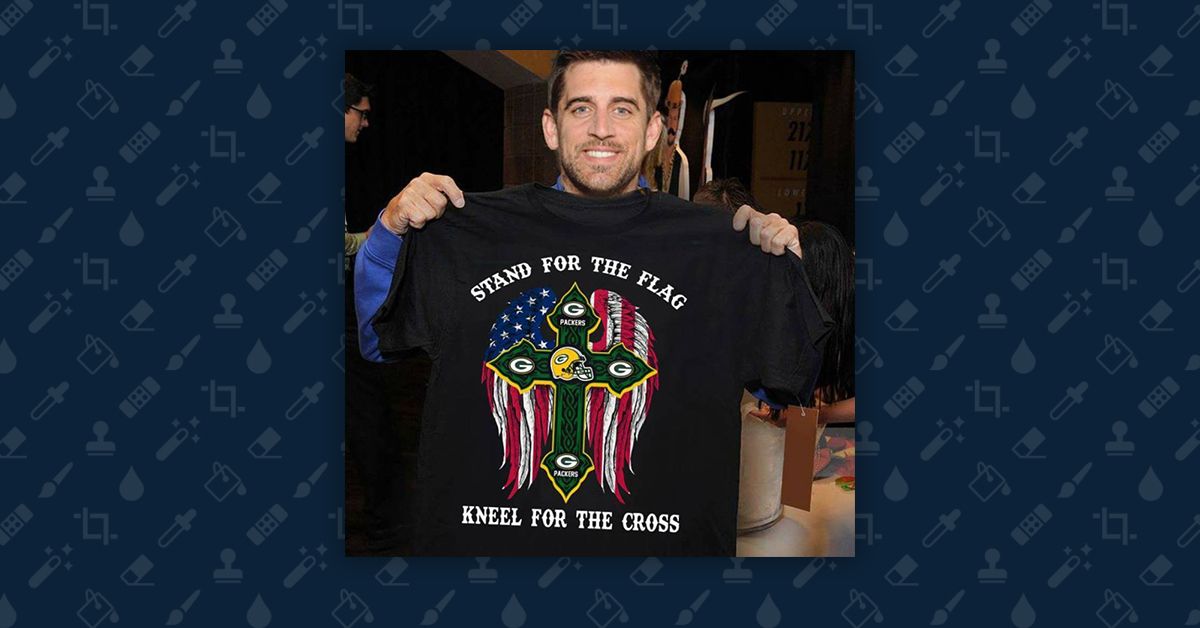 An image purportedly showing Green Bay Packers quarterback Aaron Rodgers holding a "Stand for the flag, kneel for the cross" shirt circulated online in September 2017 amidst the controversy over players kneeling during the national anthem in protest of inequality and police brutality: This is not a genuine photograph of Aaron Rodgers. Both the pictured person's face and the t-shirt design have been altered.

The original image was taken in the gift lounge at the MGM Grand Arena during the 48th Annual Academy of Country Music Awards on 7 April 2013 and showed musician George Strait holding a "Straight Shootin Country Boy" t-shirt. That photograph, available via Getty Images, was used as the basis to create several other promotional images of Straight holding up various t-shirts:

Surprisingly, this image has also been doctored to sell products unrelated to George Straight related. In addition to changing the t-shirt design, some vendors also placed another person's face on Straight's body in order to sell a variety of merchandise. We found versions of this image featuring musician Willie Nelson, actor Kit Harington, President Donald Trump, and New England Patriots Coach Bill Belichick: Doctoring an image to make it appear as if a celebrity is wearing (or endorsing) a clothing item is a common tactic amongst some t-shirt vendors. The doctored image of comedian Bill Murray and author Hunter S. Thompson wearing vulgar t-shirts, for instance, originated with a promotional campaign.

In this case, the doctored message on the shirt appears to counter the quarterback's actual beliefs about the "take a knee" protests. Before the Packers game on 24 September 2017, Rodgers linked arms with his teammates to show solidarity during the national anthem. He also posted a photograph of himself and other players kneeling along with the hashtag #unity: