Did the term '86' (to get rid of someone or something) enter the English language as part of a restaurant code? 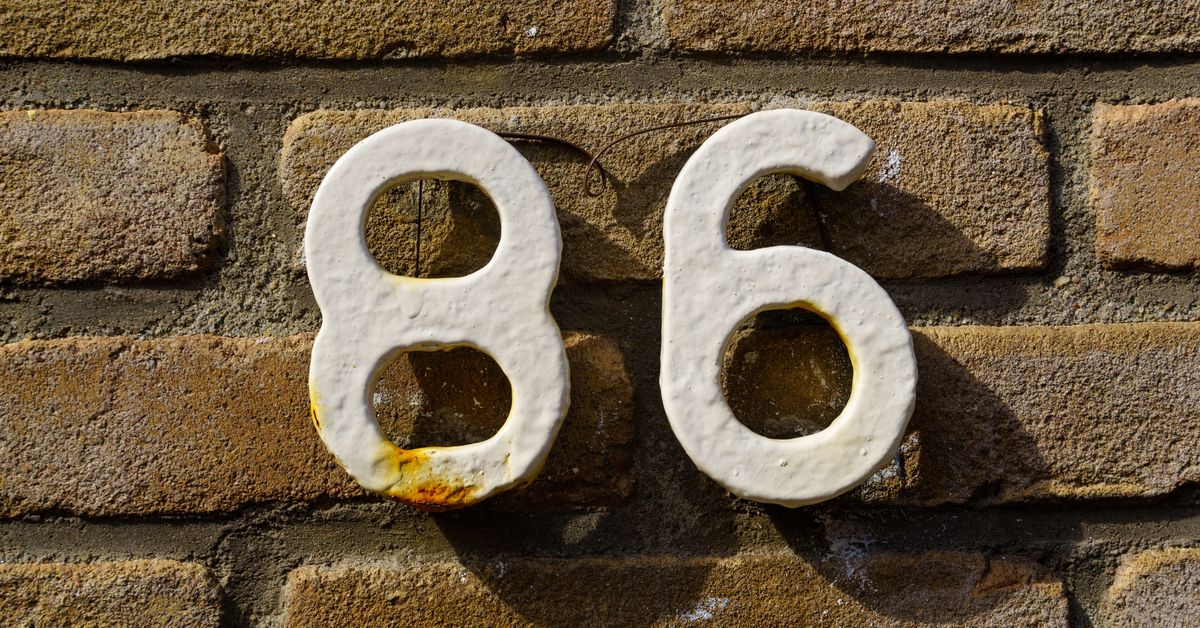 Claim:
The term 86 (to get rid of someone or something) entered the English language as part of a restaurant code.
Rating:

One of the many oddball terms that has crept into the English language in the past century is a peculiarly inexplicable one: the verbal shortform of '86' to mean 'to dismiss or quash,' 'to bar entry or further service to,' and even 'to kill.' While its uses have come to be widespread (one can say that the bank 86'd your scheme to have it underwrite the start-up costs of your business venture, or that a friend who made a spectacle of himself in a bar was 86'd from the place, or that a Mob boss had a particularly troublesome competitor 86'd), the origin of this now omnibus term remains obscure:

To 86 someone is to bar them off your property. The term is mostly used in bars throughout the U.S. There has been lots of speculation as to where the term originated but the most plausible is Article 86 of the New York liquor code which gives the reasons a person may be removed from a bar.

According to the Oxford English Dictionary, the first verifiable use of 86 in the 'refuse service to' sense dates to a 1944 book about John Barrymore, a movie star of the 1920s famous for his acting and infamous for his drinking: "There was a bar in the Belasco building ... but Barrymore was known in that cubby as an 'eighty-six'. An 'eighty-six', in the patois of western dispensers, means: 'Don't serve him.'"

The most widely accepted theory of the term's origin states it derives from a code supposedly used in some restaurants in the 1930s, wherein 86 was a shortform among restaurant workers for 'We're all out of it.' Snippets of said code were published in newsman Walter Winchell's column in 1933, where it was presented as part of a "glossary of soda-fountain lingo."

The meaning of 86 advanced by the restaurant code hypothesis presents it as an announcement that an eatery has run out of a particular item, whereas the usage people are familiar with positions 86 as a command that something or someone be gotten rid of. Could a term meant to communicate "We're out of strawberry ice cream, so tell people who try to order it that they'll have to choose something else" morph into "We no longer want that person on our property; show him the door" or "Dump that batch of vaccine; something's wrong with it"? More simply, how does "We don't have any" become "Get rid of what we have"?

The 86 of the restaurant code of the 1930s (which could have slipped into the papers as a leg-pull perpetrated on an unwary journalist) never seemed to be reflected in anything other than newspaper articles touting the code itself. Given that slang common to its times seems to effortlessly work its ways into all sorts of popular culture outlets (novels, radio shows, plays, movies), that 86 apparently took until 1944 to appear in as much as even one book tends to argue against its being in common parlance at the time the restaurant code was supposedly all the rage. Also, when it did appear, it had nothing to do with "We're all out of that item," the supposed original meaning, but instead was a presentation of "Deny that fellow service," one popular form of its clear-cut current meaning.

Another theory posits that Chumley's Bar (at 86 Bedford Street in New York) was the inspiration for the term. Unruly patrons thrown out of that establishment were said to land in the street from whence they would have a clear view of the 86 over the door, leading to their ruefully concluding they'd been 86ed. One problem with that supposition is why, if that were so, they didn't consider themselves 'Chumley'd'.

Other conjectures suggest that specific restaurants or watering holes were legally barred from hosting more than 85 patrons on their premises at any one time, thus the 86th person to attempt to gain entry would be denied service. Or that a particular legal code (such as one governing liquor laws) contained an Article 86 that had something to do with refusing service or otherwise saying no to someone. Those theories are shaky at best, in that no evidence in support of either has yet surfaced.

Far more outlandish explanations have also been offered. One posits that cowboys already well into their cups would be surreptitiously served 86 proof whiskey rather than a frontier bar's usual 100 proof in hopes of keeping them from getting too rowdy and kicking the bar apart. That etymology fails on a few points. First, term's meanings of refusing service or announcing the shortage of a particular item is far removed from the act being described, which is continuing to serve customers management has reason to view as problems. Second, a cowboy drunk on 86 proof whiskey would present just as much of a problem to a saloon's wellbeing as would one wasted on 100 proof hooch, thus there would be little benefit in terms of keeping the peace to substituting less potent booze for stronger firewater. Last, the term '86' has never carried the meaning of "To cheat a consumer by secretly substituting inferior goods for what has been bargained for."

Some think to attempt to tie the origin of the term to Article 86 of the Uniform Code of Military Justice, the AWOL (absent without leave) section of that code that makes it a crime for one serving in the military to fail to go to his appointed place of duty at the time prescribed, to leave his place of duty, or to be absent from his unit without authority. Were that the term's origin, one would expect its first surfacings to have occurred in the military. Also, you never hear of someone's having gone 86; you instead hear "He went AWOL."

Similarly, the American National Standards Institute's (ANSI) list of Standard Device Numbers gets looked to by some because its item # 86 is the lockout relay, a mechanism used to shut down an electrical system when things go haywire. While at least one of the core concepts of the linguistic term 86 (refusing service) is similar enough to the purpose of these devices (shutting something down), the list of Standard Device Numbers does not date to the 1930s.

Then there are those who look to the abortion drug RU-486 for the term's origin, translating the name as "Are you for 86 (murder)?" The compound was discovered in 1980, which rules it out as the origin of a linguistic term first noted in the 1930s, its "RU" coming from Roussel Uclaf, the French pharmaceutical company that developed the abortifacient.

Restaurant code and all other theories so far mentioned aside, one hypothesis as to the term's origin appears to hold water, at least in so far as no part of it seems to run counter to any other part. By its lights, 86 is rhyming slang for nix, a word meaning 'to forbid, refuse, veto' (as in "The boss nixed my great plan for reorganizing the company"). Nix carries a clear meaning of 'say no to, turn down, forbid,' which is the primary meaning ascribed to 86. Yet unlike other theories about how 86 entered the language, neither are there supposed earlier forms conveying a different meaning (e.g., the restaurant code), alternative forms the terms could more reasonably have taken (Chumley'd), nor documentary evidence supporting the posit's claim (liquor codes that included an Article 86 having something to do with barring service to a potential customer). Nix therefore appears the more likely of all the conjectures.