Were 48 Pictures of the Sun Used To Make This Image?

The figure-eight path of the sun in a viral image is real, but there are a few aspects of the photograph worth clarifying. 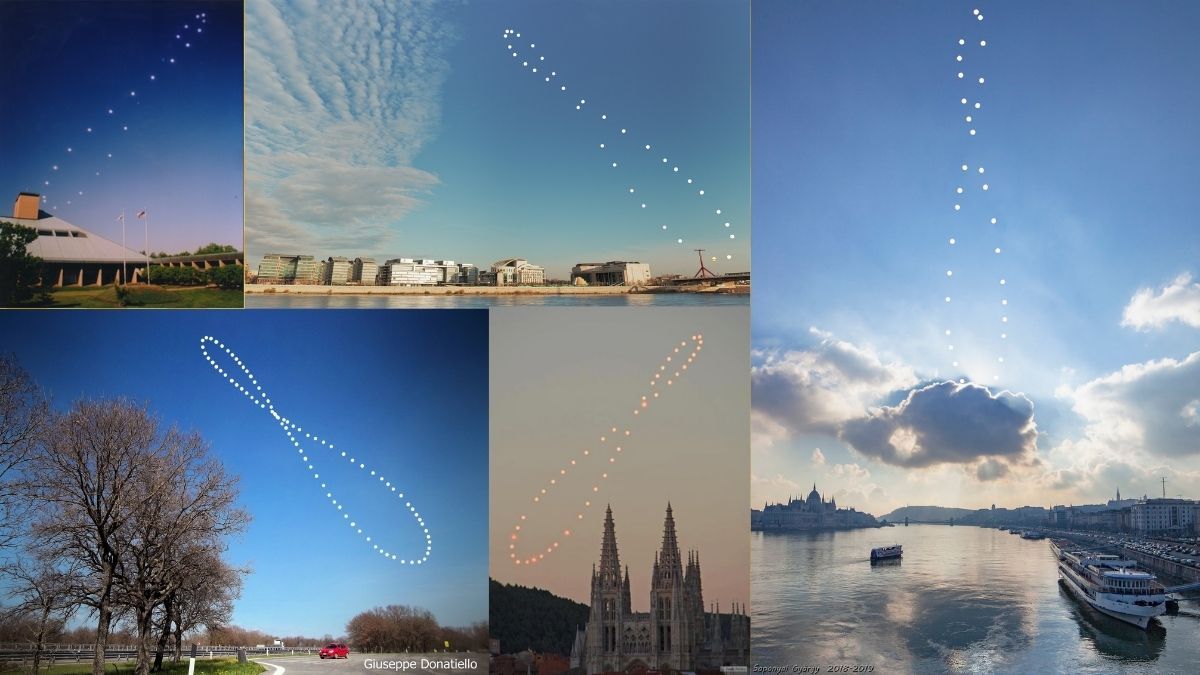 Claim:
A viral piece of media features 48 pictures of the sun composited into a single image.
Rating:

If you take a picture of the sun from the same spot at the same time of day dozens of times throughout the year and composite them into a single image, you'll notice that the sun follows a figure eight-shaped path called an "analemma." Several photographers have accomplished this feat over the years. While the analemma seen in the viral image at the center of this claim is real, it only contains 46 pictures of the sun and was removed from its original setting (an empty sky) and placed into a more dramatic foreground: the Burgos Cathedral in Spain.

In December 2021, an image supposedly comprised of 48 pictures of the sun was recirculated on social media. As many people marveled at the spectacle (the image shows the sun tracing a path that resembles a figure eight or an infinity symbol), some wondered how the image was made, who took it, and if it was even real: This image has been making its way around the internet for nearly a decade. While it truly captures a genuine phenomena known as an analemma, this is a composite image comprising at least 46 pictures of the sun (we counted and recounted, but did not arrive at the 48 claimed) plus one additional picture of an interesting landscape.

What Is an Analemma?

An analemma is the pattern or path the sun makes when viewed from the same place at the same daily time dozens of times throughout the year. The Stanford University's Solar Center explains that sun makes this figure eight path because of the earth's tilt and its slightly elliptical orbit:

If you looked at the Sun at the same time each day, from the same place, would it appear at the same location in the sky? If the Earth were not tilted, and if its orbit around the Sun were perfectly circular, then, yes, it would. However, a combination of the Earth's 23.5 degree tilt and its slightly elliptical orbit combine to generate this figure "8" pattern of where the Sun would appear at the same time throughout the year. The pattern is called an analemma.

While the viral "48 pictures of the sun" image gets the most play on social media, this is hardly the only image to capture an analemma. National Geographic notes that Dennis Di Cicco made one of the first analemma photographs in 1978 from his house in New England. Di Cicco's photograph was created with 44 exposures on a single frame of film — as opposed to dozens of separate photographs later edited together — and also included a two long exposures that showed the sun's daily arc.

Di Cicco told TWAN's astrophotography website: "The analemma was my second year-long photographic attempt at recording it – the first missed the top of the “loop.” It was the first successful photograph of the analemma ever made, and even today it stands as one of only a few showing the scene without a composited foreground. Most people say you have to be nuts to attempt a year-long exposure of the Sun. Those who have succeeded will probably agree!"

You can see Di Cicco's photograph here. Below are a few examples of other Analemma photographs created over the years. 48 Pictures of the Sun

As Di Cicco noted in his comment above, one trick photographers use to create a dynamic photograph of an analemma is to use a composited foreground. In other words, photographs create their image of the sun's path (usually against a blank sky) and then superimpose it into an interesting landscape photograph. That was the case when photographer Jesús Peláez created the "48 pictures of the sun" image circa 2012.

Peláez captured this analemma from his home in Burgos, Spain between August 2011 and August 2012. While this image is frequently circulated with a caption labeling it "48 pictures of the sun," we only count 46 suns in this image. Peláez told the Spanish news outlet Verne that he didn't take pictures some weeks due to weather.

"As I live alone, I had no problem when someone could move the tripod for me, and it was placed next to the living room window for a year ...  The photos are taken once a week or so, therefore, there is scope so that if it is cloudy one day we can take the photo on a different day. Of course, when it's cloudy, you can't take pictures."

Peláez's original analemma picture also featured a dark blank sky in the background, not the Burgos Cathedral seen in the viral image.

Here's a comparison of Peláez original analemma and the viral version he created that features the cathedral. Peláez told Verne that he added the cathedral to the image to make it more impactful, saying: "As is logical, it cannot have the same impact as when you place it next to one of the Gothic jewels of our country."