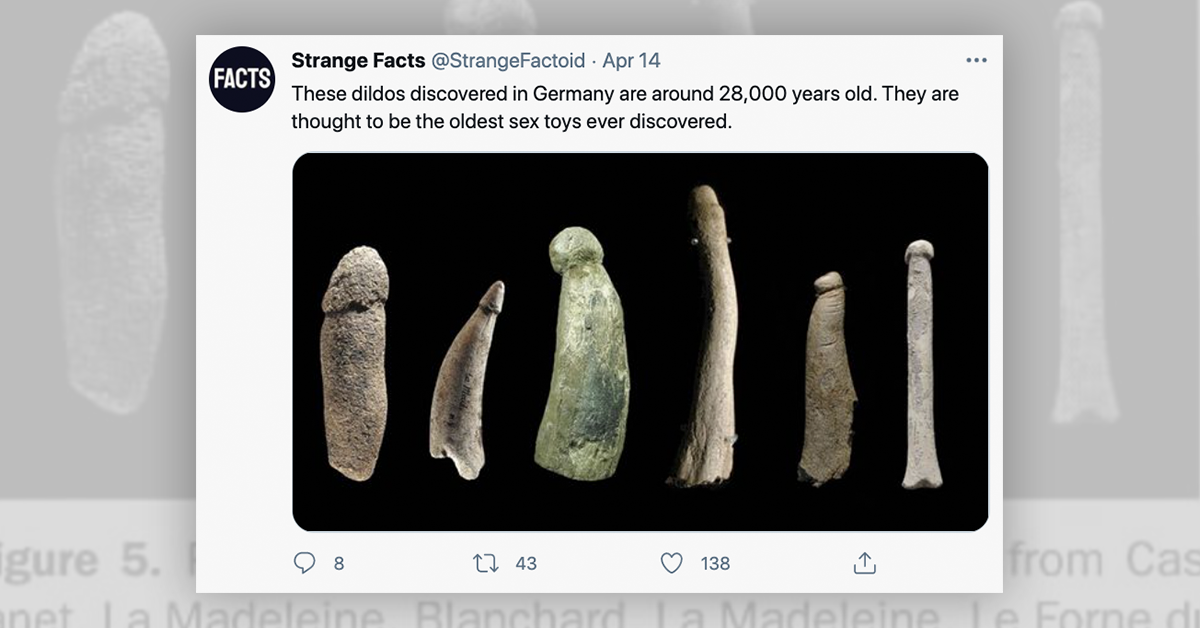 The picture in Strange Facts' tweet saw extensive media coverage after it was included in a 2015 Wellcome Collection exhibit "The Institute of Sexology." This exhibit did include discussion of the Hohle Fels phallus in addition to the objects shown above. However, this picture was originally created as a figure for a 2009 paper in the medical journal Urology that sought to understand how old the practice of circumcision might be by using clues from the archaeological record. Looking at phallic artifacts found in Europe from 38,000 to 11,000 years B.C., the authors noted that "circumcision and/or foreskin retraction of the penis are present in most of the works." As explained in the paper these objects came largely from French archaeological sites — caves used for human habitation — and at least in some cases are hard to date accurately with any specificity. The authors of the study were agnostic about these instruments' potential use as sex toys:

The only real meaning of these devices is that erection was important enough in these people's minds to merit perpetuation.

As reported by the BBC at the time, "the Tübingen team ... already had 13 fractured parts of the phallus in storage, but it was only with the discovery of a 14th fragment ... that the team was able finally to put the 'jigsaw' together."

Using radiocarbon dates of animal bones contained in the same layer as the phallus, the team concluded that the object was between 30,000-26,000 years old. As described by Huffington Post in 2015, "It's eight inches long ... and is as hard as, well, a rock." For scale, here is the phallus as held by German archaeologist Petra Kieselbach during the Tübingen team's announcement: The interpretation of the use of this object is speculative and derived largely from comments made by Nicholas Conard, the primary investigator of the archaeological site, to the media in 2005. Here's how the BBC made that connection in 2005:

Its life size suggests it may well have been used as a sex aid by its Ice Age makers, scientists report.

"In addition to being a symbolic representation of male genitalia, it was also at times used for knapping flints," explained Professor Nicholas Conard, from the department of Early Prehistory and Quaternary Ecology, at Tübingen University....

Researchers believe the object's distinctive form and etched rings around one end mean there can be little doubt as to its symbolic nature. "It's highly polished; it's clearly recognisable," said Professor Conard

The position of the assembled fragments of the stone phallus from the Hohle Fels … supports its function as a striking stone and retoucher for the production of flint tools. … Whether the stone artifact had functions related to its masculine symbolism is difficult to answer.