21 Dead, Many Injured in Ontario

A 'Mad Libs'-style fake news item claimed 21 people were killed in a mass shooting in Ontario (or elsewhere). 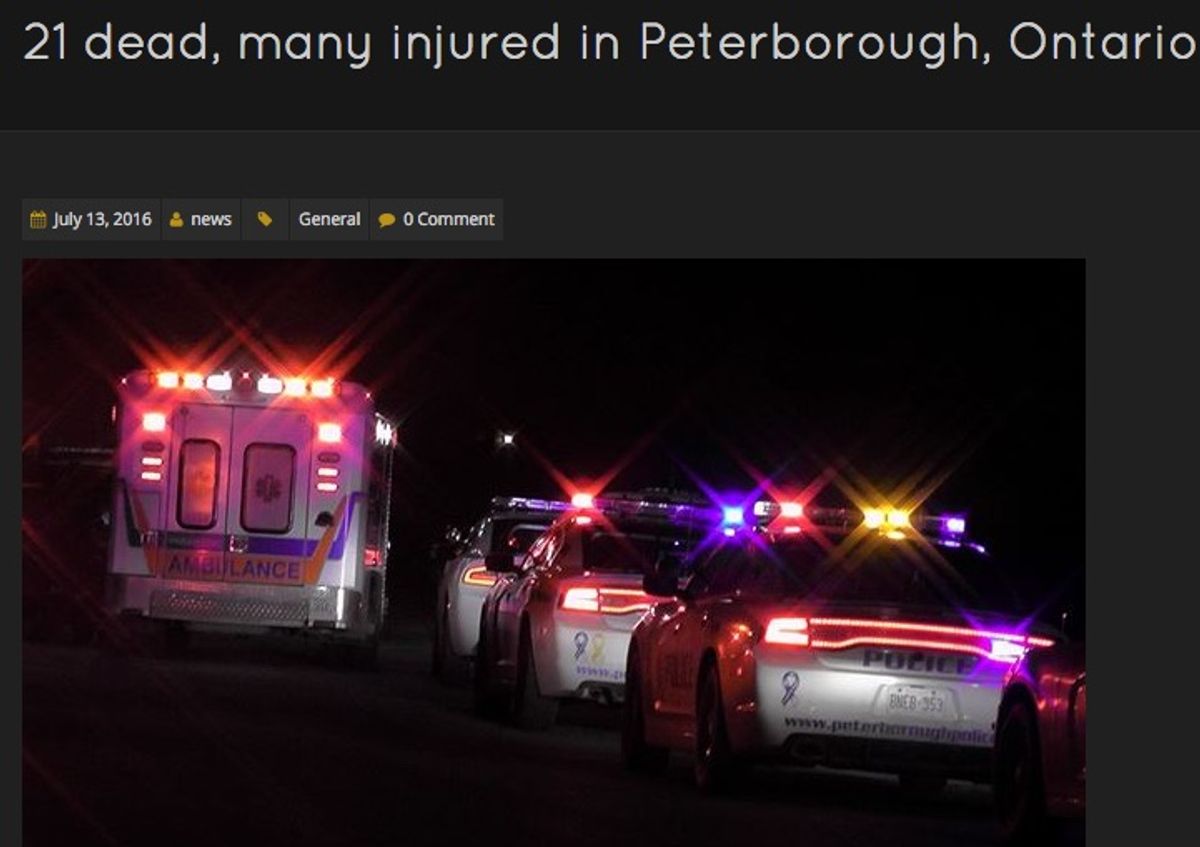 Claim:
Twenty-one people were killed in a mass shooting in Ontario (or other locations).
Rating:

In July 2016 (just after high-profile mass shootings in Orlando and Dallas), articles began appearing online suggesting that CBC News has reported that 21 people were killed in a shooting in Peterborough, Ontario, Canada:

Peterborough, Ontario (CBC) — With the investigation still unfolding, much is unclear about deadly Peterborough shooting.

The police were not able to track down suspects, said officer Nicole Wilson.

One of the eyewitnesses, brother of the deceased, told reporters: “I have no idea why they would do something like this. I have absolutely no idea. I am in shock myself.” He said he last talked to his brother 2 hours ago.

Police tells CBC that one of the guns used in the shootings was legally purchased and traces back to someone believe to be connect with the shootings. The police would not disclose the name of the purchaser.

One of the suspects involved in the Peterborough shootings has been identified but the name is undisclosed. He abruptly left the crime scene after the shootings.

The sources said one of the residences in Peterborough, surrounded by law enforcement is connected to the suspect. It is that house where the chase began that led to the shootout with the occupants of the SUV.

Clicking through on the "CBC News" header led readers to multiple versions of the same story geotargeted to various areas of Canada, all with headlines referencing "21 dead": Searching the text of the post revealed additional fly-by-night web sites using the same template and identical language to "report" 20 dead in various American cities and towns. Either Nicole Wilson was a bi-national law enforcement superwoman, or the "attacks" were all invented to drive traffic to web sites via social media: The image of police cars appended to the Peterborough version of the article was taken from a May 2016 news article about an unrelated incident in the area. The articles and their underlying site design were virtually identical to an earlier cluster of hoaxes claiming non-existent ISIS attacks occurred in a variety of locations in the United States and England.

Although the headers of the articles stated that the reports had been published by CBC News, their underlying URLs were hosted under the domain cbcca.tk and not as part of the legitimate CBC News site, which is markedly different in structure and design):