Did a 1922 Article Advise Not to Worry About Hitler’s Anti-Semitism?

An early New York Times report about Adolf Hitler woefully misjudged the virulence of his anti-semitism. 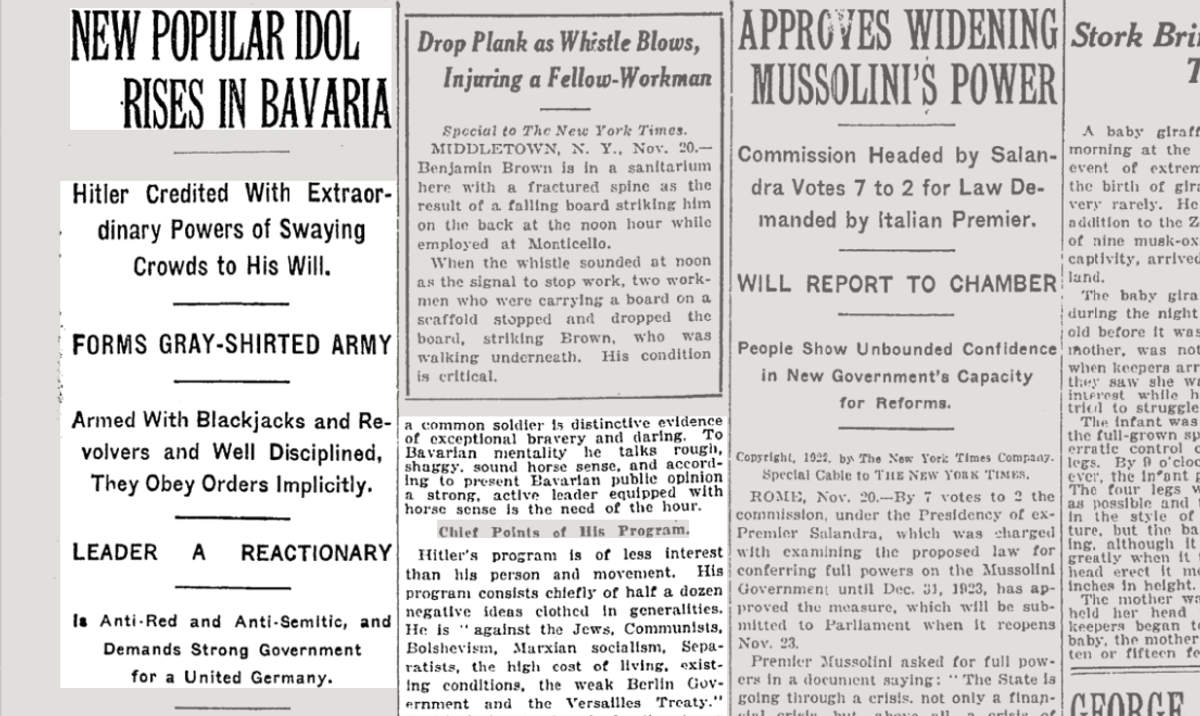 On 10 February 2015, the New York Times re-released the first article they ever published about Adolf Hitler, who was then the chairman of the Nazi party. The story, dated 21 November 1922 and republished in the Times' “First Glimpses” section, opened with this introduction:

On Nov. 21, 1922, The New York Times gave its readers their first glimpse of Hitler, in a profile that got a lot of things right — its description of his ability to work a crowd into a fever pitch, ready then and there to stage a coup, presaged his unsuccessful beer hall putsch less than a year later. But the article also got one crucial point very wrong — despite what “several reliable, well-informed sources” told The Times in the third paragraph from the bottom, his anti-Semitism was every bit as genuine and violent as it sounded.

This re-release was widely covered by other news outlets immediately after it was posted in 2015, with many of them suggesting or implying its description bore similarities to the political movement of then-presidential candidate Donald Trump.

An excerpt from that 1922 article reads as follows:

But several reliable, well-informed sources confirmed the idea that Hitler's anti-Semitism was not so genuine or violent as it sounded, and that he was merely using anti-Semitic propaganda as a bait to catch masses of followers and keep them aroused, enthusiastic, and in line for the time when his organization is perfected and sufficiently powerful to be employed effectively for political purposes.

A sophisticated politician credited Hitler with peculiar political cleverness for laying emphasis and over-emphasis on anti-Semitism, saying: "You can't expect the masses to understand or appreciate your finer real aims. You must feed the masses with cruder morsels and ideas like anti-Semitism. It would be politically all wrong to tell them the truth about where you really are leading them."

This story was published early in both Hitler’s career and in the existence of the Nazi party itself, whose followers were then called ‘Hakenkreuzler,’ or ‘swastika wavers.' In November 1922, when this article was first published, Hitler had been Nazi party chairman for just over a year, and it had been only three years since he had delivered his first public political speech. Hitler’s failed attempt to overthrow the local government in Bavaria, known as the "Beer Hall Putsch," was one year away.

The Times reached out to Hitler for comment in 1922, which he declined, as described in the story:

“Herr Hitler regrets he is unable to meet you as he is leaving town on important business for several days,” was the answer received by The New York Times correspondent. His important business was going to Regensburg with three special trainloads of Munich admirers for the purpose of holding a series of reactionary inflammatory meetings and incidentally to beat up protesting Socialists and Communists with blackjacks if any dare protest, which is becoming increasingly rarer.