Did Vandals Attack 12 Churches in France in One Week?

A Breitbart report re-emerged on social media in the aftermath of the April 2019 fire at Notre Dame Cathedral in Paris. 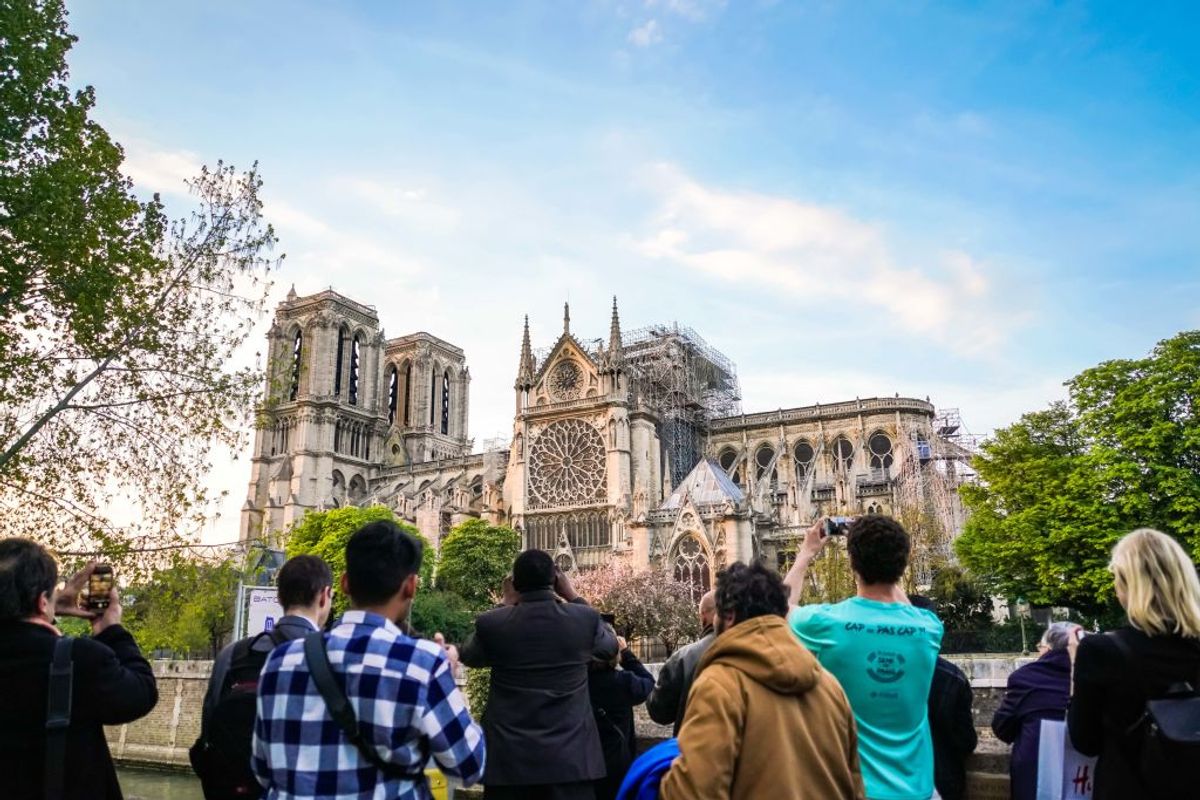 February 2019 saw a series of acts of vandalism in French churches that prompted widespread concern and that one website said constituted the worst month for anti-Christian acts since 2015.

Neither the Breitbart article that cited the number "12," nor its source, nor a website that tracks anti-Christian acts in France actually documented a week in early 2019 in which 12 churches were vandalized.

In the aftermath of a massive fire at Notre Dame Cathedral in Paris in April 2019, some observers made a point of sharing earlier reports about a spate of attacks on Catholic churches throughout that country.

For example, the conspiracy theorist website WND.com posted an article that bore the headline "12 French Churches Attacked Before Notre Dame Inferno" and engaged in provocative but evidence-light speculation that the cathedral fire may have been deliberately set.

The same day as that post, Prosecutor Remy Heitz told reporters no evidence existed that the fire was a "voluntary act," and that an accident was the most likely explanation, although the official investigation was still in its infancy at that time.

On the day of the fire, 15 April, some social media users shared a month-old article published by the right-leaning website Breitbart, along with commentary that showed an intent to connect the Notre Dame fire with earlier acts of vandalism.

On 20 March, Breitbart reported that:

"A dozen Catholic churches have been desecrated across France over the period of one week in an egregious case of anti-Christian vandalism. The recent spate of church profanations has puzzled both police and ecclesiastical leaders, who have mostly remained silent as the violations have spread up and down France."

Breitbart's article prompted several inquiries from Snopes readers about the veracity of the claim that 12 churches were vandalized in France over the course of one week in early 2019.

The Breitbart article cited or alluded to several specific incidents, though it provided a date for only the first of the following incidents:

Although Breitbart's headline announced 12 churches had been attacked and vandalized over one week, the incidents described or alluded to in the article actually comprised eights acts of vandalism at six churches, over a space of more than seven weeks.

As its primary source, the Breitbart article cited a report by the Spanish newspaper ABC, which similarly claimed on 20 March that "a dozen" churches in France had been vandalized in the previous seven days. However, that ABC article also mentioned only the three incidents at Nîmes, Dijon and Lavaur and alluded to the four incidents at two churches in Yvelines, the earliest of which happened on 25 January and 1 February.

A series of acts of vandalism did take place at French churches in February 2019. In the week between 3 and 10 February, there were five incidents at five churches in different parts of the country. However, that is clearly well short of the "12 churches in one week" claimed by Breitbart.

In fact, that rate — less than one incident per day — actually appears to be relatively low, compared to figures available for 2018. According to data provided by two official sources (France's Interior Ministry and the national police), around 700 to 877 acts of vandalism occurred at Christian places of worship in France in 2018, a rate of 1.9 to 2.4 per day.

Breitbart described a pattern which, depending on how you break it down, constituted five incidents in a seven-day period (3-10 February) or seven incidents in a 17-day period (25 January to 10 February). That's a rate of between 0.4 and 0.7 incidents per day, significantly lower than the average over the course of 2018.

Nonetheless, some of the incidents in question were particularly shocking, especially the vandalism at Notre-Dame-des-enfants in Nîmes, in which those responsible broke the church's tabernacle and daubed a crucifix in excrement on the walls of the church.

Those five incidents of vandalism in one week in February 2019 prompted relatively widespread media attention towards the broader trend of vandalism in French churches, including coverage on France Info television and a tweet from French Prime Minister Edouard Philippe, who on 13 February wrote:

"In one week in France, five churches have been vandalized. In our secular republic, we respect places of worship. Such acts are shocking to me and must be universally condemned. I will say as much to the bishops of France during the next Church-state dialogue meeting."

Although Breitbart's article was inaccurate in claiming that 12 churches had been vandalized or attacked in just one week, the month of February as a whole did appear to see an unusually high number of such incidents, at least according to the website Christianophobie.fr, which tracks reports of anti-Christian incidents throughout France.

In publishing their statistics for the month, Christianophobie's Editor-in-Chief Daniel Hamiche wrote that since launching the tracker in 2015, "We have never recorded a month as appalling as February 2019," claiming that the group had identified 15 acts of vandalism and 10 desecrations in France over that 28-day period.