Was the ‘Mahabharata’ Real, Myth, or Both?

The Hindu epic’s possible historical connections have been widely debated. 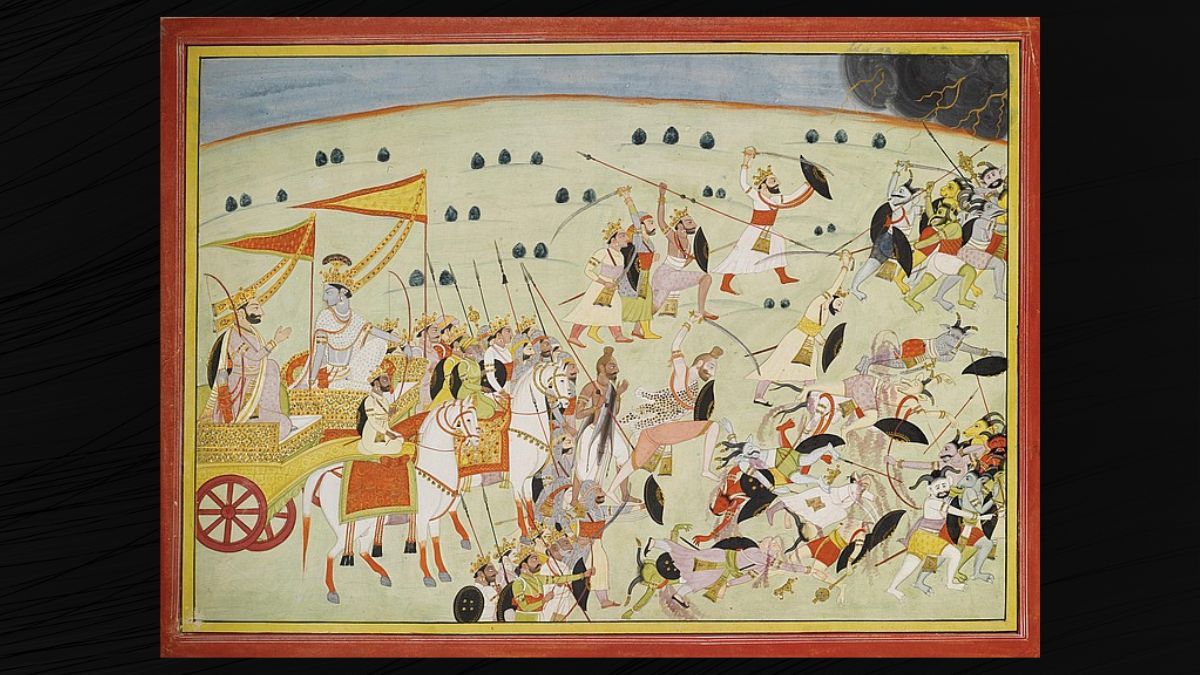 The "Mahabharata" is a Sanskrit epic poem from the Indian subcontinent that is considered one of the foundational texts of Hinduism. At its core, it is a story of an epic battle between two sets of cousins, the Pandavas and the Kauravas. The intervention of gods, fantastical weaponry, and astounding feats of strength place it in the realm of mythology, but numerous scholars have long debated its possible real historical roots.

According to one post on Kreately.in, the events of the “Mahabharata” were real and based on a war “fought around 5000 years ago on the fields of Kurukshetra (modern-day Haryana in India)” between “two groups of cousin brothers.” The post provides the following claims:

Hastinapur is a city located in the present state of Haryana in modern day India. Along with cultural importance and precious heritage, this city is also an historic city in the traditions of Hinduism and India.

The tale of disappearance of Dwaraka city in present day Gujarat is already mentioned and recorded in Mahabharata accurately. Almost 4500-4900 years ago, after the war ended, the city of Dwaraka submerged in sea as a huge flood came there. When the war ended, after some time this city of Lord Krishna had submerged in floods and this event has been recorded in the epic.

Marine excavations and archaeological discoveries at the sunken part of this city also give proofs of the epic. The objects and places discovered from the marine site have references and mentions in Mahabharata. Also many structures present there are related to those times when Mahabharata happened.

All the places, instances, countries etc. which are mentioned in Mahabharata are in this real world! Places like Dwaraka, Kurukshetra and Hastinapura; all are present in real life world. This is a big proof for those people who think that like other epics, Mahabharata is also a fictional story.

We should note that this website describes itself as “much more than just being one of the top Pro-Hindutva [organizations],” and claims to be against “Hinduphobia” around the world. Hindutva is also defined as Hindu nationalism, which is the idea that the Hindu faith and culture should shape the politics of the modern Indian state.

Is there any truth to the claims being posted on this website? There is indeed a real city of Kurukshetra in the modern Indian state of Haryana, where according to the text a battle did occur 3,000 or 5,000 years ago, though the "Mahabharata" was written roughly 2,000 years ago.

Archaeologists and historians have been looking for evidence for numerous events that took place in the epic text. In 2017, the Archaeological Survey of India (ASI) approved excavations at what many believed was the “house of wax,” an important moment in the text. In 2020 reports said archaeologists had discovered artifacts with strong “cultural resemblance” to those found at sites such as Hastinapur, Indraprastha, Kurukshetra, and Mathura, all of which are mentioned in the "Mahabharata." The whole effort is called the Lakshagriha Excavation Project, named after the “labyrinth-like chamber built of highly flammable lacquer by the Kauravas to burn alive the Pandavas, who foiled the plot and escaped through a tunnel.”

According to the historians of Early India, the Sanskrit epic, the Mahabharata, can certainly be used as a source of history provided one can identify its internal chronology. Broadly speaking, the composition of the Mahabharata has been dated between c. 400 BCE and c. 400 CE – although some historians ascribe a much shorter period of just 150 years, from the mid-second century BCE to the year zero, while others believe that it could have even been written over a thousand year period. Undoubtedly a critical study of the Mahabharata can inform us about political ideas and social institutions during this long period, spanning from c. 500 BCE till about 500 CE. What is, however, far more difficult is the exercise of tracing material evidence for specific incidents or buildings described in the epic, for instance, the “house of wax”. The discipline of archaeology remains marginalised in most universities and it may be more fruitful if money was instead utilised for creating some “world class” departments of archaeology in a few of our universities.

She also referenced past excavations at the sites of Hastinapur, Dwarka, and elsewhere. As mentioned in the Kreately post, “Dawaraka” was submerged by a flood. According to the National Institute of Oceanography (NIO), excavations took place in the purported city (several claims have been made about other locations for the ancient city of Dwarka) in 1963 and 1979-1980. These excavations respectively dated the earliest settlement there as being in the 2nd century B.C. and the 14th century B.C. Their underwater explorations discovered a number of stone structures that could point to the existence of an ancient harbour, however the NIO pointed out “in absence of any absolute date from offshore region, it is difficult to assign any date to these structures.”

The 1976 text “Mahabharata: Myth and Reality,” by archaeologist S.P. Gupta and K.S. Ramachandran, attempts to summarize the various disagreements between senior experts on whether key events in the Mahabharata actually took place. The article argued that the debate commenced in earnest in 1975, when historian D.C. Sircar declared unequivocally to the United News of India that the Mahabharata “was a myth, devoid of little historicity.” After that, historians and Vedic scholars came out with an avalanche of articles expounding their views.

Sircar’s main arguments against the theory included that there was no reference to the “Great War” in Vedic literature; the exact period of when the Mahabharata took place was even unknown to the Indian people; and prior to the 4th century B.C. the “Bharata War” was not mentioned in literature. Archaeologist H.D. Sankalia contended that the battle in the "Mahabharata" was "largely a family feud," similar to ones in ancient Greece and Troy. He referred to weapons made of iron, which were not in regular use before the 6th century B.C. and unknown before 1100 B.C. Sankalia argued that “archaeology has conclusively proved that the critical editions of the epics are not older than the 4th or 5th centuries A.D.”

However, other scholars disagreed. Historian V.N. Datta said, “long before the Mahabharata battle the tradition of fighting persisted in the Kuruksetra region, a scene of tribal conflicts of the prehistoric and early Vedic times. This tradition was popular even at the time of Hieun T’sang’s [Chinese traveler and scholar] visit, in the seventh century A.D. to Kuruksetra. He stated that a terrible fight had taken place in the Thaneswar region in remote times so that the entire area was covered with bones that were still visible to him.”

The report outlines the views of a range of proponents of the “Mahabharata’s” historicity, who propose a number of dates for the Great War. B.B. Lal, an archaeologist and former director general of the Archaeological Survey of India, said the “Mahabharata” was not just a myth because of his correlating archaeological evidence with traditional accounts. He argued that most of the important sites from the main story yielded the same kind of painted grey ware pottery that was from the same period as the epic. His extensive research often focused on connecting Hindu epics, Indian history, and archaeology, but he was both disputed and acknowledged as a leading intellectual.

Gupta and Ramachandran conclude that based on numerous evidence and arguments, the “Mahabharata” was “a reality” that came from an “event [that] was significant and must have been of such a magnitude as to have attracted the attention of great writers and balladeers.”

Lal’s excavations of an unrelated site at Ayodhya became a political firestorm, with many accusing him of stoking communal tensions by claiming there were remains of a Hindu temple at the same site of a mosque. His claims had evolved from the 1970s, starting with him saying the excavations were “devoid of any interest” to changing his assessment completely by 2008. He and a group of archaeologists at the World Archaeological Congress (WAC) in 1994 even got physical onstage with opposing members who wanted to read a petition against the mosque demolition. Numerous experts disputed his conclusions at the site, including Varma.

Lal, who died in September 2022, defended himself later on, saying: “The climate of the time would suggest that I’m saffronising history. That is a great tragedy. I only ask everyone to look at the facts.”

The extent of history within the Hindu epic is going to continue to be uncovered and debated for years to come, but the overlap between Hindu nationalist sympathies and proponents of the "Mahabharata’s" connection to reality should not be ignored. There are certainly enough arguments on both sides, and even as details of specific events will continue to be debated, the relevance of the great epic remains undisputed.

“ASI Approves Excavation at Site of Mahabharata’s ‘house of Lac’.” The Times of India, 2 Nov. 2017. The Economic Times - The Times of India, https://timesofindia.indiatimes.com/india/asi-approves-excavation-at-site-of-mahabharatas-house-of-lac/articleshow/61428457.cms. Accessed 16 Sept. 2022.

“Ayodhya: Evidence From Excavation Does Not Support ASI’s Conclusion About Temple.” The Wire, https://thewire.in/history/ayodhya-dispute-excavation-evidence-temple-asi. Accessed 16 Sept. 2022.