Before alarm clocks became common, someone had to wake up workers in industrialized England. 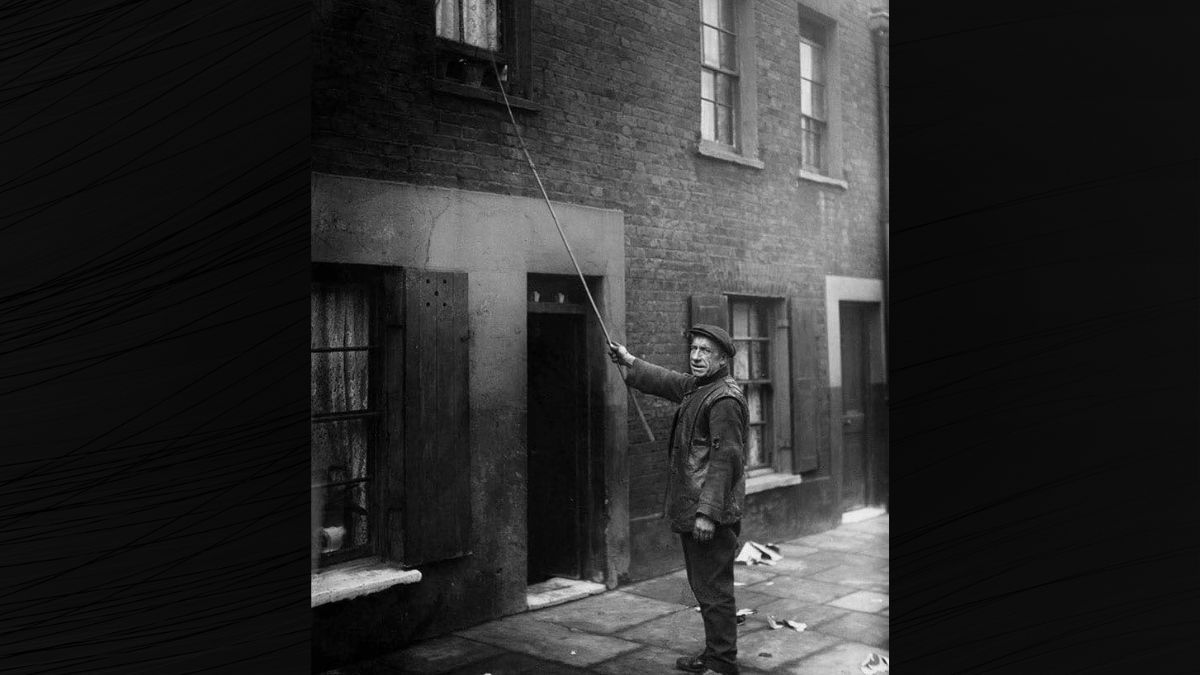 Before the average industrial worker in England had access to alarm clocks, someone needed to wake them up. This fell to the “knocker-ups,” or “knocker-uppers,” or simply “knockers” who would go around working-class neighborhoods around Britain with sticks, pea-shooters, poles or anything else that would help them knock on doors and windows to get people up.

This practice continued through the age of industrialization into the 1960s, and waned as more people could afford their own watches and clocks with alarms. According to the BBC, knocker-uppers were common in mill towns in northern Britain, or in London where dockers had unusual hours, and even with brewery workers in less industrial towns in Dorset. This particular photograph can be found on Getty Images and shows Charles Nelson of East London in 1929. Nelson, according to Getty, had been working as a knocker for 25 years, and would wake up early morning workers such as doctors, market traders and drivers.

The people who relied on this service were largely poorly paid, had to work shifts, and could not afford their own watches.

A 2020 report in the Journal of Victorian Culture, “Knocker Ups: A Social History of Waking Up in Victorian Britain’s Industrial Towns” described how the practice came about:

In pre-industrial societies, people organized their activities around diurnal and seasonal rhythms. Historians have argued that in contrast, industrialized societies became preoccupied with time and watching the clock. Time became money. Beginning work at factories at a fixed hour in the day became crucial for both factories and workers. In particular, wages of industrial workers became bound by time – if they failed to report to their duties on time they were fined. Within this context, knocker ups emerged in British industrial society to perform the vital duty of waking up industrial workers. Consequently, they became an integral part of the service industry created to cater to working-class clients. By waking up industrial hands on time, knocker ups contributed to industrial productivity. Usually, knocker ups went around industrial towns waking up clients with their innovative tools. Some used sticks and canes while others shot peas through pipes. Either way, the knocker ups used their creative ways to let their clients know it was time for them to wake up.

Manchester Metropolitan University has archival videos of knocker-uppers in 1940s Burnley, Lancashire, using poles to rap at people’s windows and wake them up.

Some of the earliest references to knockers were found in newspapers in 1850, in which the profession was described as “all profit” and where many young workers were willing to employ the knockers and pay them so they wouldn’t risk being late for work and get fined. An 1878 report in the Canadian paper, Huron Expositor, Mrs. Waters, a knocker-upper in the north of England, described how she woke people up who were sleeping through their alarm clocks.

The reason why knocking-up is so widespread nowadays is this: people get so used to the alarum clock that it fails to awake them, or if it awake them, they are at times so sleepy that they drop off again before the alarum runs out. This was the case with the person who asked me to awaken him ; he had lost many mornings through over-sleeping the time. He was in the designing line ; and he said he got more work done and of a better sort, during the quiet hours of morning [...]

After a year, she had 30 customers who required her knocking services, and after five years she had 80 houses where she woke up the occupants. She earned different amounts of pay from different homes. She described how initially the knockers used to rap on front doors or ring doorbells, but found it was waking up their neighbors.

"The public complained of being disturbed [...] by our loud rapping or ringing; and the knocker-up soon found out that while he knocked up one who paid him, he knocked up several on each side who did not," she said.

So they modified a long stick that they used to tap on the bedroom windows of their clients, soft enough to not disturb neighbors but loud enough to awaken those sleeping inside. Some knocker ups used peashooters, fishing rods, and more implements.

Many knockers also awaited responses from clients before they moved on. But one man recalled to the BBC that in his childhood, the knocker “wouldn't hang around either, just three or four taps and then he'd be off.” And in the winter months when workers struggled to wake up, demand for their services increased, as did their charges.

The end of the knockers came with the increased access to clocks (though adjustable alarms had been in existence since the mid-19th century). According to the Journal of Victorian Culture:

The working class had a love/hate relationship with the knocker ups, as they found their charges taxing but could not do without them. Meanwhile, some within the more privileged classes developed a strong distaste toward the profession. Furthermore, by the 1870s, the costs of hiring knocker ups had become a crucial part of labour union dialogues with factory and mill authorities. As a result, many factories began using electric buzzers to wake workers in the vicinity and sometimes even suggested that the workers should buy cheaper alarm clocks to counter the recurring costs of hiring knocker ups. Capitalizing on this push for alarm clocks from the industries, alarm clock makers slowly began to attract attention and acceptance in industrial towns.

This job was not just limited to Britain. French and Italian towns had similar people roaming the streets at odd hours waking up their clients, but they often relied on shrill whistles instead of discrete window taps.

And who woke up the knocker-upper? A tongue-twister from the time addressed this question:

“Charles Nelson of Hoxton in East London Has Been Working as a…” Getty Images, https://www.gettyimages.com/detail/news-photo/charles-nelson-of-hoxton-in-east-london-has-been-working-as-news-photo/3381657. Accessed 8 Aug. 2022.