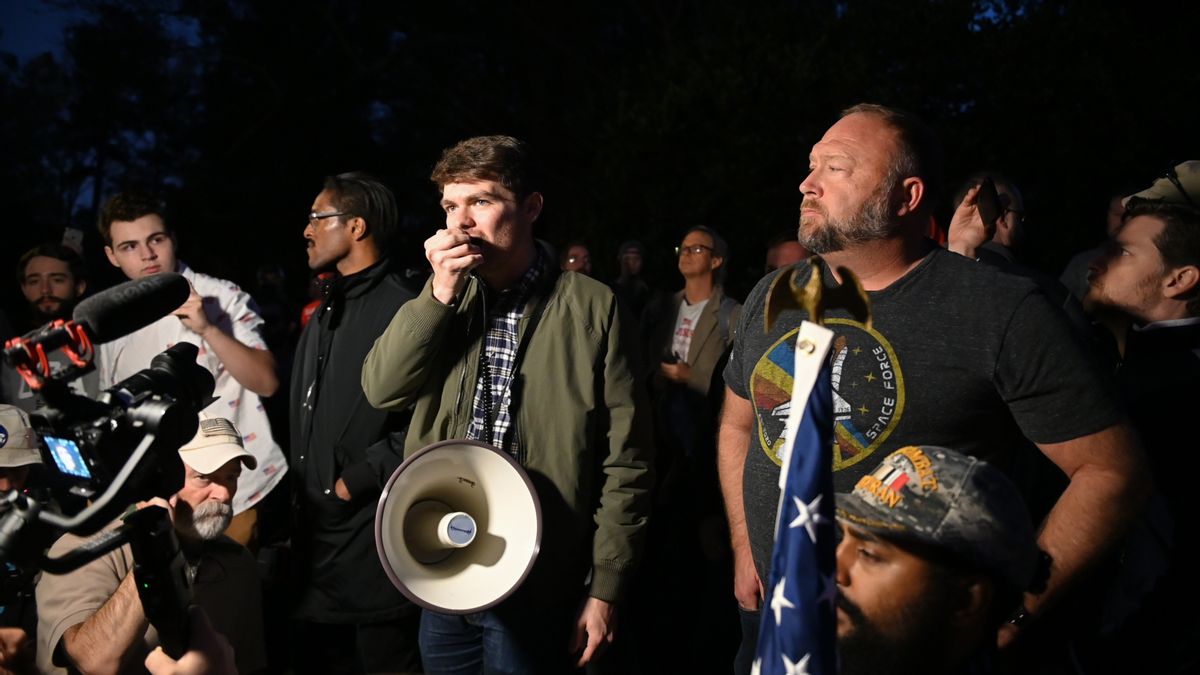 Fuentes was first banned in July 2021 for what Twitter said were "repeated violations" of its rules, according to Forbes.

He was then banned a second time after creating a new account in October 2022, just after Elon Musk took ownership of the social media platform, Axios reported. This ban of the newly-created account, @spookygoblin8, came just prior to a massive number of employee resignations and layoffs that resulted from Musk coming onboard.

Three months later, on Jan. 24, 2023, records showed that access to his original account, @NickJFuentes, had been restored.

Fuentes was suspended again early the next day.

We reached out to Twitter with questions and will update this story if we receive a response.

According to a video, during Fuentes' brief return to the platform, he had taken part in a Twitter Spaces audio discussion in which he had passionately said that he "loved" Adolf Hitler.

We found other claims about Fuentes' participation in the Twitter Spaces conversation in a tweet from Hannah Gais, a senior researcher and journalist with the Southern Poverty Law Center.

According to The Daily Beast, within the hours that Fuentes could access his account, he shared a GIF of a Ye 2024 logo changing into the message "DEFCON 3," which was referred to by the publication as a "reference to one of the disgraced rapper's tweets vowing to go 'death con 3 on Jewish people.'"

We archived a Google cache snapshot that showed a GIF that showed the letters and numbers "Ye 2024."

The Daily Beast also previously reported that Fuentes said he was working with the rapper formerly known as Kanye West for the latter's 2024 U.S. presidential campaign.

In November 2022, Fuentes and West dined with former U.S. President Donald Trump at his Mar-a-Lago club, which led to The Associated Press headline, "Trump faulted for dinner with white nationalist, rapper Ye." The reporting said that Trump was "renewing attention to his long history of turning a blind eye to bigotry."

West previously came under fire in late 2022 after he praised Hitler during an interview with conspiracy theorist Alex Jones. He also tweeted a picture of a swastika with the Star of David.

Additionally, Fuentes joined in on the Unite the Right rally in Charlottesville, Virginia, in August 2017, and previously sat down for a photo with Arizona Republican Congressman Paul Gosar, according to The Daily Beast.

Fuentes wasn't the only far-right activist who was suspended on Jan. 25. Stop the Steal organizer Ali Alexander was also banned on the same day.

Alexander was involved in organizing the rally that led to the Jan. 6 Capitol riot.

The AP previously reported the following of Alexander's involvement on Jan. 6, 2021:

As the event was underway and as Trump was speaking, a large group of people made its way to the Capitol, among them members of far-right extremist groups like the Proud Boys and Oath Keepers who forcibly entered. Some dressed in tactical vests and helmets and marched toward the door in a military-style formation.

One of the organizers who was subpoenaed, Ali Alexander, said after the riot that the intention was to direct attendees of the larger rally to march to the Capitol. In his subpoena, the panel cited media reports that Alexander had made reference "to the possible use of violence to achieve the organization's goals" and had been in communication with the White House and members of Congress.

This story will be updated with any further developments.