"He completely ignored the fact that I am a human," Bridges told us. "He went ahead to incorrectly and harmfully tell my story." 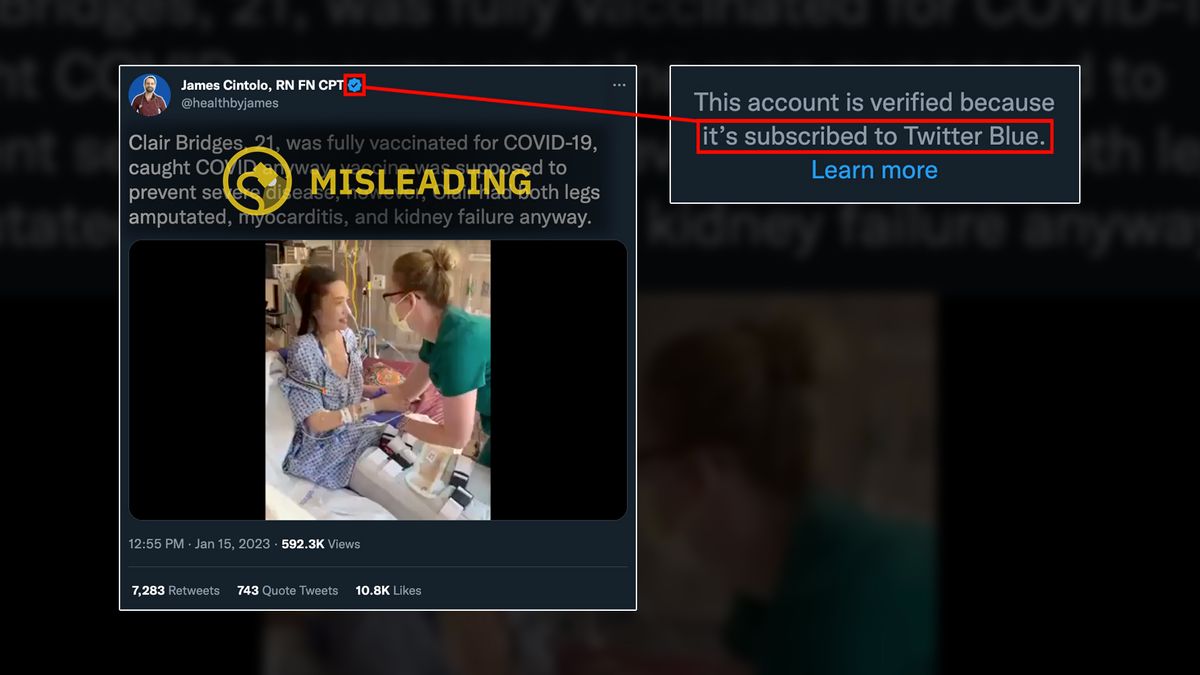 On Jan. 15, 2023, Twitter user @healthbyjames tweeted a video with the caption, "Clair Bridges, 21, was fully vaccinated for COVID-19, caught COVID anyway, vaccine was supposed to prevent severe disease, however, Clair had both legs amputated, myocarditis, and kidney failure anyway."

According to Claire Bridges, whom we interviewed for this story, the implication in this tweet about her vaccination status was misleading. In fact, the tweet was so inaccurate that even Bridges' first name was twice spelled incorrectly. 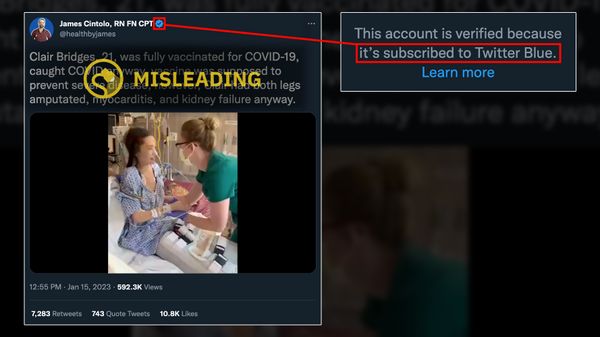 Anyone can receive this blue checkmark for $8 per month.

Reporting from AFP that detailed another purportedly inaccurate tweet from Cintolo identified him as "a Boston-based nurse who writes about supposed adverse events following COVID-19 vaccination."

Despite the misleading nature of Cintolo's tweet, the video attached to the message showed a count of nearly 600,000 views, showing just how many people may have seen the post. The tweet also received more than 7,000 retweets and 10,000 likes. The video originally came from Bridges' Instagram account and was reposted to Twitter without her permission.

We reached out to Bridges to find the truth about her story. According to local reporting, she is a resident of St. Petersburg, Florida.

We first asked about her vaccination status and looked to find out information about her COVID journey. By email, Bridges pointed out something very important that Cintolo did not include in his misleading tweet: She was born with a heart condition.

Here's what she told us:

I was vaccinated 7 months prior. The reason why my bout with COVID was so severe is tied to the fact that I have a congenital heart condition.

When I got COVID, a complication that arose from COVID was Rhabdomyolysis. Rhabdo attacks your muscles, the heart being a muscle and mine being so weak (it was already unable to efficiently pump blood where it needed to go). When the Rhabdo kept progressing, my health kept falling. Less oxygenated blood where it needs to be, severe dehydration, on top of all the other symptoms one deals with when they're sick from COVID. My legs began to go necrotic and in order to prevent sepsis they had to amputate. My legs were amputated due to COVID/Rhabdo, not the vaccine.

For anyone who doesn't have any of the facts to say anything different than that, is extremely rude, harmful and disrespectful.

In regards to his claim that I had myocarditis and kidney failure, I did. However, it wasn't just my kidneys that failed, it was everything. I flatlined three times. On Jan. 16, 2022, I was put on life support, including 24-hour dialysis.

In our second question, we asked specifically about Cintolo's misleading tweet.

That Twitter account did not have permission to use my story. He also misspelled my name and left out key information so he could twist my story to push his personal agenda. His post has caused people to start up on my Instagram with hateful and rude messages to me. He completely ignored the fact that I am a human, what my loved ones and I went through was traumatic, and he went ahead to incorrectly and harmfully tell my story. A day or so before my death/alive day too, so it was just lovely receiving these horrible comments a day after my one-year anniversary of flatlining.

A Special Thanks to Caregivers

Our last question to Bridges was to find out if she'd like to extend thanks for those who cared for her during her treatment and recovery. She mentioned a good number of caregivers, many of which had been featured on her Instagram account:

Yes! I don't thing anyone's ever asked me this so thank you. There are literally so many places and people that helped me but all my care givers, doctors, surgeons, and nurses at Tampa General Hospital and Mount Sinai Hospital. Steve Chamberlain's 50 legs Org., Prosthetic and Orthotic Associates of Orlando, Grassroots Kava House and Vertical Ventures (they're my kava and climbing community who held fundraisers and had my back the entire time), and obviously my family & friends who took care of me physically & mentally.

This story will be updated if we uncover any further details.