A Bangkok Restaurant Has Had Beef Soup Cooking Continually for 45 Years?

It's a technique called "hunter's stew," which entails always using the same stock from the current day's soup for the next day's soup. 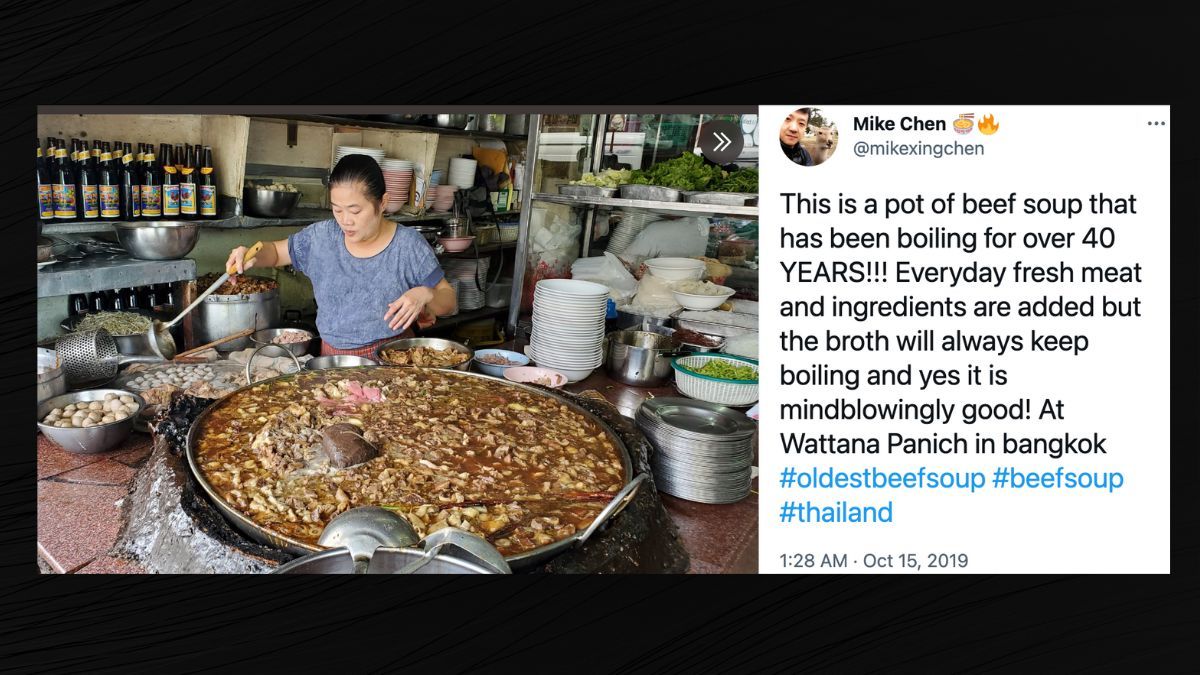 A restaurant in Bangkok, Thailand, has gained world fame for its beef soup that has been continually simmering, in one form or another, for half a century. The restaurant, Wattana Panich, is located in the Ekkamai neighborhood of the Thai capital city, and has generated recent press attention for its beef soup. The soup has been a source of curiosity online, as well.

"TIL the wattana panich in Bangkok restaurant is serving a Thai beef noodle brew that has been simmering for 45 years," one Reddit user stated in a 2019 post:

"This is a pot of beef soup that has been boiling for over 40 YEARS!!! Everyday fresh meat and ingredients are added but the broth will always keep boiling and yes it is mindblowingly good! At Wattana Panich in bangkok," YouTuber Mike Chen wrote on Twitter, also in 2019:

Although some articles and online commentary say the restaurant has been cooking the soup continuously for half a century, that might lead to some misconceptions that the restaurant's owner, Nattapong Kaweeantawong, clarified in a 2019 NPR story:

"Lots of people think we never clean the pot," Kaweeantawong told NPR. "But we clean it every evening. We remove the soup from the pot, then keep a little bit simmering overnight."

It's a technique that travel-and-culture site Atlas Obscura referred to as "hunter's stew," or "perpetual stew," an old practice of using the current day's broth to start the next day's soup. Although Wattana Panich got a lot of attention for such a recipe (which has seasoning kept secret by the family-owned establishment), a 2017 story published by The New York Times described a similar practice by a restaurant in Tokyo, Japan:

Perpetual stews and master stocks have similarly prolonged lives. The century-old restaurant Otafuku, in the Asakusa district of Tokyo, specializes in a long-simmered stew called oden, with a base of dashi broth first made in 1945. (The kitchen lost its original batch, said to have dated back to the restaurant's opening in 1916, in an air raid during World War II.) It's constantly replenished with new ingredients, but a trace of the past remains, as with a cast-iron pan never scrubbed, only rinsed, or a Chinese Yixing teapot, whose porous clay walls absorb the flavors of each brew until you could put nothing in the pot but water and still taste tea.

Kaweeantawong told NPR that the restaurant doesn't keep a written recipe for the soup. Since his grandfather owned the restaurant, they have always gone purely on taste. "So the person making the soup will constantly have to taste it to know what needs to be added," he said.