A folklorist explains how Halloween continues an ancient Celtic tradition of celebrating the dead. Group of young friends dressed in costumes dancing and playing together at a Halloween party. One of their parents is playing alongside them, also dressed in a costume.

This article by Tok Thompson is republished here with permission from The Conversation. This content is shared here because the topic may interest Snopes readers; it does not, however, represent the work of Snopes fact-checkers or editors.

As Halloween approaches, people get ready to celebrate the spooky, the scary and the haunted. Ghosts, zombies, skeletons and witches are prominently displayed in yards, windows, stores and community spaces. Festivities center around the realm of the dead, and some believe that the dead might actually mingle with the living on the night of Halloween.

Scholars have often noted how these modern-day celebrations of Halloween have origins in Samhain, a festival celebrated by ancient Celtic cultures. In contemporary Irish Gaelic, Halloween is still known as Oíche Shamhna, or Eve of Samhain

[You can listen to articles from The Conversation, narrated by Noa, here.]

As a folklorist with a special interest in Celtic culture, I find it interesting to note the longevity of this holiday: The celebration of the dead on Halloween is not a recent innovation, but rather one of the oldest surviving traditions that continues today as a vibrant part of many peoples’ lives.

In ninth century Irish literature, Samhain is mentioned many times as an integral part of the Celtic culture. It was one of four seasonal turning points in the Celtic calendar, and perhaps the most important one. It signaled the end of the light half of the year, associated with life, and the beginning of the dark half, associated with the dead.

Archaeological records suggest that commemorations of Samhain can be traced back to the Neolithic period, some from 6,000 years ago. Neolithic Ireland had no towns or cities, but did craft huge architectural monuments, which acted as seasonal gathering spots, and housed the remains of the societies’ elites.

These megalithic sites, from the Greek “mega” and “lithos,” meaning big stone, would at times host vast numbers of people, gathered together for brief periods around specific calendar dates. Archaeological records reveal evidence of massive feasts, yet little to no evidence of domestic use. If people did live year-round at these sites, they would have been a select few.

Data from animal bones can reveal approximate time periods of the feasts, and further data comes from the monuments themselves. Not only are the monuments situated in key places in the landscape, but they are also carefully celestially aligned to allow the sun or moon to shine directly into the center of the monument on a particular day.

These sites connect the landscape to the cosmos, creating a lived calendar, scripted in stone. The UNESCO World Heritage monument of Newgrange, for example, is built so that a shaft of sunlight illuminates the innermost chamber precisely on the day of winter solstice. 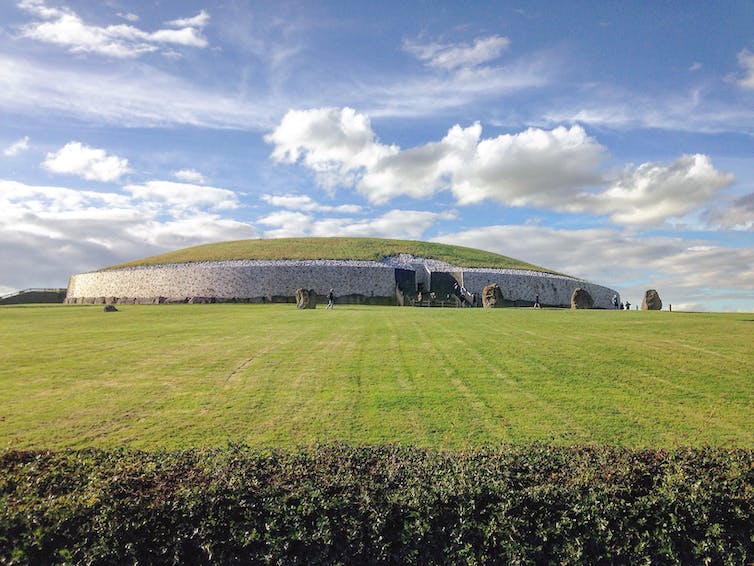 Ancient monuments such as the Newgrange have been carefully celestially aligned. Tjp finn via Wikimedia Commons, CC BY-NC

Less than 30 miles away lies the hill of Tara, another massive megalithic site. The Mound of Hostages, the oldest extant megalithic structure at Tara, is aligned to Samhain. Tara is known as the traditional spiritual and political capital of Ireland, and here, too, archaeologists have found evidence of mass seasonal gatherings of people, with the remains of feasts and great bonfires.

The Spirits of the Dead

According to early Irish literature, as well as traditional folklore collected in the 19th century, Samhain of long ago was a time for people to come together, under a command of peace, to feast, tell stories, make social and political claims, engage in important sacred rituals and, perhaps most importantly, to commune with the dead.

Not only were there particular days that one might encounter the dead, but particular places as well, these being the same megalithic sites. These sites are known in Irish Gaelic as “sí” sites, but there is another meaning of the word sí in Irish, that being the spirits of the mounds. This is often translated into English as “fairies”, which loses a great deal of meaning. “Fairies” in Ireland are spirits deeply connected with the realm of the dead, the mounds, and, perhaps most especially, Samhain.

The connection can be witnessed in the figure of the banshee – or bean sí, in Irish – an important mythological figure in Irish folklore, believed to be heard wailing with grief directly before the death of a family member. With Irish “bean” meaning simply “woman”, the banshee is thus a female spirit of the mounds, and a ruler of the realm of the dead.

The sí spirits are not only spirits of the dead, but they are also a particular aristocracy of the dead, who host the dead with feasting, merriment and eternal youth, often at the age-old megalithic sites. In Irish lore, they are powerful and dangerous, able to give great gifts or exact great damage. They once ruled Ireland, according to folklore, and now they rule the world of the dead.

The Otherworld is always there, but it is on the beginning of the dark half of the year, the evening of Samhain, now Halloween, when the dead are at their most powerful and when the lines between this world and the next are erased.

As the light of summer fades and the season of darkness begins, the ancient holiday of Halloween continues to celebrate the dead mingling with the world of the living once again, as it has for thousands of years.

Tok Thompson is a professor of anthropology at USC Dornsife College of Letters, Arts and Sciences.