UK Prime Minister Forced from Office Amid Economic Turmoil, Chaos in Parliament and a Party in Tatters

Only months into the job, Prime Minister Liz Truss is on her way out already, leaving her government in search of a new leader and a way to regain public trust. 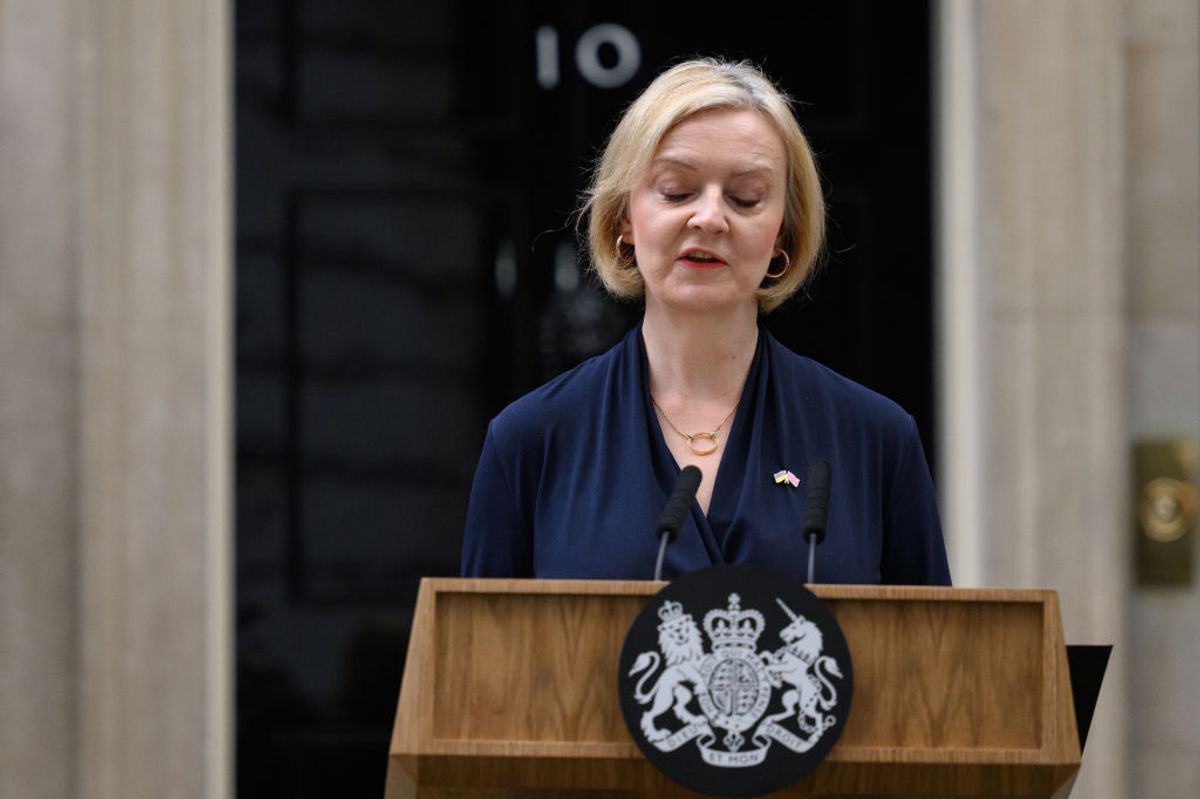 This article by Garret Martin is republished here with permission from The Conversation. This content is shared here because the topic may interest Snopes readers; it does not, however, represent the work of Snopes fact-checkers or editors.

The U.K. government is in tatters after Prime Minister Liz Truss resigned on Oct. 20, 2022 – the second leader to be forced out in mere months. It follows an economic mess largely of her own making that resulted in U-turns, a high-profile firing, curious absences and plummeting support.

The resignation means that Truss will go down as the shortest-lived U.K. prime minister in history.

So what exactly has gone wrong, and what happens next? The Conversation asked Garret Martin, an expert on U.K. politics at American University School of International Service, to explain all.

Who is Liz Truss and How Did She Become Prime Minister?

Liz Truss was, until Oct. 20, both the leader of the Conservative Party and the nation’s political leader – albeit she was not put in place by the electorate. In early July 2022, then-U.K. Prime Minister Boris Johnson, having lost the support of his party after a series of scandals, resigned as leader of the Conservatives. Instead of stepping down immediately as prime minister, Johnson announced that he would stay on until his party had selected a successor.

That leadership election proceeded in two distinct steps over the course of the summer. Through a series of votes, Conservative members of Parliament whittled down the list of candidates to two finalists: Truss, who served as foreign secretary, and former Chancellor of the Exchequer Rishi Sunak. It was then up to the wider members of the Conservative Party to pick between the top two. On Sept. 5, Truss was formally announced as the winner, with 57.4% of the votes, paving her way to become the new prime minister.

What Caused Her Trouble?

Truss came to office amid extremely difficult circumstances. Queen Elizabeth II died within a few days of her taking over from Johnson. That removed the promise of any new leadership “bounce,” as the nation was plunged into an official period of mourning.

Overseeing the transition to a new monarch only added to the plethora of thorny challenges affecting the government, including the war in Ukraine and the threat of Scottish secession, as well as the severe energy and inflation crises.

But if any observers expected caution from Truss, they were rapidly corrected. On Sept. 23, then-Chancellor of the Exchequer Kwasi Kwarteng outlined a bold “mini-budget” to Parliament. This new plan promised growth for a struggling U.K. economy, relying on a massive package of tax cuts. It would have represented the biggest tax cut in half a century, with benefits predominantly for richer segments of the population.

This was not a complete surprise, since Truss had campaigned on such a platform during the leadership election. Yet the scale and speed of the announcement were stunning, an example of what BBC journalist Nicholas Watt referred to as “shock and awe” tactics.

It was an audacious gamble by Truss – and one that completely failed to convince the markets. Within days of Kwarteng’s announcements, the pound had plummeted in value, leading British borrowing costs to shoot up. Meanwhile, soaring interest rates piled on misery to millions in the U.K. in the shape of higher mortgage payments.

The International Monetary Fund piled on as well, urging the U.K. government to “reevaluate” the planned tax cuts because of how they might “stoke soaring inflation.” And the Bank of England was forced to take drastic measures, including buying an unlimited quantity of government bonds, to protect the U.K. economy from crashing even further. Truss’ premiership never recovered from the loss of credibility.

How Did She Respond to The Crisis?

With pressure mounting and growing disquiet among the wider public and members of her own party, Truss resorted yet again to drastic measures. She sacked Kwarteng unceremoniously on Oct. 14, meaning he had lasted only 38 days on the job.

Jeremy Hunt, a former foreign secretary, stepped in to replace Kwarteng – the fourth chancellor in less than four months. He immediately proceeded to roll back nearly all the measures promised in Kwarteng’s mini-budget. Hunt emphasized that this was necessary to restore confidence in the U.K. economy, but it was also an unmistakable and stunning rebuke of the prime minister. Her absence from Parliament during an “urgent question” on the dismissal of Kwarteng and subsequent ducking out of a planned media event did little to instill confidence in her handling of a political crisis.

The crisis worsened on Oct. 19 with the announcement that the U.K.‘s home secretary had resigned over an apparent security breach. It was followed by chaotic scenes in Parliament in which Conservative politicians were allegedly manhandled and bullied into voting in line with Truss’ wishes. It angered many members of Parliament, and appeared to have sealed the deal of her undoing.

Why Did She Have to Go?

Truss’ loss of credibility and support posed a dilemma for the Conservative Party. It could have tried to stick with Truss, in the hope that there would be enough time for her to recover. After all, the next election could be as far away as January 2025.

Yet the prime minister was so deeply wounded that the party as a whole was suffering and its future electoral chances diminishing. Prior to her resignation, only 10% of voters approved of her leadership, with 80% having an unfavorable view, a significantly worse score than even Boris Johnson when he resigned. Within her own party, a whopping 55% wanted Truss to leave. Meanwhile the Conservatives trail the opposition Labour Party by a dramatic 29 percentage points in the latest polls.

So What Happens Now?

There are several possible candidates to replace her.

These include figures like Rishi Sunak; Leader of the House of Commons Penny Mordaunt; or Jeremy Hunt – all of whom ran against Truss in July. Boris Johnson might even try a daring comeback, although that remains a stretch, considering the circumstances in which he left office.

But whoever is in office will face a steep climb to regain the confidence and support of voters.

This article was updated on October 20, 2022 with the news of Truss’ resignation.

Garret Martin is Senior Professorial Lecturer and Co-Director of the Transatlantic Policy Center at the American University School of International Service.