Facebook scammers residing in Africa kept changing the town name when reposting this real story about a bear being found in a car. 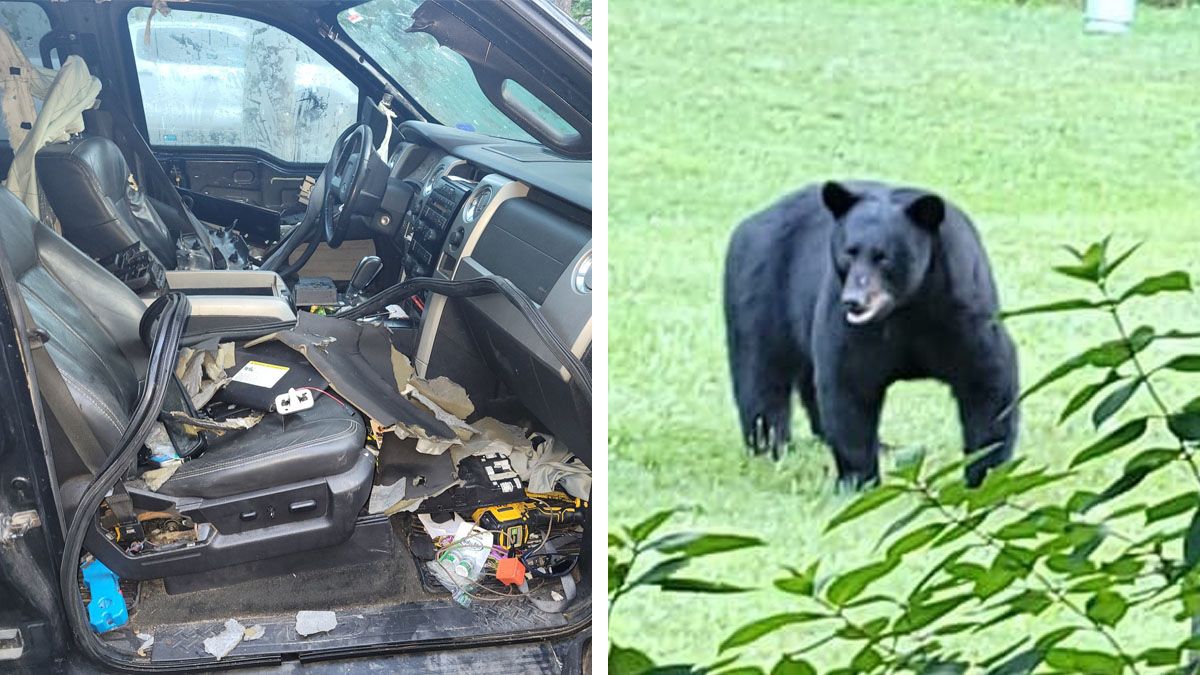 On July 23, 2022, the Blue Ridge Public Safety Facebook page posted, "Officers were dispatched to a vehicle unlock this morning in Hilltop. Once they arrived, they found the vehicle locked with a bear inside. Needless to say, Bear - 1, Vehicle - 0. This is a reminder to keep your vehicle doors locked even if you will be out of it for only a few minutes."

This was a true story that really happened in the Hilltop area of Sapphire, North Carolina, according to a Fox 26 News article that was published two days later. However, we soon found that it was being used in a series of locally-targeted scams.

The post from the officers included four photographs, three of which showed the torn up interior of the automobile and one picture that captured the bear on camera. The vehicle involved was a Ford SUV.

Nearly three months later, on Oct. 16, a Facebook user who claimed to live in Zimbabwe named Blessing Jele posted the same story in a local commerce group named Syracuse Sell Your Stuff. However, this time, the story said that the incident took place in Syracuse, New York, which was not true. A search of Facebook showed that other users with suspect profiles, some which also showed African countries of origin, spent the next several days continuing to repost the same story, except with a different location each time. The posts were made in groups where items could be bought and sold, just like the Syracuse Sell Your Stuff group. The users who reposted the story in these kinds of groups managed accounts that were part of a series of scams.

What made these users suspect in our eyes? For starters, some of the accounts were brand new. Second, they reposted the story with an incorrect town name specifically in groups where items could be bought and sold. Such groups (plus all of Facebook Marketplace) are often a breeding ground for scammers. Third, these same users closed the comments on all of their many posts in what felt like a coordinated act, as could be seen at the bottom of the Syracuse group's screenshot above. Fourth, again, the fact that many of the users were based in Africa, far away from all of the small American towns that they kept posting about.

How the Scam Worked

According to what we found, scammers waited for the posts in the local commerce groups to rack up significant amounts of likes and shares. Again, the comments were turned off, which meant that no discussion could take place that let users notify each other that the whole thing was a scam.

After scammers determined the post had enough likes and shares, they would later edit the post to remove the bear story and pictures, replacing it with a scam link (screenshot) that falsely claimed they received $2,000 for free from GO2bank. We strongly recommend against clicking any suspicious links like these. We also advise that readers always closely safeguard all personal information and financial data.

We saw the same story about the officers finding a bear in a car with many other town names, some of which were for unknown states, including Smithfield, Bonifay, Blaine, Montgomery, Paulding, Atkison, Wheelersburg, Mifflin, Davenport, Avoyelles, Henderson, Ashland City, and Devil's Lake, just to name a few.

In one post made on Imgur.com, the story was said to have taken place in Stephenville, Texas. Commenters appeared to believe the story really did happen in the Texas town, even though it took place in North Carolina.

One commenter in the original Blue Ridge Public Safety post said on Oct. 17, "These photos are being copied and shared across the country along with a changed caption depending on the area the poster lives in. I live in Virginia and my buddy from Oregon sent this to me and it said it occurred in Oregon." It's unclear how many locations were named in reposts.

Another user added, "I’ve seen this post for 20 different towns now." Several users also said they believed scammers were at fault for the reposts, which was true.

Readers: Did you see this same post about officers, the bear, and the vehicle mentioned with your town name? If you did, let us know by dropping a comment in our Facebook post. Also, feel free to share a link to this article to your own Facebook profile to help notify family and friends of this scam.

Bunchesofhoneyoats. “Wonder What the Insurance Had to Say.” Imgur, 18 Oct. 2022, https://imgur.com/gallery/3H1ihhR.

On Oct. 20, 2022, we updated this story with information about how the scam worked.