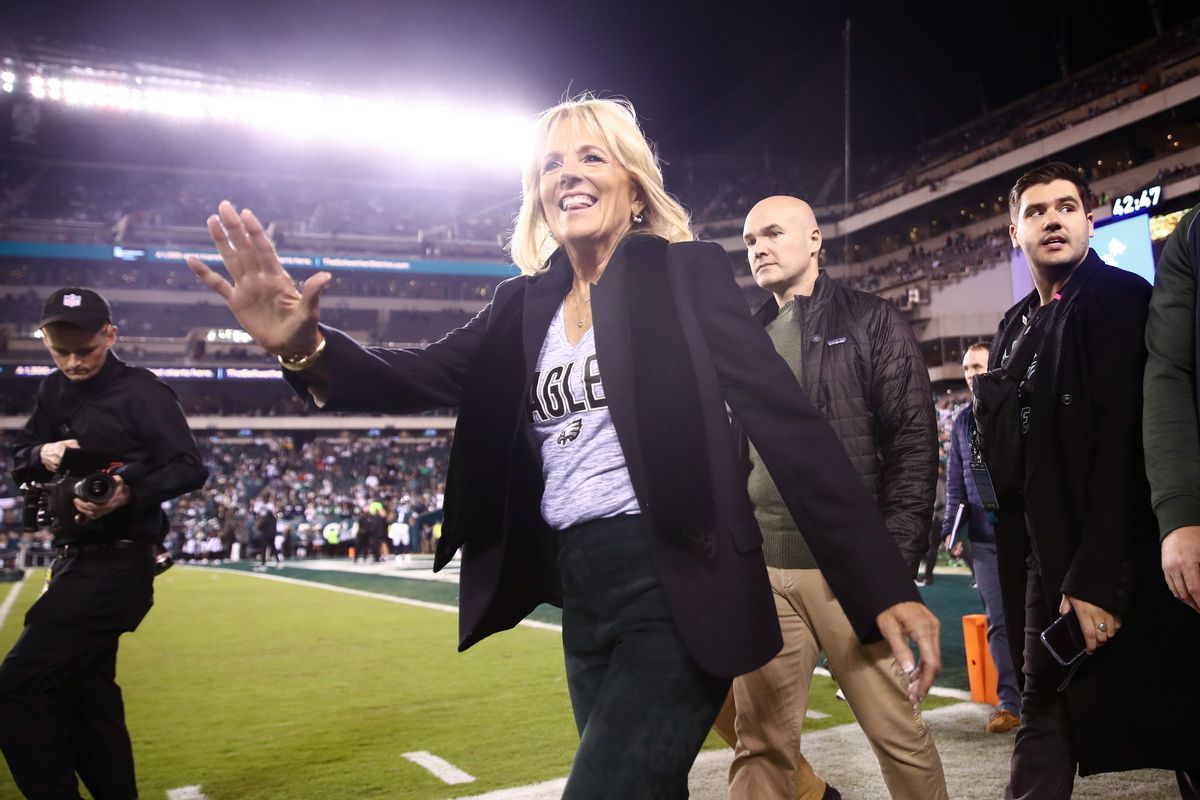 On Oct. 16, 2022, rumors began to spread online that first lady Jill Biden had been booed while attending a Philadelphia Eagles NFL home game. While Biden was born in New Jersey, she grew up an Eagles fan while living in Willow Grove, Pennsylvania. The Eagles went on to beat the Dallas Cowboys on that same evening by a score of 26-17.

According to a widely shared video that featured doctored audio, the crowd at Lincoln Financial Field joined in unison to chant "Fuck Joe Biden." However, again, the audio had been replaced and misled viewers. Meanwhile, a second video that appeared to be legitimate featured some booing, with one woman yelling "Let's Go Brandon" one time.

Since this rumor involved more than one video, one of which contained audio that was knowingly altered by an unknown person, establishing a fact-check rating would be somewhat arbitrary and would not directly inform readers of the full scope of the matter. Instead, we have decided to lay out all the facts, fully sourced with links and a list of citations.

This story may continue to develop with the possibility of more videos emerging. We will update this article should any further evidence come to light.

Why Was Jill Biden at the Game?

According to The Associated Press, the first was there "as part of cancer awareness night." Her husband, U.S. President Joe Biden, did not attend the game, but had previously "urged Americans to come together for a new 'national purpose' — his administration's effort to end cancer 'as we know it.'"

The game was also part of the NFL's Crucial Catch initiative, which carried the slogan, "Intercept Cancer." The first lady tweeted all of these details on her @FLOTUS account on the same evening.

The first of two videos that we examined included audio that appeared to have been misleadingly added from an unrelated clip. Despite including audio that had replaced the original sound, the doctored video was still posted by multiple Twitter accounts and YouTube channels. It was even misleadingly reported as if it was real by Sky News Australia, Russia Today, TheBlaze, and conservative activist Brigitte Gabriel.

Our former colleague Dan Evon, who is now working for the News Literacy Project, provided the truth of the matter. The video with its original audio was first tweeted by the NFL within minutes of the moment occurring on the football field. It showed Biden and cancer survivors singing "Fly, Eagles Fly!" No boos or political chants were audible with the original audio track. After all, again, it depicted the home team's fight song being led by cancer survivors, which was not exactly a moment that someone might expect to hear booing.

So, where did the audio of the "Fuck Joe Biden" chant come from? Our best guess was that the sound was taken from a TikTok video recorded at a 2021 football game hosted by The University of Tennessee. On Sept. 11, 2021, the @oldrowoutdoors TikTok account uploaded a video that appeared to include the exact same audio.

The audio of booing from an unknown source was then likely mixed in with the sound from this TikTok video, which made up the audio track for the doctored video that showed the first lady.

In addition to the video posted by the NFL, a second credible clip of the same moment with Biden and the cancer survivors singing together was also tweeted by an NBC Sports Twitter account.

In a second video, which appeared to be legitimate, some boos could be heard either before or after the rendition of "Fly, Eagles Fly!" A woman in the crowd also said "Let's Go Brandon" one time. These boos occurred with both Biden and cancer survivors being shown on the large jumbotron screens inside the stadium.

A number of Twitter users claimed that Biden was also booed during the coin toss. It was true that the first lady participated in the coin toss. However, we have yet to uncover video of this moment. As previously mentioned, any new evidence will be added to this developing story in the future in an effort to provide our readers with all of the facts.

Miller, Zeke, and Carla K. Johnson. “Biden Hopes Ending Cancer Can Be a ‘National Purpose’ for US.” The Associated Press, 12 Sept. 2022, https://apnews.com/article/biden-health-diagnostic-tests-john-f-kennedy-presidential-library-and-museum-government-politics-6bc8183548cd46545f4141cfa6fe4630.