Since 1913, the number of seats in the House has remained constant even though the nation’s population has more than tripled, writes this political science professor. 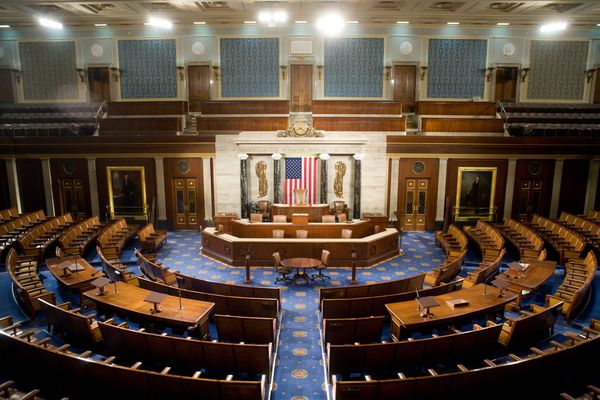 This article by Steven L. Tyler is republished here with permission from The Conversation. This content is shared here because the topic may interest Snopes readers; it does not, however, represent the work of Snopes fact-checkers or editors.

As the population of the U.S. has grown over the past century, the House of Representatives has gotten worse at being representative of the people it serves. That doesn’t have to happen – and it wasn’t always the case.

The House is the one segment of the federal government that was created from the beginning to directly channel the views of the people to Washington, D.C. But over the past century, the ability of any individual members of the House to truly represent their constituents has been diluted.

When the nation was founded, there were 65 members of the House, representing 3.9 million people in 13 states. On average, that’s one House member for every 60,450 people.

This means American democracy is less representative, and not all citizens are politically equal.

Since 1913, the number of House seats has remained constant. But in the early years of the United States, the size of the House grew as the nation expanded. From 1791 to 1913, the House passed laws adding more seats in ways that reflected the admission of new states and the growing population. During the Civil War, when some Southern states seceded, the House actually shrank in size – and then resumed expanding as those states rejoined the Union and others were added.

The number of seats in the House was fixed at 435 by law in 1929. But it is not a constitutional provision. It is a federal law, so it can be repealed or amended just like any other.

Since that time the country’s population has more than tripled.

Any changes would require a new law expanding the House, determining how many seats each state would get and drawing new districts based on U.S. Census Bureau data to achieve relatively equal representation.

It might not be widely popular to send even more politicians to Washington, D.C. A larger House would also cost more to operate: The total cost for the House now averages US$3.4 million per member. But an improvement in democratic representation might be worth the effort.

If the House had kept pace with population growth since 1913, I calculate that there would be 1,560 seats now.

Comparative political analysts have identified a general mathematical principle about the size of a properly representative national legislature, called the “cube root law”: Many legislatures around the world have, by various processes, ended up with a number of seats roughly equal to the cube root of the population they represent. That is the number which, when cubed, or multiplied by itself and itself again, equals the population. That would put the U.S. House size at 692, with each seat representing an average of 478,480 people.

Another way to consider expanding the House would be to use what is known as the “Wyoming Rule.” It ensures the least populated state – currently Wyoming – would receive one House seat and uses its population as the basis for House districts in the other states. Each state’s House delegation would change in size over time, to remain roughly proportional to its population even as the nation grew and its people moved from state to state.

According to the 2020 census, that would mean each House district would represent approximately 577,719 people. There are several technical methods for assigning districts to the states, because no other state’s population is evenly divisible by 577,719. But using a very basic method would produce a House with 571 seats.

California, the most populous state, has roughly 68 times as many people as Wyoming does. Under the current House size, it will have 52 seats in the Congress that begins in 2023. But under a simple version of the Wyoming Rule, it would have 69. This would ensure all U.S. residents have roughly equal representation in the House, and it would better balance the Electoral College, though less populous states would continue to have an advantage because each voter has a larger influence on the two electoral votes from their senators. While the Electoral College will always disproportionately favor states with small populations, the more seats in the House means more electors to distribute, and the more electors there are the more fair the relative voting strength of each state.

Some states would be slightly over- or underrepresented, even under the Wyoming Rule, because state boundaries don’t line up evenly with population locations. But the disparity would be less than under the current 435-seat cap.

And it’s worth noting that this method would not address the fact that 670,000 Americans live in Washington, D.C.; 3.2 million live in Puerto Rico; and about 340,000 live in the other U.S. island territories of Guam, the Commonwealth of the Northern Mariana Islands, American Samoa and the U.S. Virgin Islands. None of them have ever been represented by full voting members of the House.

Steven L. Taylor is Dean of the College of Arts & Sciences and Professor of Political Science at Troy University.