According to this defense strategist, Vladimir Putin is merely expanding that approach. This article by Benjamin Jensen is republished here with permission from The Conversation. This content is shared here because the topic may interest Snopes readers; it does not, however, represent the work of Snopes fact-checkers or editors.

In response to massive battlefield setbacks, Russia has increased its attacks in Ukraine on everything from power plants and dams to railways, pipelines and ports.

As a defense strategist with close to 20 years of military experience, I believe the world should brace for additional strikes as Moscow seeks ways to reestablish an upper hand in the conflict and make up for its declining battlefield position.

Consistent with the Russian military concept of the “initial period of war” – the belief that keys to winning a conflict are actions from the outset that support mobilization and undermine the adversary – the attacks on infrastructure started before the first shot was fired.

In January 2022, a month before the invasion of Ukraine, a critical undersea cable connecting satellite ground stations in Svalbard, Norway, and the Norwegian mainland was mysteriously cut, with most speculating that Russia was to blame. By targeting this cable while Russia deployed more than 100,000 troops to Ukraine’s border, Moscow was signaling the risk of escalation should NATO get involved in the conflict.

These operations select targets primarily for their psychological effect. The belief is that hitting key infrastructure and creating prolonged blackouts, alongside disruptions to the ability to travel and transport goods, make political leaders and the population less willing to resist an attacking force.

According to Valeriy Aleksandrovich Kiselev, a retired colonel and professor at the Combined Arms Academy of the Armed Forces of the Russian Federation, modern wars should focus on destroying an enemies’ critical economic infrastructure without employing large concentrations of ground troops.

This concept nests with the Russian approach to coercive strategy – an alternative to traditional warfare that attempts to manipulate the behavior of an opposing force through political, economic and military pressure. The logic is simple: Why fight a protracted conflict when you can use a mix of fear and punishment to get the enemy to surrender?

When this coercive campaign failed in Ukraine, Russia invaded and made seizing nuclear facilities a key part of its ground campaign, using them both as blackmail and an operational shield to protect troop concentrations. In March, Russia moved to seize multiple nuclear power plants across Ukraine. Fighting continues outside the largest of these facilities, in Zaporizhzhia.

After its initial war plan – which relied on rapid troop movement to seize key terrain – was overcome by stubborn Ukrainian resistance and Western support, Russia increased its attacks against transportation infrastructure in an unsuccessful bid to limit Kyiv’s ability to resupply its front-line formations.

In April, Russia launched a series of attacks against railways across central and western Ukraine. In the summer, Russia attacked a major rail hub on Ukrainian Independence Day, killing multiple civilians.

While military campaigns historically target transportation infrastructure, Russia went further. In response to the ongoing counteroffensive – which has seen Ukrainian forces retake formerly Russian occupied land in the east and south of the country – coercive measures by Russia have escalated to include targeting major dams. In mid-September, Russia tried to destroy the dam outside of Kryvyi Rih, a city of half a million people. The city narrowly averted disaster despite two salvos of cruise missiles, which caused severe flooding but didn’t produce a large enough hole to destroy the dam. Later in the month, Russia targeted a dam on the Siverskyi Donets River.

Many believe that the attacks on infrastructure are now spreading beyond Ukraine.

Russia is strongly suspected to be behind the sabotage of an undersea gas pipeline in October, leading to an environmental disaster in the Baltic and further squeezing European energy markets ahead of winter.

Meanwhile, an investigation has been launched into an act of sabotage that took down large segments of the German rail network on Oct. 8, 2022. The “targeted and malicious action,” as Germany’s transport minister described it, came after NATO and the EU warned nations to protect critical infrastructure amid tensions in Europe.

These attacks could be harbingers of the next stage of the Ukrainian conflict. As seen in the horrific attacks against 10 Ukrainian cities on Oct. 10, a mix of fear, honor and interest will drive Russia to continue striking infrastructure as part of its larger coercive strategy. 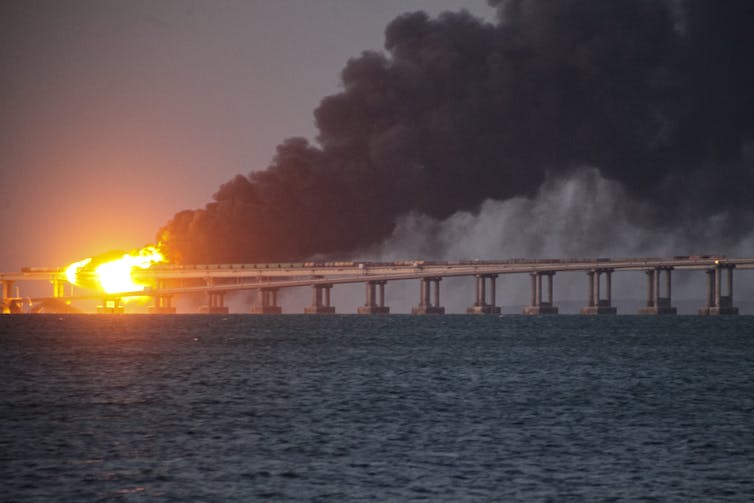 The targeting on Ukrainian infrastructure has intensified following an attack on a bridge connecting Russia with Crimea. AP Photo

While Vladimir Putin stated the strikes were in response to the attack on the Crimea bridge, the targets indicate Moscow may be trying to break Kyiv’s power generation and distribution capacity ahead of winter. With gas prices high, nuclear plants under threat and pipelines disrupted, Russia is betting it can use a cold winter to gain a new bargaining advantage.

If the sabotage attacks in Germany and on the Nord Stream pipelines are linked to Russia, as most suspect they are, Moscow is clearly signaling that countries supporting Ukraine are not safe from future infrastructure attacks. By using covert action and sabotage targeting infrastructure to complement Moscow’s documented use of energy exports as a coercive lever, Putin is likely reminding the world of his reach without publicly acknowledging his role in ordering attacks.

Benjamin Jensen is a Professor of Strategic Studies at Marine Corps University and Scholar-in-Residence at American University School of International Service.