Scholar: As Russia Enlists Hundreds of Thousands of Men to Fight Ukraine, Public Support for Putin is Falling

Arik Burakovsky, a scholar of Russia and public opinion, says public approval of the president and the assault on Ukraine is shifting. 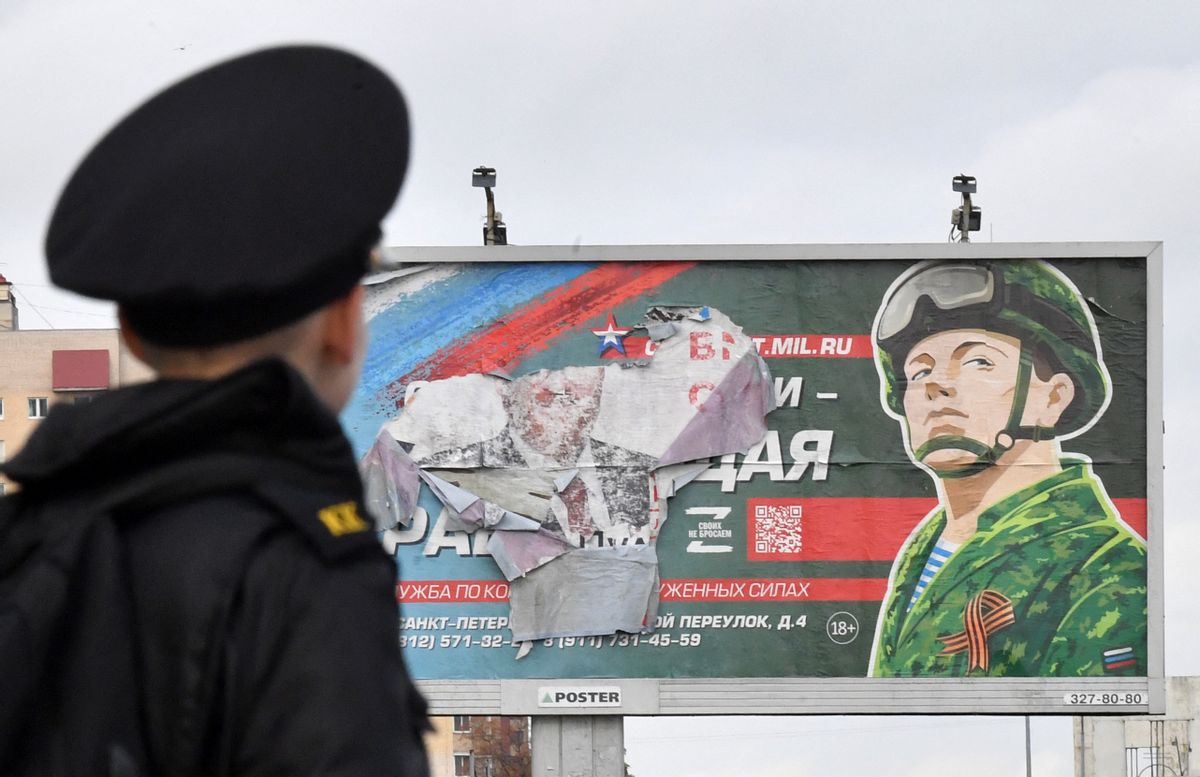 This article by Arik Burakovsky is republished here with permission from The Conversation. This content is shared here because the topic may interest Snopes readers; it does not, however, represent the work of Snopes fact-checkers or editors.

Even as Russia intensifies its attacks on Ukraine, its military appears to be suffering setbacks – from mounting casualties to dwindling military supplies.

But even before those attacks rained down on Ukraine, Russian President Vladimir Putin addressed his insufficient military strength and authorized a partial draft on Sept. 21, 2022 of 300,000 men to help Russia sustain what many experts consider an illegal offensive. So far, Russia reports that an estimated 200,000 new fighters have been drafted into the military.

The draft has triggered a new wave of discontent across Russia. Hundreds of thousands of Russians have fled the country. There have also been multiple violent attacks on Russian military recruitment centers.

The Kremlin has worked to subdue anti-mobilization protests and has arrested more than 2,400 demonstrators.

Meanwhile, public opinion polls by the Levada Center, Russia’s leading independent polling group, continue to show that Russians overwhelmingly support Putin and the “special military operation,” as he has called the war.

But as a scholar of Russia and public opinion, I think that public approval of the president and the assault on Ukraine is nevertheless shifting in light of the mobilization, as more families are torn apart by the hostilities. 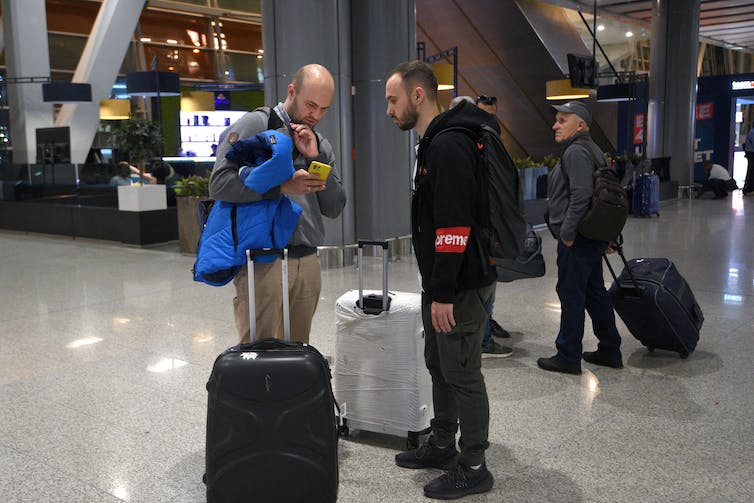 Russians arrive at an airport in Yerevan, Armenia on Sept. 21, 2022, the same day Russia announced a partial draft. Karen Minasyan/AFP via Getty Images

Most Russians Still Support the War

Since the Ukraine invasion was launched in February 2022, Russians largely have been either sympathetic or apathetic toward the war. The public swiftly united behind Putin, and the war gradually became a backdrop to everyday life in Russia.

Nearly 50% of Russians polled have consistently said they “definitely” support Russia’s military actions in Ukraine, another roughly 30% “rather” support them, and only 20% do not support them.

The population has mostly accepted the war based on an unwritten social contract with the Kremlin, in which people obey the regime in exchange for better living standards and a lack of interference in their private lives. Russians generally feel more comfortable subscribing to prevailing narratives about the war espoused by Russian state media than grappling with negative information and difficult news stories.

When Russia annexed four eastern and southern Ukrainian regions on Sept. 30, 2022, Putin spoke publicly about what he called Russia’s Western enemies. He blamed them for propping up the “Kyiv regime” and staging “inhumane terrorist attacks” in Ukraine’s contested Donbas region. In doing so, Putin sought to justify the war’s resulting hardship by arguing that Russians are fighting for their survival.

Russians still overwhelmingly believe that the West is hostile to Russia and that the war is defensive. In August 2022, 71% of people surveyed said they hold negative attitudes toward the United States, and 66% reported having negative views toward Ukraine.

Some sociologists contend that polls in Russia may not be fully reliable due to a range of factors, including leading questions, incorrect wording, widespread indifference, and wariness about criticizing Putin and the government.

Other experts argue that surveys reveal mainly what people are willing to tell pollsters, not necessarily what they truly think.

But new polls indicate an emerging shift in public attitudes. By breaking the impression of normalcy, the draft may be pushing more Russians out of their psychological comfort zone.

The percentage of Russians who say they intently monitor the situation in Ukraine slowly declined after March 2022. But this trend recently reversed, and the proportion of Russians reporting they “very closely” follow the war rose from 21% in August 2022 to 32% in September 2022.

The most common emotions evoked by the war are no longer national pride but rather “anxiety, fear, horror” and “anger, indignation,” people say in the latest polls.

Shaking Trust in the Military

Russians traditionally have considerable confidence in their army.

A survey in December 2021 demonstrated that Russians trusted the military more than any other state institution or official, including the president.

Russian law requires all men aged 18 to 27 to serve in the military for one year. A poll in July 2021 showed that 61% of Russians felt that “every real man should serve in the army.” Women chose this response more often than men, and the elderly chose this option twice as much as those of military age.

However, the war seems to have made Russians more reluctant to to serve in the army. Although the military typically meets its conscription targets, Russia did not meet its goals in a previous campaign to recruit more soldiers from April 1, 2022 to July 15, 2022. In that effort, the Russian Ministry of Defense sought to bring in 134,500 soldiers but only enlisted about 89,000.

The Russian military is now facing more criticism – even from its supporters – because of its recent battlefield failures. There is currently heightened concern among Russian elites about how the military is mismanaging the draft and Russian troops retreating from territories they previously occupied. 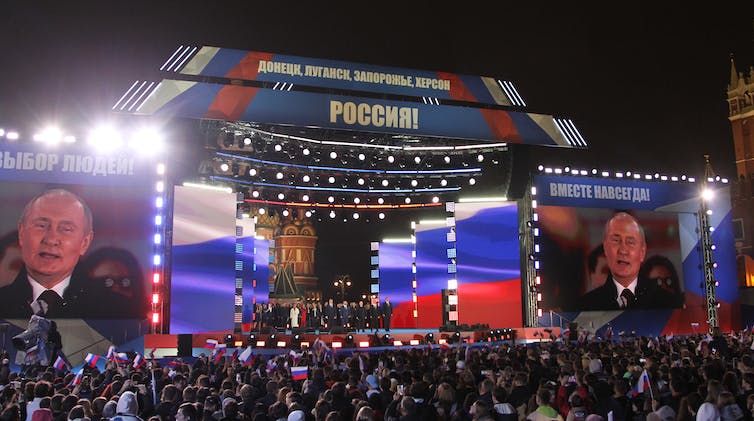 The Future of Putin’s Public Approval

Authoritarian leaders like Putin need to keep up the appearance of popularity to maintain unanimity and social consensus. It is difficult to predict whether Putin’s public support will remain strong enough for him to remain in power.

Putin’s approval ratings dropped from 83% in August 2022 to 77% in September 2022. Most Russians continue to believe the country is moving in the right direction, but public sentiment may change as more people are mobilized into the army.

Putin has outlived many predictions about his fall from power before, and the public may ultimately come to accept the mobilization.

Yet the regime becomes more fragile as public support declines. Resentment toward the Kremlin may increase as more young men, who previously showed little interest in the war, worry about being sent to fight.

Most Russians expect the war to last at least another six months, but it is unclear how much patience they will have as the bloodshed goes on, without a clear resolution in sight.

Arik Burakovsky is the Assistant Director of the Russia and Eurasia Program at The Fletcher School of Law and Diplomacy at Tufts University.