Scholar: Headcovers Have Always Been Political in Iran

Acts of defiance, big and small, have continued uninterrupted across multiple generations, writes this professor. 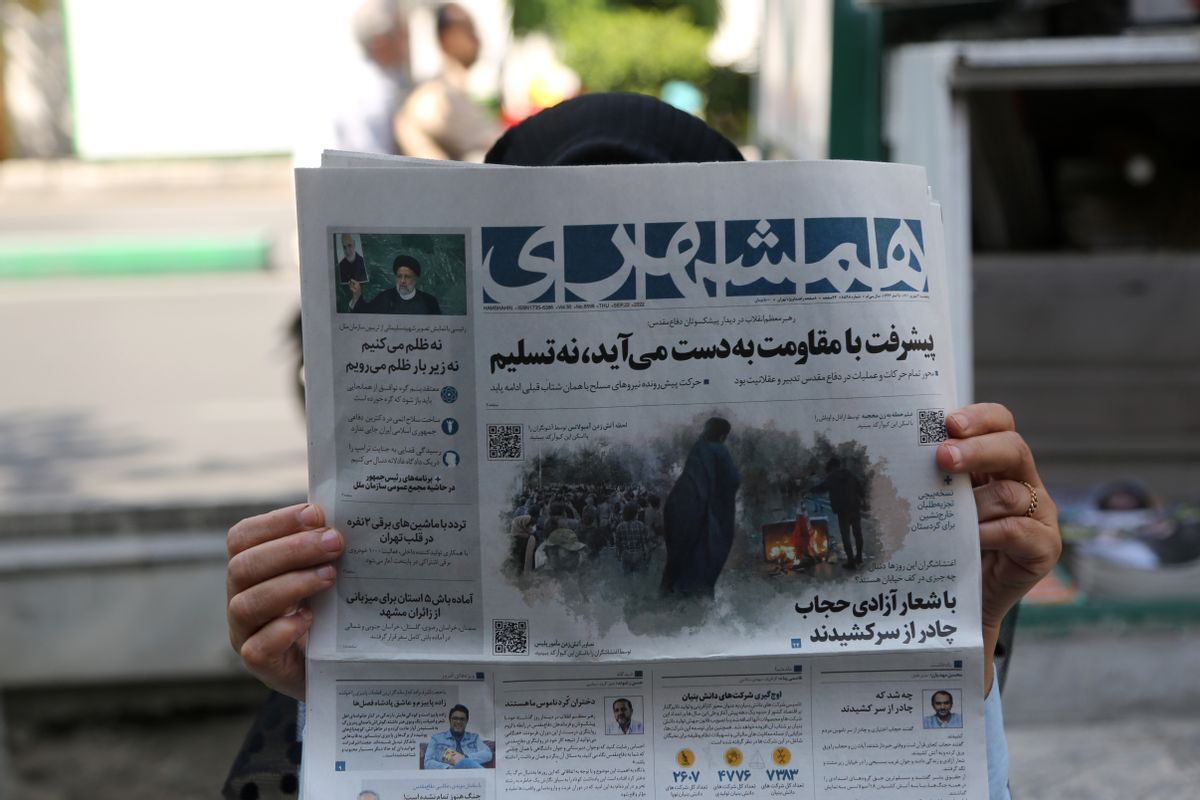 Headcovers have always been political in Iran – for women on all sides. (Image Via The Conversation)

This article by Eliz Sanasarian is republished here with permission from The Conversation. This content is shared here because the topic may interest Snopes readers; it does not, however, represent the work of Snopes fact-checkers or editors.

A friend and I were strolling through Tehran’s streets one afternoon when she was approached by a member of the “morality police,” an agency tasked with enforcing modesty laws in public. First, the policewoman warned her to cover her hair by pulling forward her scarf. Next, she was ordered to remove her sunglasses.

“What do you have there?” the policewoman asked loudly, examining my friend’s green eyes for makeup. There was none, but her stare was full of hate. “Behave yourself!” the policewoman warned.

As we walked away, my friend stopped, turned and looked back at her, pulling the scarf back again while putting her sunglasses back on. Her husband lamented, “Woman, one of these days you will be arrested, and if lucky you will be alive when I come to pick you up from the police station.”

This was 30 years ago. Similar scenes still play out daily. Since mid-September 2022, when a young woman named Mahsa Amiri died in detention after being detained for not wearing her headscarf “properly,” protests against the morality police and the broader regime have erupted across the country and from sympathizers around the world.

Acts of defiance, big and small, have continued uninterrupted across multiple generations. Women’s activism has been constant, as has their imprisonment.

Role of the State

In Persian culture, the main variation of the veil has historically been the chador, a long cloak covering the body from head to toe, which the wearer holds closed in front of her.

Early women’s groups did not push back against it. Instead, they focused mainly on raising the marriage age, granting more rights to women in cases of divorce and custody and allowing girls to attend school. During the 1920s, some began to address the veil, as I wrote about in my book on the women’s rights movement.

This was a risky move. For example, when a woman’s magazine in the city of Mashhad published an editorial in favor of unveiling and equal rights, the editor’s house was looted and she had to flee, though she continued her work in other cities. 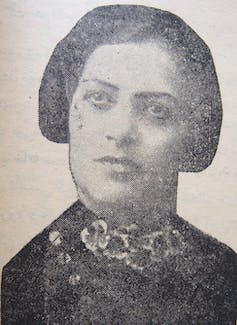 Around the same time, in the city of Isfahan, another publication owned by a feminist who advocated unveiling barely escaped a mob attack. The journalist, Sediqeh Dowlatabadi, left instructions that no veiled woman should be allowed to participate in her burial or visit her grave.

The founder of the Pahlavi Dynasty, Reza Shah, banned the veil in 1936 as part of his modernization program. By most accounts, this edict left an overwhelming majority of women, who had been veiled most of their lives, in a state of shock and isolation. Many did not leave their houses until the state allowed the wearing of hats and scarves.

When Reza Shah was forced to abdicate in favor of his son Mohammad Reza Shah in 1941, the prohibition was disbanded and headcovers returned in full force. During his reign the veil became optional in public. 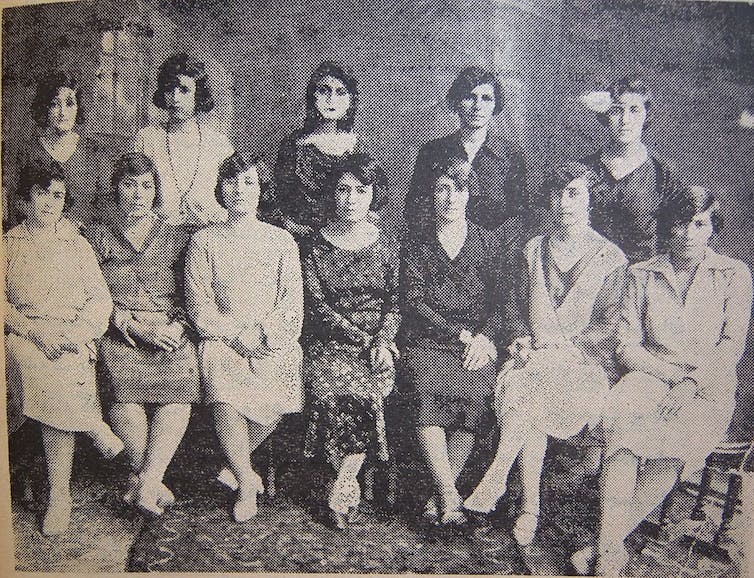 The Board of directors of Jam'iyat-e Nesvan-e Vatankhah, or Society of Patriotic Women, a women’s right association in Tehran in the 1920s and 1930s. Wikimedia Commons

Yet the psychological and cultural aspects were rarely discussed or debated. I recall schoolmates of mine who were unveiled in school, but when our bus reached their neighborhood, they covered their heads before disembarking. Duality was the name of the game.

Role of the Revolution

With the fall of monarchy in 1979 and the subsequent rise of the Islamist government, the headcover issue returned with a vengeance.

At this stage not only were many women wearing chadors, but a second variation of headcover emerged: an often but not always black veil that fit the head closely and a coatlike covering that loosely covered the body. During the past few decades, however, women have been allowed to wear a scarf instead.

The first demonstrations against the new rules were held in 1979 when authorities declared that female government employees must wear the hijab and lasted five days. The compulsory hijab went into effect in June 1980, sparking demonstrations by women dressed in black attire as a symbol for their loss of freedom. All women’s demonstrations were met with violence.

There were many women – often referred to as traditional, religious or pro-regime – who favored forced veiling, as there are today. Yet, it is never easy in Iran to speak of positions along simple party lines. There were practicing Muslim women who were veiled but opposed forced veiling. On the other hand, there were men and women on the left who did not see a problem with forced headcovers, arguing there were more important issues to be addressed.

During the early days of the revolution, female members of recognized religious minorities such as Zoroastrians and ethnic Christian groups opposed the forced headcover as well. They argued that the government’s order went against the constitution, which permitted every community to adhere to its own traditions. A small group of women wore their traditional historical attire in public, as a substitute, but were ordered to stop.

By 1985, all minority school girls were ordered to wear the Islamic headcover and full body attire. Teachers instructed mothers to cover their daughters’ heads while testing them on spelling and dictation at home, in order for the children to get used to hearing muffled words through the headcover.

The critical significance of the hijab in the state’s eyes was best expressed by the first supreme leader, Ayatollah Ruhollah Khomeini: “if the Islamic Revolution had no other outcome but the veiling of women, this in and of itself is enough for the Revolution.” 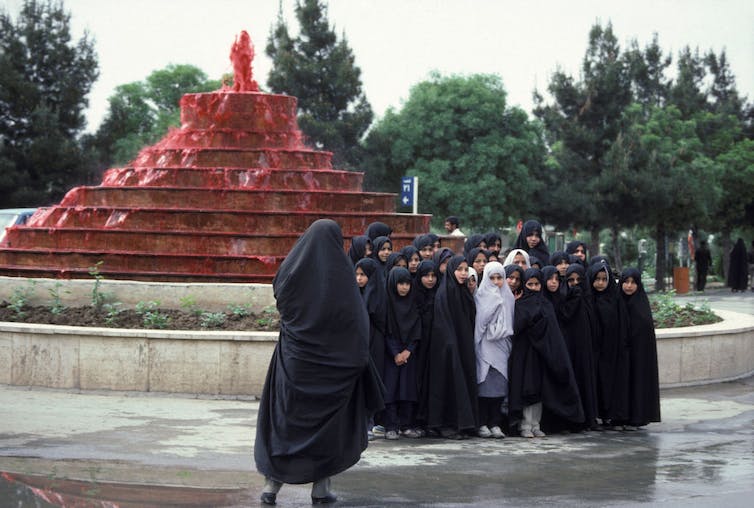 Veiled girls in Tehran in 1986. Eslami Rad/Gamma-Rapho via Getty Images

Women in Iran have never been passive. To the contrary, they have put the regime on the defensive whenever possible by employing their own logic and interpretations of Islam. The state elite have been pontificating on gender for more than 40 years, and women’s rights activism has been just as constant.

What the authorities did not seem to realize was that their own comments and actions sparked women’s consciousness. Every time they compared Muslim women with Western women, arguing that women have been oppressed in the West but not in Islam, they raised awareness. And every time authorities admitted that oppression of women was ongoing in Iranian society, they raised demands. At one point, pro-regime women protested against lax dress codes for men, and authorities were forced to admit that they too must observe modest dress codes and behavior.

The last 10 years have brought two extremely important developments. First is the sharp rise in education levels among women and girls. Today, the majority of university students are women. Yet their participation in the labor force is only 17%, and according to the Global Gender Gap report, Iran ranks 143rd out of 146 countries for gender equality and economic participation. With education comes rising expectations; unfulfilled expectations foment deep frustration and anger.

Second is the role of the internet and social media. Research shows that in the age of leaderless movements, they are powerful tools for mobilization. The problem is that governments also have access to these tools – and strong security forces.

These transformational forces are powerful instigators of discontent and go far beyond a headcover issue. Today’s protests began with the hijab but have expanded to include economic frustrations, desire for freedom, the environment and other issues.

In the past, major demonstrations were crushed, including the 2009 uprising when protesters claimed incumbent president Mahmud Ahmadinejad had stolen the election. But regardless of how the current protests turn out, they underscore that the headcover issue is not going away – and has the potential to amplify anti-regime sentiments in Iran and abroad.

Eliz Sanasarian is a Professor of Political Science and Gender and Sexuality Studies at USC Dornsife College of Letters, Arts and Sciences.