Hurricane Ian: When the Power Grid Goes Out, Could Solar and Batteries Power Your Home?

A study of real-world disasters shows home solar and storage could keep the lights on and the air conditioner running during many outages, but not all. 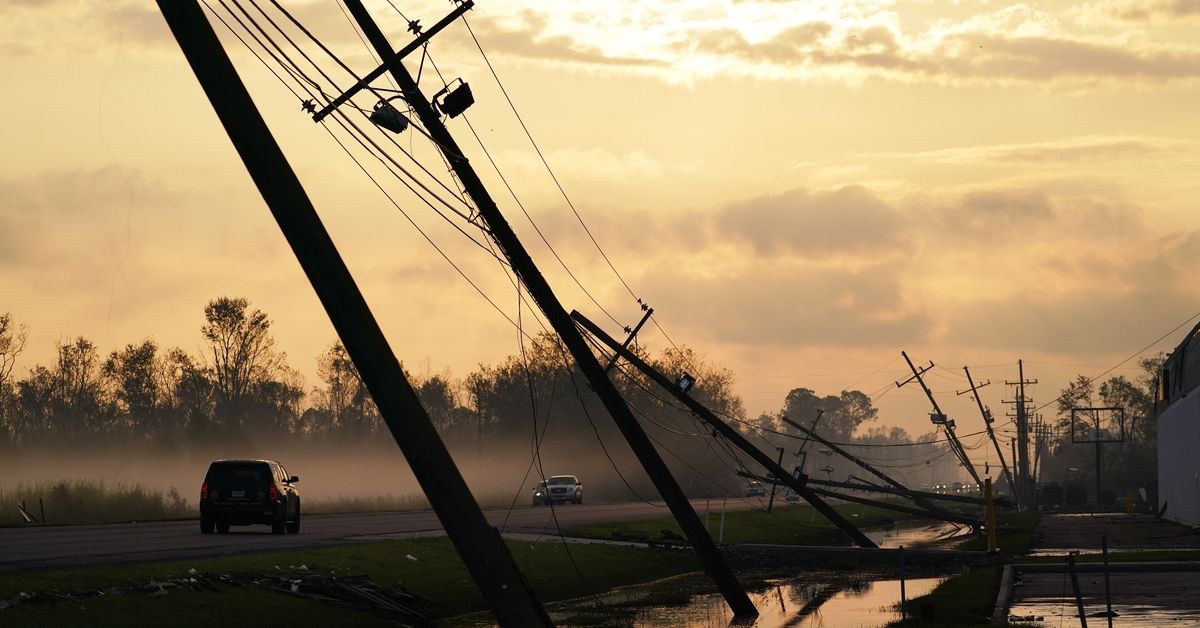 This article by Will Gorman, Bentham Paulos and Galen Barbose is republished here with permission from The Conversation. This content is shared here because the topic may interest Snopes readers; it does not, however, represent the work of Snopes fact-checkers or editors.

Hurricane Ian’s catastrophic winds and flooding are likely to bring long-lasting power outages to large parts of Florida. The storm is the latest in a line of hurricanes and extreme heat and cold events that have knocked out power to millions of Americans in recent years for days at a time.

In many disaster- and outage-prone areas, people are starting to ask whether investing in rooftop solar and battery storage systems can keep the lights on and the air conditioner running when the power grid can’t.

When the grid goes down, most solar systems that lack a battery will also shut down. But with batteries, a home can disconnect from the grid. Each day, the sun powers the home and charges up the batteries, which provide power through the night.

Our team at Berkeley Lab explored what it would take for homes and commercial buildings to ride out long power outages, of three days or more, with solar and batteries.

How Much Can Solar + Storage Do?

For a new report, we modeled a generic power outage for every county in the U.S., testing whether a rooftop solar system combined with a 10- or 30-kilowatt-hour battery could power critical loads, like refrigeration, lighting, internet service and well pumps; if it could go further and also power heating and air conditioning; or if it could even power a whole home.

To put that into perspective, the most popular battery on the market, the Tesla Powerwall, has just over 13 kWh of storage.

In general, we found that even a modest system of solar plus one battery can power critical loads in a home for days at a time, practically anywhere in the country.

But our maps show that providing backup for cooling and heat can be a challenge, though not an insurmountable one. Homes in the Southeast and Pacific Northwest often have power-hogging electric resistance heaters, exceeding the capability of solar and storage during winter outages. Homes with efficient heat pumps performed better. Summer air conditioning load can be heavy in the Southwest, making it harder to meet all cooling needs with solar and storage in a summer blackout.

Larger solar and battery systems can help, but meeting demand during outages still depends on the weather, how energy efficient the home is and other factors. For example, simple thermostat adjustments during power outages reduce heating and cooling needs and allow solar with storage to maintain backup power over longer periods. 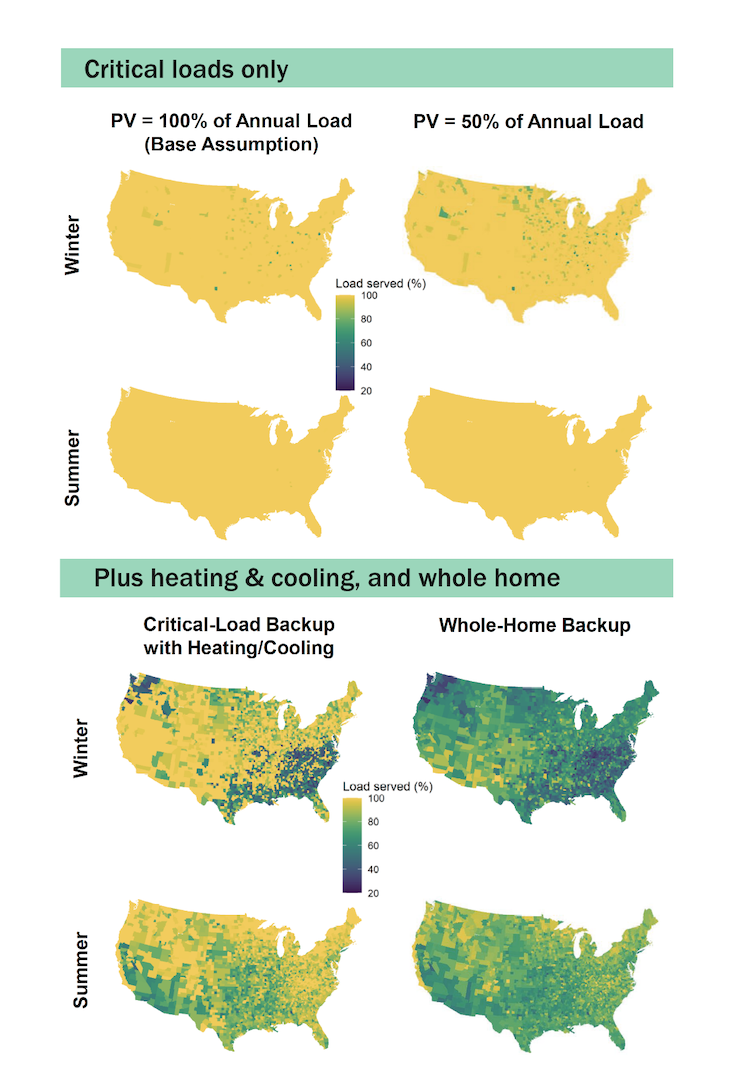 Where solar and storage with a 10-kWh battery can supply backup power, in various scenarios. Berkeley Lab, CC BY

The ability to power commercial buildings varies widely, depending on the building type. Schools and big-box retail stores, with sufficient roof space for solar relative to building power demand, fare much better than multistory, energy-intensive buildings like hospitals.

How Solar Would Have Handled 10 Past Disasters

We also looked at 10 real-world outage events from 2017 to 2020, including hurricanes, wildfires and storms, and modeled building performance for specific locations and real weather patterns during and after the outages.

We found that in seven of the outages, most homes would have been able to maintain critical loads plus heating and cooling using solar with 30 kWh of storage, or just over two Powerwalls.

But the weather around the outage can have a big impact, especially for hurricanes. After Hurricane Florence knocked out power in North Carolina in 2018, cloudy skies hung around for three days, dimming or even stopping solar panels’ output.

Hurricane Harvey, on the other hand, slammed the Texas coast in August 2017 but moved on to cause widespread damage elsewhere in Texas. The skies over Corpus Christi cleared even as it took a week or more to get power restored. Solar and storage would have been a big help in that case, providing virtually all power needs for a typical single-family home, once the skies cleared.

How a typical home would have done with solar and 30 kWh of storage after hurricanes Florence and Harvey. The light blue line shows the short periods of ‘unserved load,’ or shortfalls in meeting power demand, right after the storms. The state of charge shows batteries were able stretch solar power through the night. Berkeley Labs, CC BY

Similarly, we found solar can do well in less cloudy events, like wildfire prevention shutoffs in California, or after the 2020 derecho windstorm in Iowa.

The heat source in a home is also a key factor. In a five-to-10-day outage following an ice storm in Oklahoma in 2020, we found that solar plus a 30-kWh battery could have supplied nearly all the critical power and heat needed for homes with natural gas heaters or heat pumps. But homes with electric resistance heating would have fallen short.

Setting up solar and storage to provide backup power in a home or building takes extra work and it costs more – just one Powerwall can run from US$12,000 to $16,500 for a full system installation, before incentives and taxes. That’s as much as a fair-sized solar system. Nevertheless, a growing number of homeowners are installing both.

Over 90% of new solar installations in Hawaii in 2021 were paired with batteries after a regulation change. Now these distributed power plants are helping power the grid as coal plants are retired.

California has over 1.5 million rooftop solar systems. A growing number of customers are retrofitting batteries on their systems, or adding new solar plus storage, in part because utilities have resorted to “public safety power shutoffs” to lower the risk of wildfires sparked by power lines during dry, windy days.

And new forms of backup power are emerging, especially from electric cars. Ford is partnering with SunRun to combine its new F150 Lightning electric pickup truck with solar and a two-way charger that can use the truck’s battery to power a house. The standard version of the truck comes with a 98-kWh battery, the equivalent of more than seven Tesla Powerwall stationary batteries.

A fire station in Puerto Rico offers a glimpse of what solar and storage can do. After Hurricane Maria cut power for months in 2017, over 40,000 solar systems were installed on the island, often paired with battery storage. One of those is at the fire station in the town of Guánica, which had been unable to receive emergency calls in previous outages.

When Hurricane Fiona’s wind and flooding again knocked out power to most of Puerto Rico in September 2022, the fire station was still operating.

“The solar system is working beautifully!” Sgt. Luis Saez told Canary Media the day after Fiona knocked out power. “We did not lose power all throughout the hurricane.”

Will Gorman, Bentham Paulos and Galen Barbose are researchers at the Lawrence Berkeley National Laboratory.