Photos From Space: The Seconds Before NASA's Spacecraft Crashed Into an Asteroid

Here's what happened in the seconds before the collision — a first of its kind. 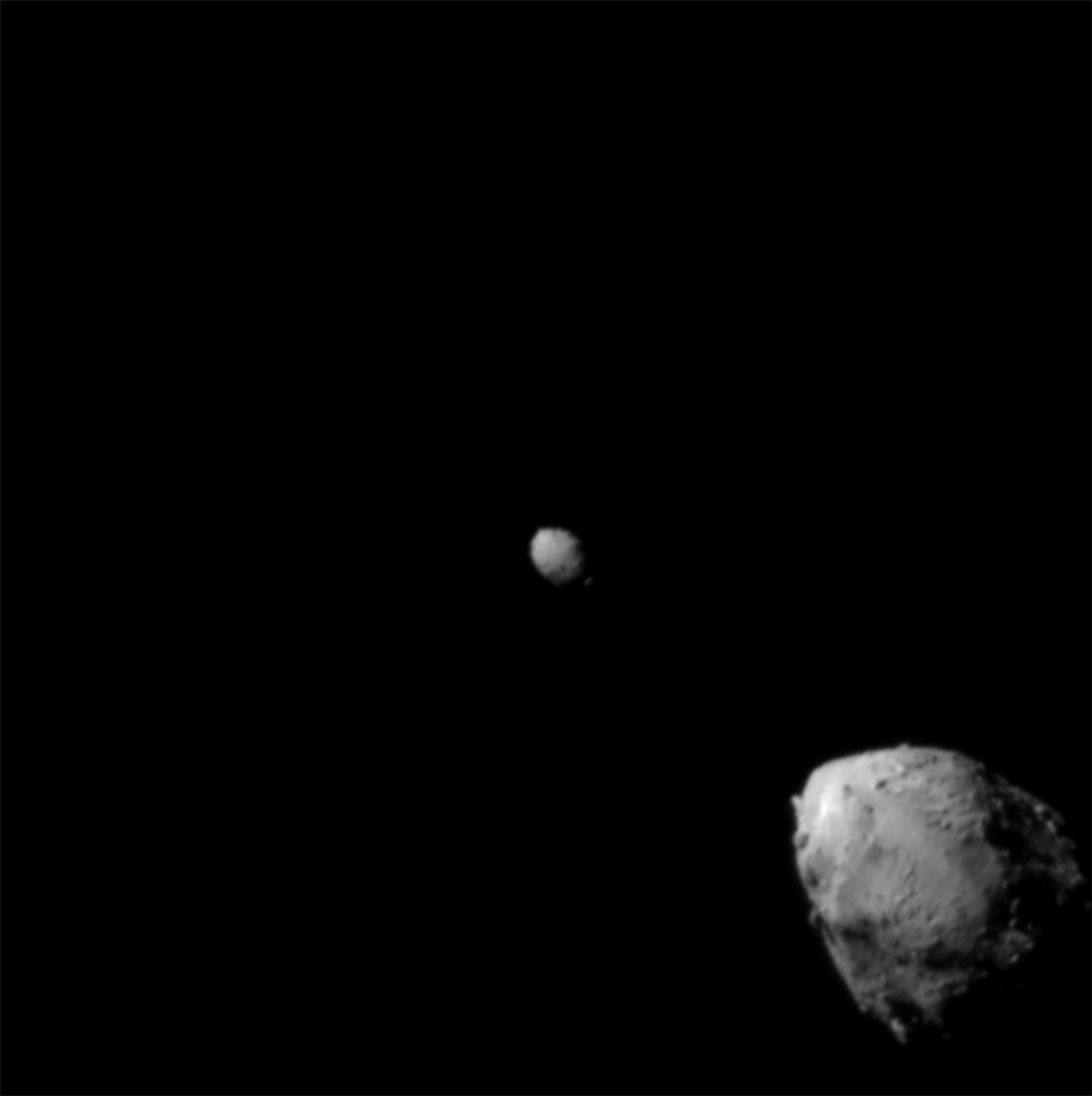 This article by David Barnhart is republished here with permission from The Conversation. This content is shared here because the topic may interest Snopes readers; it does not, however, represent the work of Snopes fact-checkers or editors.

In a world first, NASA has crashed a spacecraft into an asteroid in an attempt to push the rocky traveler off its trajectory. The Double Asteroid Redirection Test – or DART – is meant to test one potential approach that could prevent an asteroid from colliding with Earth. David Barnhart is a professor of astronautics at the University of Southern California and director of the Space Engineering Research Center there. He watched NASA’s live stream of the successful mission and explains what is known so far.

1. What Do the Images Show?

The first images, taken by a camera aboard DART, show the double asteroid system of Didymos – about 2,500 feet (780 meters) in diameter – being orbited by the smaller asteroid Dimorphos that is about 525 feet (160 meters) long. 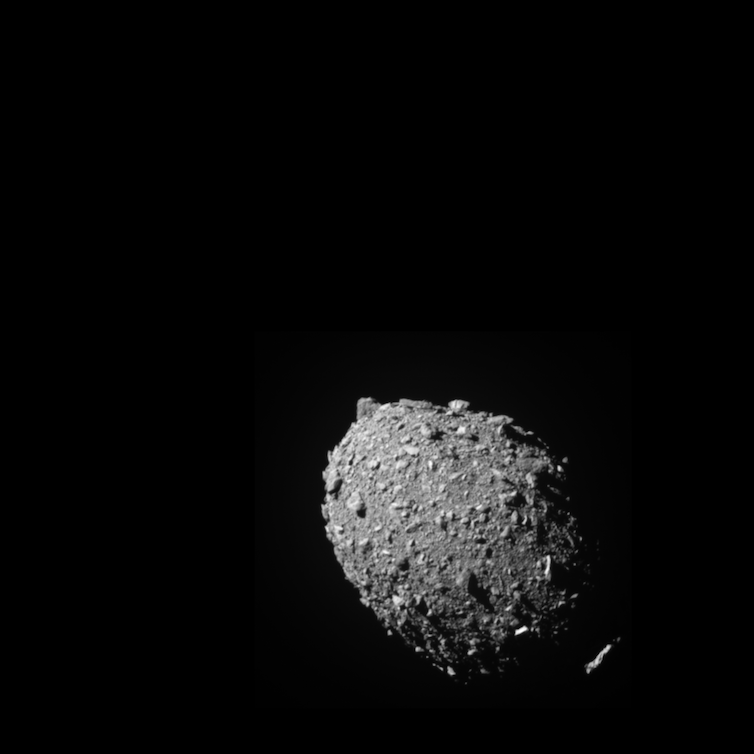 This image of the moonlet Dimorphos was taken 11 seconds before the DART spacecraft crashed into the asteroid. NASA/Johns Hopkins APL

As the targeting algorithm on DART locked onto Dimorphos, the craft adjusted its flight and began heading towards the smaller of the two asteroids. The image taken at 11 seconds before impact and 42 miles (68 kilometers) from Dimorphos shows the asteroid centered in the camera’s field of view. This meant that the targeting algorithm was fairly accurate and the craft would collide right at the center of Dimorphos. 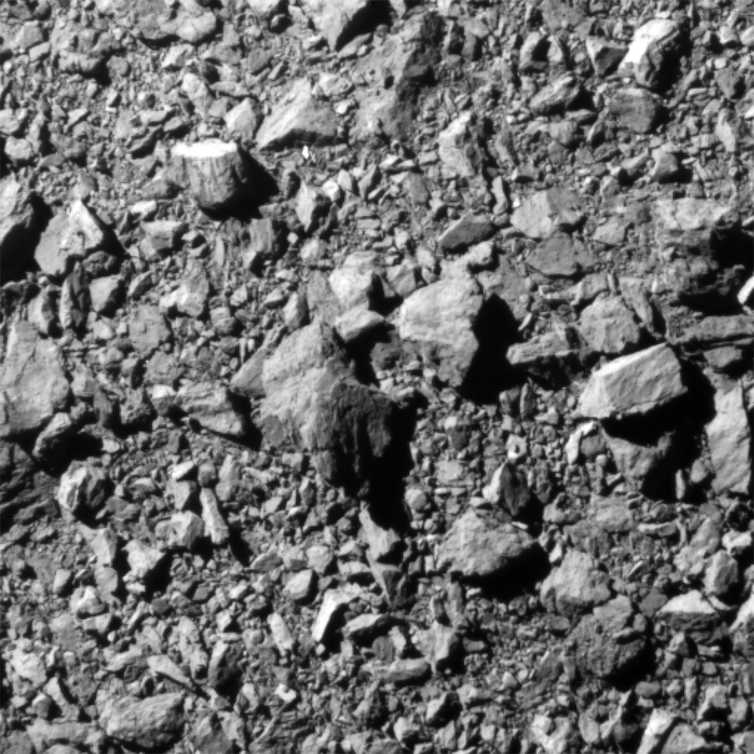 \This photo shows the textured and rock-strewn surface of Dimorphos and was taken two seconds before DART crashed into the surface. NASA/Johns Hopkins APL

The second-to-last image, taken two seconds before impact shows the rocky surface of Dimorphos, including small shadows. These shadows are interesting because they suggest that the camera aboard the DART spacecraft was seeing Dimorphos directly on but the Sun was at an angle relative to the camera. They imply the DART spacecraft was centered on its trajectory to impact Dimorphos at the moment, but it’s also possible the asteroid was slowly rotating relative to the camera. 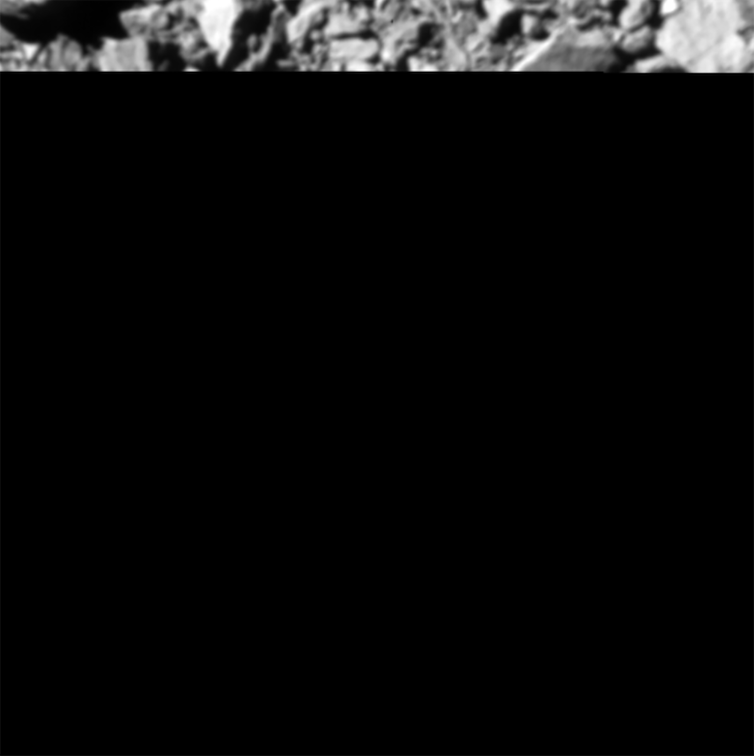 The final image from DART, taken one second before impact, was not able to fully transmit back to Earth. NASA/Johns Hopkins APL

The final photo, taken one second before impact, only shows the top slice of an image but this is incredibly exciting. The fact that NASA received only a part of the image implies that the shutter took the picture but DART, traveling at around 14,000 miles per hour (22,500 kilometers per hour) was unable to transmit the complete image before impact.

2. What Was Supposed to Happen?

The point of the DART mission was to test whether it is possible to deflect an asteroid with a kinetic impact – by crashing something into it. NASA used the analogy of a golf cart hitting the side of an Egyptian pyramid to convey the relative difference in size between tiny DART and Dimorphos, the smaller of the two asteroids. Prior to the test, Dimorphos orbited Didymos in roughly 16 hours. NASA expects the impact to shorten Dimorphos’ orbit by about 1%, or roughly 10 minutes. Though small, if done far enough away from Earth, a nudge like this could potentially deflect a future asteroid headed towards Earth just enough to prevent an impact.

3. What Do We Know Already?

The last bits of data that came from the DART spacecraft right before impact show that it was on course. The fact that the images stopped transmitting after the target point was reached can only mean that the impact was a success.

While there is likely a lot of information to be learned from the images taken by DART, the world will have to wait to learn whether the deflection was also a success. Fifteen days before the impact, DART released a small satellite with a camera that was designed to document the entire impact. The small satellite’s sensors should have taken images and collected information, but given that it doesn’t have a large antenna onboard, the images will be transmitted slowly back to Earth, one by one, over the coming weeks. 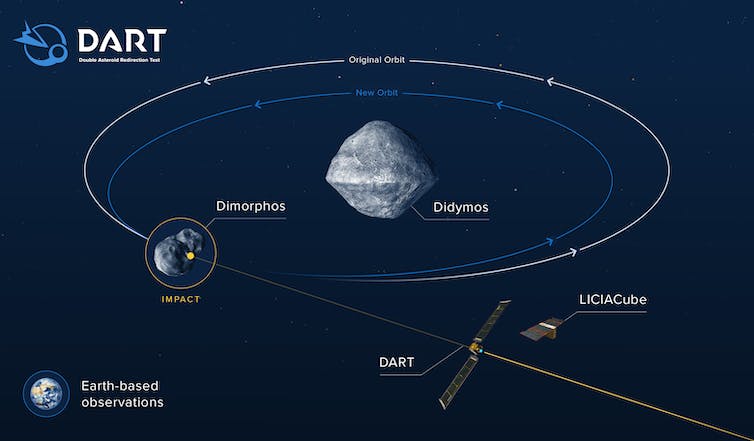 The force from DART’s impact should slightly shift the orbit of Dimorphos around Didymos. NASA/Johns Hopkins APL

4. What Does the Test Mean for Planetary Defense?

I believe this test was a great proof-of-concept for many technologies that the U.S. government has invested in over the years. And importantly, it proves that it is possible to send a craft to intercept with a minuscule target millions of miles away from Earth. From that standpoint DART has been a great success.

Over the course of the next months and years, researchers will learn just how much deflection the impact caused – and most importantly, whether this type of kinetic impact can actually move a celestial object ever so slightly at a great enough distance to prevent a future asteroid from threatening Earth.

David Barnhart is a Professor of Astronautics at University of Southern California.