A scientist described these flights as "a rollercoaster ride, only you don’t know exactly when the next up or down is coming." 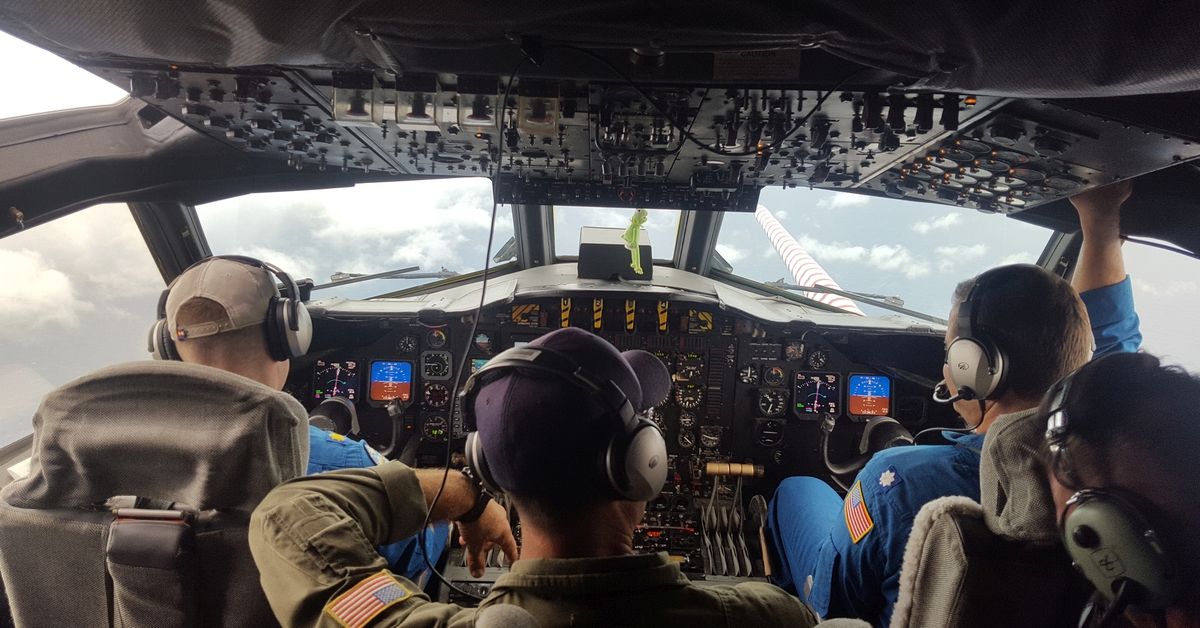 Flying into Hurricane Harvey aboard a a P-3 Hurricane Hunter nicknamed Kermit in 2018. Lt. Kevin Doreumus/NOAA

This interview with Jason Dunion is republished here with permission from The Conversation. This content is shared here because the topic may interest Snopes readers; it does not, however, represent the work of Snopes fact-checkers or editors.

As Hurricane Ian intensifies on its way toward the Florida coast, hurricane hunters are in the sky doing something almost unimaginable: flying through the center of the storm. With each pass, the scientists aboard these planes take measurements that satellites can’t and send them to forecasters at the National Hurricane Center.

Jason Dunion, a University of Miami meteorologist, leads the National Oceanic and Atmospheric Administration’s 2022 hurricane field program. He described the technology the team is using to gauge hurricane behavior in real time and the experience aboard a P-3 Orion as it plunges through the eyewall of a hurricane.

What Happens Aboard a Hurricane Hunter when You Fly into a Storm?

Basically, we’re take a flying laboratory into the heart of the hurricane, all the way up to Category 5s. While we’re flying, we’re crunching data and sending it to forecasters and climate modelers.

In the P-3s, we routinely cut through the middle of the storm, right into the eye. Picture an X pattern – we keep cutting through the storm multiple times during a mission. These might be developing storms, or they might be Category 5s. 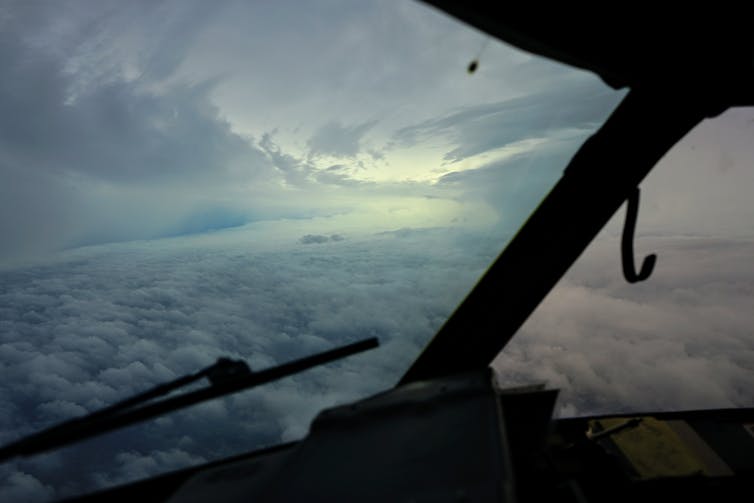 In the eye of Hurricane Teddy in 2020. The eye is the calmest part of the storm, but it’s surrounded by the most intense part: the eyewall. Lt. Cmdr. Robert Mitchell/NOAA Corps

We’re typically flying at an altitude of around 10,000 feet, about a quarter of the way between the ocean surface and the top of the storm. We want to cut through the roughest part of the storm because we’re trying to measure the strongest winds for the Hurricane Center.

That Has To Be intense. Can You Describe What Scientists Are Experiencing on These Flights?

My most intense flight was Dorian in 2019. The storm was near the Bahamas and rapidly intensifying to a very strong Category 5 storm, with winds around 185 mph. It felt like being a feather in the wind. 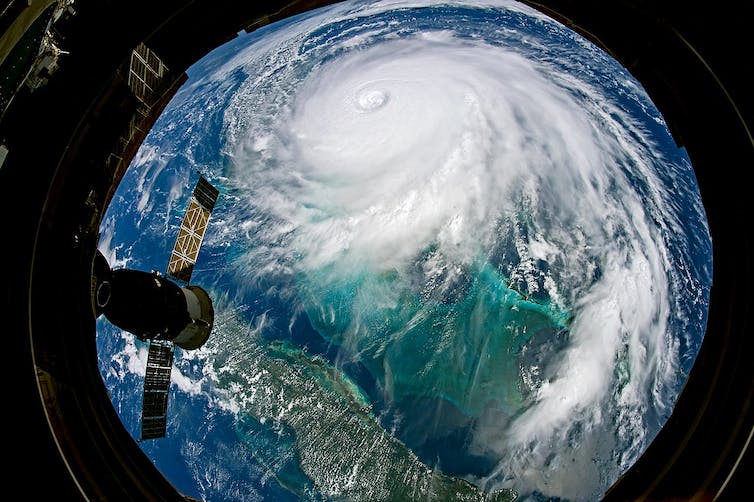 At one point, we had G-forces of 3 to 4 Gs. That’s what astronauts experience during a rocket launch. We can also get zero G for a few seconds, and anything that’s not strapped down will float off.

Even in the rough parts of the storm, scientists like myself are busy on computers working up the data. A technician in the back may have launched a dropsonde from the belly of the plane, and we’re checking the quality of the data and sending it off to modeling centers and the National Hurricane Center. 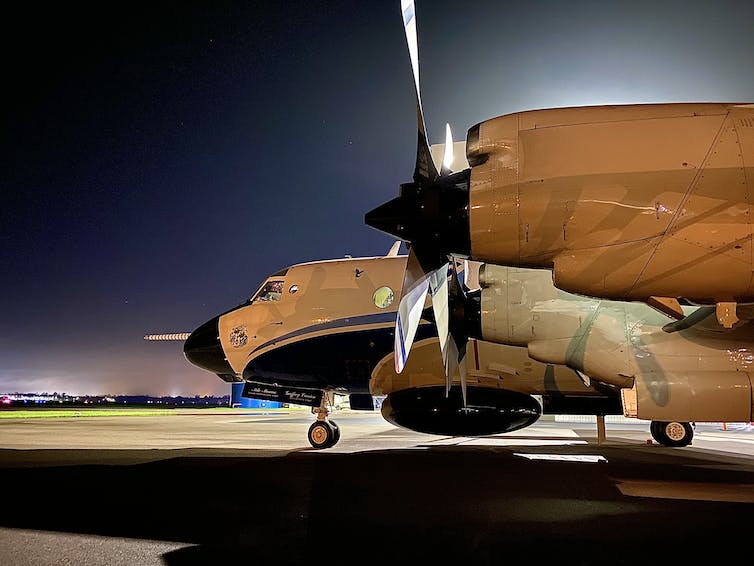 What Are You Learning About Hurricanes from These Flights?

One of our goals is to better understand why storms rapidly intensify.

Rapid intensification is when a storm increases in speed by 35 mph in just a day. That equates to going from Category 1 to a major Category 3 storm in a short period of time. Ida (2021), Dorian (2019) and Michael (2018) are just a few recent hurricanes that rapidly intensified. When that happens near land, it can catch people unprepared, and that gets dangerous fast.

Since rapid intensification can happen in a really short time span, we have to be out there with the hurricane hunters taking measurements while the storm is coming together. 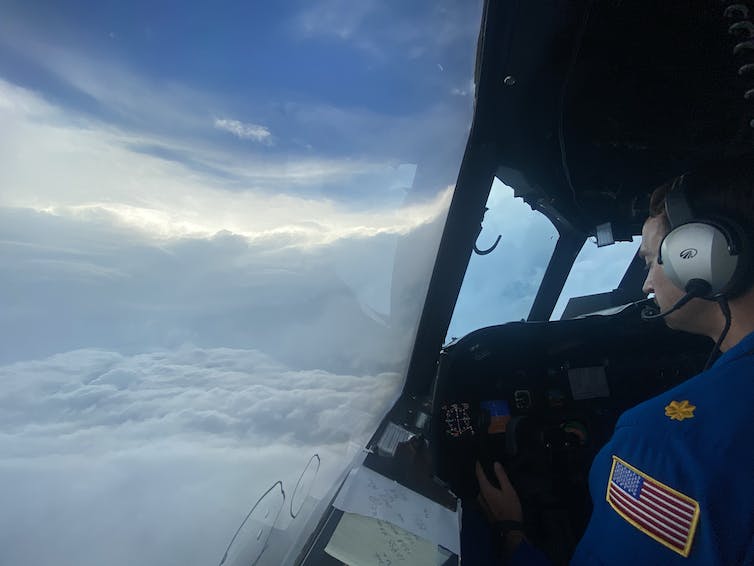 So far, rapid intensification is hard to predict. We might start to see the ingredients quickly coming together: Is the ocean warm to a great depth? Is the atmosphere nice and juicy, with a lot of moisture around the storm? Are the winds favorable? We also look at the inner core: What does the structure of the storm look like, and is it starting to consolidate?

Satellites can offer forecasters a basic view, but we need to get our hurricane hunters into the storm itself to really pick the hurricane apart.

What Does a Storm Look Like when It’s Rapidly Intensifying?

Hurricanes like to stand up straight – think of a spinning top. So, one thing we look for is alignment.

A storm that isn’t yet fully together might have low-level circulation, a few kilometers above the ocean, that isn’t lined up with its mid-level circulation 6 or 7 kilometers up. That isn’t a very healthy storm. But a few hours later, we might fly back into the storm and notice that the two centers are more lined up. That’s a sign that it could rapidly intensify.

We also look at the boundary layer, the area just above the ocean. Hurricanes breathe: They draw air in at low levels, the air rushes up at the eyewall, and then it vents out at the top of the storm and away from the center. That’s why we get those huge updrafts in the eyewall.

So we might watch our dropsonde or tail doppler radar data for how the winds are flowing at the boundary layer. Is that really moist air rushing in toward the center of the storm? If the boundary layer is deep, the storm can also take a bigger inhale. 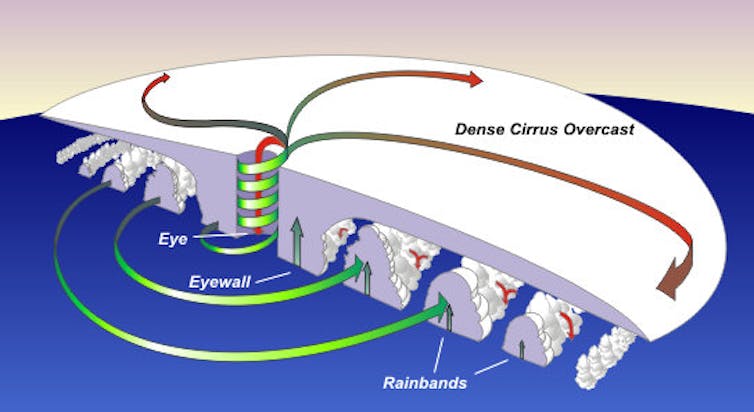 We also look at the structure. A lot of times the storm looks healthy on satellite, but we’ll get in with the radar and the structure is sloppy or the eye may be filled with clouds, which tells us the storm isn’t quite ready to rapidly intensify. But, during that flight, we might start to see the structure change pretty quickly.

Air in, up and out – the breathing – is a great way to diagnose a storm. If that breathing looks healthy, it can be a good sign of an intensifying storm.

What Instruments Do You Use To Measure and Forecast Hurricane Behavior?

We need instruments that not only measure the atmosphere but also the ocean. The winds can steer a storm or tear it apart, but the ocean heat and moisture are its fuel.

We use dropsondes to measure temperature, humidity, pressure and wind speed, and send back data every 15 feet or so all the way to the ocean surface. All of that data goes to the National Hurricane Center and to modeling centers so they can get a better representation of the atmosphere. 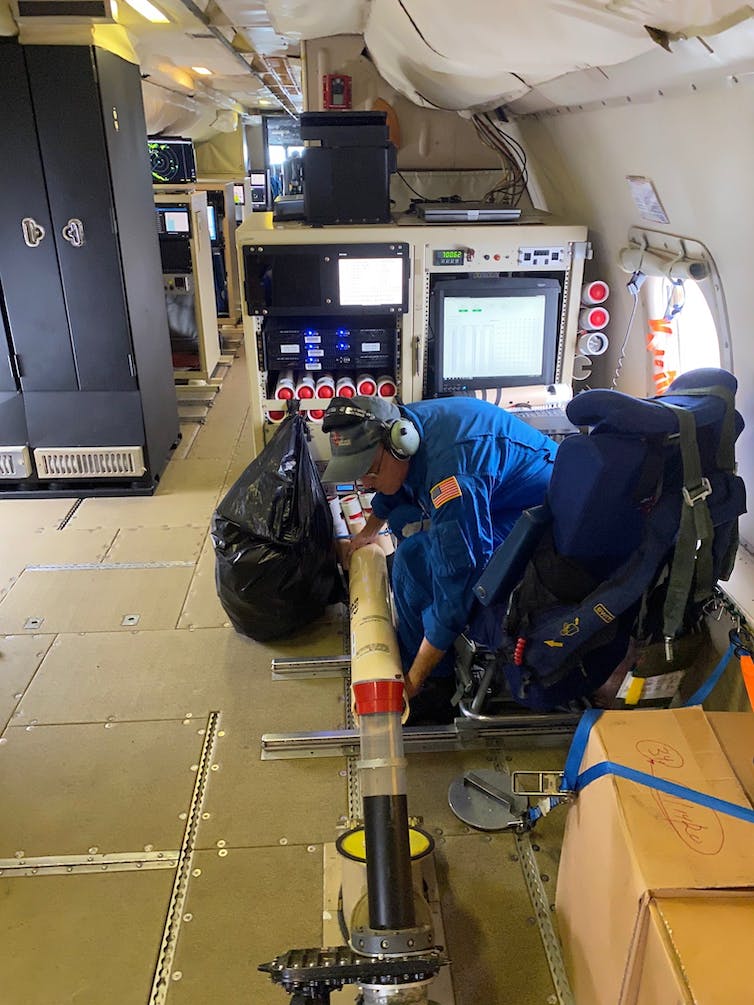 One P-3 has a laser – a CRL, or compact rotational raman LiDAR – that can measure temperature, humidity and aerosols from the aircraft all the way down to the ocean surface. It can give us a sense of how juicy the atmosphere is, so how conducive it is for feeding a storm. The CRL operates continuously over the entire flight track, so you get this beautiful curtain below the aircraft showing the temperature and humidity.

The planes also have tail doppler radars, which measure how moisture droplets in the air are blowing to determine how the wind is behaving. That gives us a 3D look at the wind field, like an X-ray of the storm. You can’t get that from a satellite.

We also launch ocean probes call AXBTs – aircraft expendable bathythermograph – out ahead of the storm. These probes measure the water temperature down several hundred feet. Typically, a surface temperature of 26.5 degrees Celsius (80 Fahrenheit) and above is favorable for a hurricane, but the depth of that heat is also important.

If you have warm ocean water that’s maybe 85 F at the surface, but just 50 feet down the water is quite a bit colder, the hurricane is going to mix in that cold water pretty quickly and weaken the storm. But deep warm water, like we find in eddies in the Gulf of Mexico, provides extra energy that can fuel a storm.

The depth of ocean heat as Hurricane Ida headed for a warm eddy boundary on Aug. 28, 2021. University of Miami, CC BY-ND

This year, we’re also testing a new technology – small drones that we can launch out of the belly of a P-3. They have about a 7- to 9-foot wingspan and are basically a weather station with wings.

One of these drones dropped in the eye could measuring pressure changes, which indicate whether a storm is getting stronger. If we could drop a drone in the eyewall and have it orbit there, it could measure where the strongest winds are – that’s another important detail for forecasters. We also don’t have a lot of measurements in the boundary layer because it’s not a safe place for a plane to fly.

You Also Targeted the Cabo Verde Islands off Africa for the First Time This Year. What Are You Looking for There?

The Cabo Verde Islands are in the Atlantic’s hurricane nursery. The seedlings of hurricanes come off Africa, and we’re trying to determine the tipping points for theses disturbances to form into storms.

Over half the named storms we get in the Atlantic come from this nursery, including about 80% of the major hurricanes, so it’s important, even though the disturbances are maybe seven to 10 days ahead of a hurricane forming.

In Africa, a lot of thunderstorms develop along the Sahara desert’s southern border with the cooler, moister Sahel region in the summer. The temperature difference can cause ripples to develop in the atmosphere that we call tropical waves. Some of those tropical waves are the precursors for hurricanes. However, the Saharan air layer – huge dust storms that come rolling off Africa every three to five days or so – can suppress a hurricane. These storms peak from June to mid-August. After that, tropical disturbances have a better chance of reaching the Caribbean.

At some point not too far in the future, the National Hurricane Center will have to do a seven-day forecast, rather than just five days. We’re figuring out how to improve that early forecasting.

Jason Dunion, is a Research Meteorologist at the University of Miami. This article is republished from The Conversation, an independent nonprofit news organization dedicated to sharing the knowledge of academic researchers, under a Creative Commons license. Read the original article.