The recipes have shaped the foods that American Jews have eaten, guiding what scholars call “vernacular religion,” or religion as it is lived, writes this University of Michigan historian. 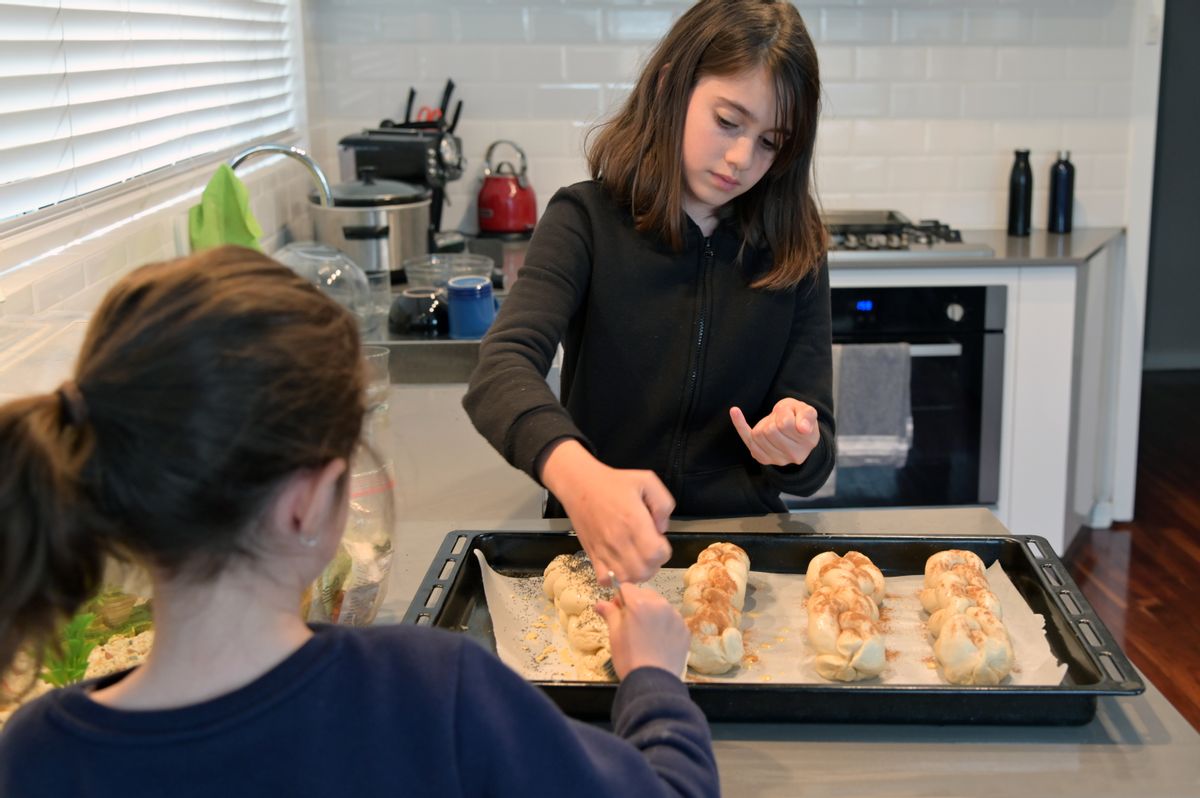 This article by Deborah Dash Moore is republished here with permission from The Conversation. This content is shared here because the topic may interest Snopes readers; it does not, however, represent the work of Snopes fact-checkers or editors.

The end of August inaugurated the Hebrew month of Elul, when Jews all over the world start getting ready for the High Holidays: the Jewish New Year of Rosh Hashana followed 10 days later by the Day of Atonement, Yom Kippur.

Rabbis are polishing their sermons for one of the few times they can be confident of a large congregation ready to hear what they have to say. Cantors, who lead congregants in worship, are practicing the special nusach, melodies used during the High Holidays for prayers. Choir leaders meet with their group members to rehearse hymns and other songs. And those who cook are thinking about the meals they will serve.

Although Yom Kippur is a day of fasting, it is preceded by a large dinner and concludes with a meal to break the fast. Rosh Hashana, by contrast, summons up many meals. A large, multicourse feast opens the first evening, to be followed by another full dinner midday on the first day of the holiday and then a third substantial meal for the second day of the holiday. These feasts traditionally include fish, soup, meat, vegetables, fruit, bread, wine and, of course, a sweet dessert.

The wish for a sweet year gets expressed in food. Honey is a key ingredient. So are apples, since they are plentiful in this season.

As a historian of American Jews, I have been fascinated by the changing character of what are considered “Jewish” foods as expressed in cookbooks. These recipes have shaped the foods that American Jews have eaten, guiding what scholars call “vernacular religion,” or religion as it is lived.

Jewish American cookbooks across the 20th century have influenced the shifting tastes of American Jews’ vernacular religion, even as they have often reflected those tastes.

How Kosher Food Changed in America

Judaism possesses an elaborate system that determines what food observant Jews can eat and which ones can be eaten together. Following these guidelines is called “keeping kosher”: either something is kosher and can be eaten or it is not.

In the United States, the growth of industrial food production for profit stimulated a wide array of products that could receive a symbol that labeled them as kosher. These range from the Orthodox Union’s OU symbol to a simple K to symbols that have a male rabbi’s name attached to them indicating his approval of the product. These multiple branding systems mean that Jews encounter a supermarket of Jewish choices, allowing each individual to decide just what products to buy.

Some people buy only products labeled “glatt kosher,” a reference that originally referred to meat and the inspection of an animal’s lungs. In the U.S., Jews expanded the definition to emphasize a stringency that labeled only some foods sufficiently kosher to be eaten. Other people adopt a wide range of individual options.

Some reflect the prosperity of American Jews, such as having two sets of dishes, silverware and pots – one for meat and the other for dairy. Other variations register Jewish desires to enjoy “eating out” and tasting tref, or nonkosher, combinations.

Still other versions of kosher stem from industrial food production and the development of labels that allow each consumer to decide just which ones they will follow. The result leads to a kind of personalized form of kosher practice, one potentially with almost infinite variety.

As literary scholar Josh Lambert observed in his essay “One Man’s Kosher is Another Man’s Treif,” “my parents have never tasted swordfish, but adore caviar. In other words, they – like many people – have a kashrut [kosher] standard that makes sense to nobody but themselves.”

This diversity leaves American Jews, especially women who still do most of the food preparation in Jewish homes, with a complex conundrum. Which foods should they cook? How should they cook this food? Should they turn to recipes handed down by mothers and grandmothers? Or should they try something new and different?

The conundrum is not new. Jews initially came to the United States as immigrants. Many left behind their parents and grandparents. Most possessed a limited knowledge of food preparation. Into this gap stepped women who wrote cookbooks.

Although the earliest Jewish cookbooks date to 1815 in Europe, the first American Jewish cookbook did not appear until 1871. Esther Levy’s “Jewish Cookery Book on Principles of Economy Adapted for Jewish Housekeepers” was published in Philadelphia.

Soon competition flourished as other publishers and writers saw the potential market with increasing numbers of Jewish immigrants arriving on American shores.

These Jewish cookbooks, written in Yiddish and German as well as English, guided women in how to prepare traditional Jewish foods even as they also promoted American food, such as apple pie. In a sense, they stepped into the breach within families caused by immigration, teaching their readers what to do and how to do it. Many also included explanations of the kosher system as well as holiday menus.

Even after Jewish families became intergenerational, and children often had access to traditional Jewish recipes through their grandparents, the popularity of Jewish cookbooks did not diminish. As Joan Nathan wrote in her 2004 “Jewish Holiday Cookbook,” “Like many Jews in America, I have become passionately involved in discovering my roots.” And that passion has led her, as a food writer, to seek “to discover the origin” of Jewish dishes and their ingredients along with the recipe. 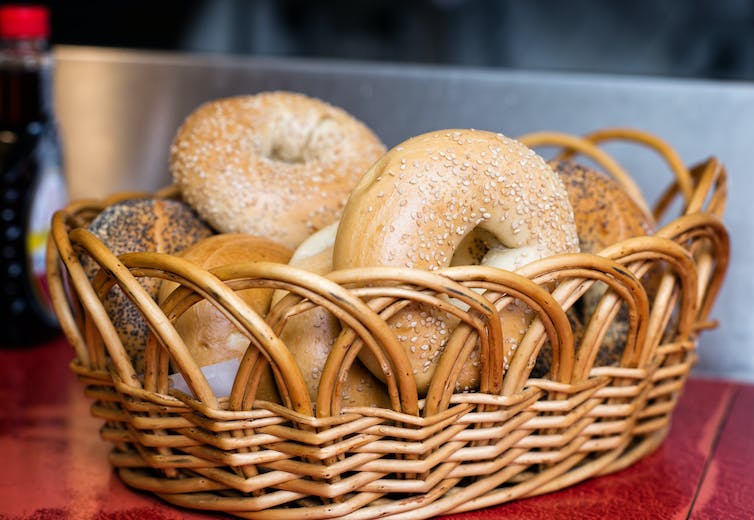 Bagels came to be seen as Jewish food even though they have no particular association with Jews. Vicki Jauron, Babylon and Beyond Photography/Moment via Getty Images

The ongoing interest in Jewish food as expressed in diverse cookbooks prompted Nurith Gertz, an Israeli scholar of Jewish culture, and me to include excerpts – both recipes and the stories often told that accompanied them – from Jewish cookbooks in an anthology for The Posen Library of Jewish Culture and Civilization.

We recognized the recipes and the stories told around them as forms of vernacular Judaism – what Jews, especially American Jews, turned to when they wanted to cook Jewish food. Jewish foods as presented in recipes formed part of Jewish culture just as much as poetry and sermons, paintings and memoirs.

One of the recipes we decided to include was one for baking bagels by Matthew Goodman in “Jewish Food: The World at Table.” The round roll with a hole in it arrived in America with Jewish immigrants. Over the course of the 20th century, the hole grew ever smaller and the bagel ever more plump. But the bagel makers’ union kept a pretty tight lock on the two-step process of making bagels – first boiling, then baking – until frozen bagels were introduced.

After frozen bagels came all sorts of other innovations, like blueberry bagels, not to mention bagels that were only baked and so not particularly chewy. As it turns out, Jews began to celebrate bagels as a distinctively “Jewish food” as they became more popular: Bagels were leaving the Jewish fold and starting to be seen as an American food, with no particular associations with Jews.

Although bagels with cream cheese and smoked salmon are still popular among American Jews to break the fast at the end of Yom Kippur, many Americans put all kinds of foods on bagels, including lots of nonkosher combinations.

Jewish Food on the Move

Only some of what American Jews ate for Rosh Hashana a century ago, or even 50 years ago, endures today.

Chicken soup and gefilte fish, which came to the United States with Russian Jews as foods associated with the Friday evening meal at the beginning of the Sabbath, are still part of the Jewish American palate. But brisket and even turkey have retreated before preferences for tastes such as Moroccan or Persian chicken dishes or vegetarian stews drawn from less familiar Jewish cultures.

I particularly miss a sweet dessert called taiglach. The small cubes of baked dough drenched in spiced honey, decorated with nuts and shaped into balls appeared on our table only during the High Holidays. Everyone pulled pieces to eat and licked their fingers. Neither my mother nor my grandmothers nor I ever made it – although my more adventurous sister did. We bought it from Jewish bakeries. But those bakeries are long gone.

The memory remains, as does the wish for a sweet new year that can be tasted.

Deborah Dash Moore is a Frederick G. L. Huetwell Professor of History and Professor of Judaic Studies at University of Michigan.