Virologist: Here's What You Should Know About Polio In the US

Reports of an unvaccinated man in New York contracting the disease surfaced in July 2022, and public health officials say they are treating that single case "as just the tip of the iceberg." 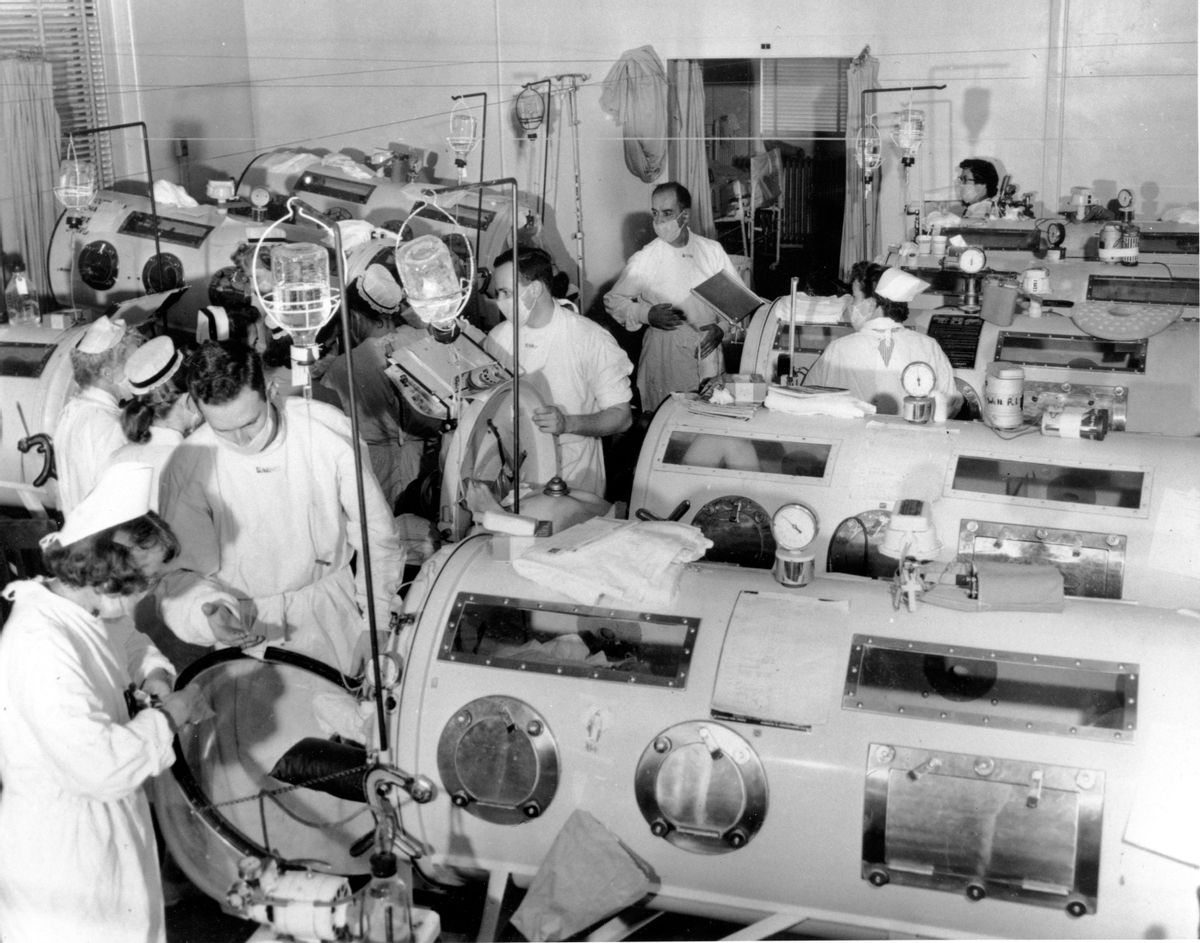 Critical-care patients in the emergency polio ward at Haynes Memorial Hospital in Boston in August 1955. (Image Via Associated Press photo)

This article by Rosemary Rochford is republished here with permission from The Conversation. This content is shared here because the topic may interest Snopes readers; it does not, however, represent the work of Snopes fact-checkers or editors.

Fears of polio gripped the U.S. in the mid-20th century. Parents were afraid to send their children to birthday parties, public pools or any place where children mingled. Children in wheelchairs served as a stark reminder of the ravages of the disease.

To prevent polio outbreaks, government officials used tactics now familiar in the era of COVID-19: They closed public spaces and shut down restaurants, pools and other gathering places.

In 1952, two years prior to the introduction of a trial polio vaccine, there were an estimated 58,000 cases of polio and 3,145 deaths due to polio in the U.S.. These cases included children who were paralyzed for life. But those numbers dropped dramatically following a widespread vaccination campaign against polio, beginning in 1955.

By the 1970s, there were fewer than 10 cases of paralysis due to polio in the U.S., and the polio virus was considered eliminated from the U.S. by 1979. Since then, collective fear of the virus has been mostly lost to history – many people alive today are lucky enough not to know someone who has experienced polio.

So when news broke in July 2022 that an unvaccinated adult man in New York had contracted polio – the first case in the U.S. since 2013 – and developed paralysis from the disease, it sent a ripple of fear throughout the public health community and raised the question of whether an old foe was making a comeback.

I am a virologist and a professor of immunology and microbiology and have spent my career both teaching about and doing research on how viruses can cause disease.

There is no cure for polio. The only treatment is prevention. And the tool for prevention is vaccination, the same tool that eliminated polio in the U.S. in the first place.

https://www.youtube.com/embed/dJF57YyxMSk?
Health experts are urging unvaccinated Americans to get vaccinated against polio.

Life Cycle of the Poliovirus

Polio – or poliomyelitis – the disease, is caused by the poliovirus, which is passed from person to person through the mouth. And while no one would knowingly ingest a virus, touching a contaminated object like a spoon or a glass or accidentally swallowing contaminated water can unknowingly lead to infection.

When someone is infected with the poliovirus, they shed the infectious virus in their feces. This is why recent reports that poliovirus has been circulating in New York City wastewater for months and that the virus now has been detected in three New York counties are particularly concerning.

In August 2022, New York State Health Commissioner Mary Basset said that the state health department is “treating the single case of polio as just the tip of the iceberg of much greater potential spread.”

“Based on earlier polio outbreaks,” she added, “New Yorkers should know that for every one case of paralytic polio observed, there may be hundreds of other people infected.”

A single case of polio reflects a larger potential spread of the virus because most people infected either don’t show any symptoms or have a very mild illness with symptoms similar to the flu. But even without symptoms, an infected person is still excreting virus in their feces, which means they can be a source of infection to others.

The virus, which is very stable in the environment, is easily spread through surface contamination. For this reason, hand-washing is a critical prevention tool. Although many disinfecting agents, such as alcohol or diluted Lysol, fail to inactivate the virus, chlorine bleach does destroy it. This is why public health officials started chlorinating swimming pools decades ago in order to inactivate the polio virus.

Typically, the human body uses stomach acid to protect against ingested viruses. But poliovirus can survive stomach acid to travel to your gastrointestinal tract. There, the virus reproduces itself to establish an infection.

What is Paralytic Polio?

Unfortunately, one person out of about 200 people infected with poliovirus will develop paralysis. Scientists still don’t know why one person is susceptible to the paralytic disease while most are not.

In the small subset of people that get paralytic polio, the virus can attack the lower motor neurons found in the brain stem and spinal cord, which are important for controlling muscles. Infection of those neurons leads to the muscle paralysis that is characteristic of paralytic polio. The legs are typically affected – often on only one side of the body – and paralysis can range from mild to severe. Other muscle groups can also be affected.

In the worst cases of paralytic polio, the virus can damage the centers of the nervous system that control breathing. Respirators known as “iron lungs” were early medical devices that aided those with damaged respiratory muscles, helping them breathe until their muscles healed enough to work on their own. Patients could die when the paralysis was severe and sustained.

https://www.youtube.com/embed/jrwuq6T2dxY?
Anti-vaccination sentiments and an overall drop in routine vaccination rates during the COVID-19 pandemic have likely contributed to the resurfacing of the poliovirus in the U.S.

Although polio can be devastating for those who contract the severe form of it, most people’s immune systems are well-equipped to combat it. When someone recovers from polio, researchers can detect poliovirus-fighting antibodies in the blood.

But even long-term survivors of paralytic polio can develop late-onset muscle weakness and fatigue, which is known as post-polio syndrome. While the muscular effects of post-polio syndrome are well-recognized, a number of other symptoms can be associated with post-polio syndrome, including chronic pain, sleep disturbances, cold intolerance and difficulty swallowing.

Because post-polio syndrome is diagnosed only based on symptoms, there is no consensus on the number of polio survivors who develop it, but estimates range from 15% to upward of 80%.

Prevention of Polio is Key

The decline in polio in the U.S. and globally is a direct result of the introduction of vaccines and the willingness of the public to accept them. In 1988, the World Health Organization, in partnership with Rotary International, the Centers for Disease Control and Prevention and other national governments, launched the Global Polio Eradication Initiative with the goal to wipe out polio worldwide, as is the case with smallpox.

When this initiative was launched, there were still an estimated 350,000 children with polio in 125 countries. In 2021, there were only six reported cases.

Two types of polio vaccine are in use worldwide. The one used in the U.S. since 2000 is an injection made from inactivated poliovirus. Inactivation kills the virus and prevents it from spreading. Children in the U.S. get this shot at 2 months, 4 months and between 6 to 15 months of age, and it essentially provides lifelong protection from polio.

The second vaccine type, still in use in many parts of the world, is an attenuated – or weakened – form of the virus that is taken orally. In places where community transmission remains significant, like Pakistan, the oral vaccine is preferred because it prevents people from getting polio and also stops person-to-person transmission. In the U.S., where person-to-person transmission of the poliovirus has been virtually nonexistent for decades, the inactivated vaccine is preferred since the focus is on preventing disease in the vaccinated person and there’s less concern about spreading the virus.

But in extremely rare cases, the vaccine virus mutates after it’s been excreted in feces. And if immunization levels fall below a critical threshold – as is the case in some areas of the world – this poliovirus can cause disease. The recent New York polio case has been traced back to a mutated vaccine-derived poliovirus thought to be acquired overseas.

Most people in the U.S. are vaccinated through routine childhood vaccinations. Because immunity to polio following vaccination is lifelong, the CDC is not recommending booster vaccinations for the general population for people who completed the full series. However, the CDC does recommend that anyone who has not been vaccinated against polio virus get vaccinated, including adults.

In my office, I keep a painting of Dr. Jonas Salk, the virologist who developed the first polio vaccine. It serves as my reminder of the importance of biomedical research to help eliminate human suffering caused by infectious diseases.