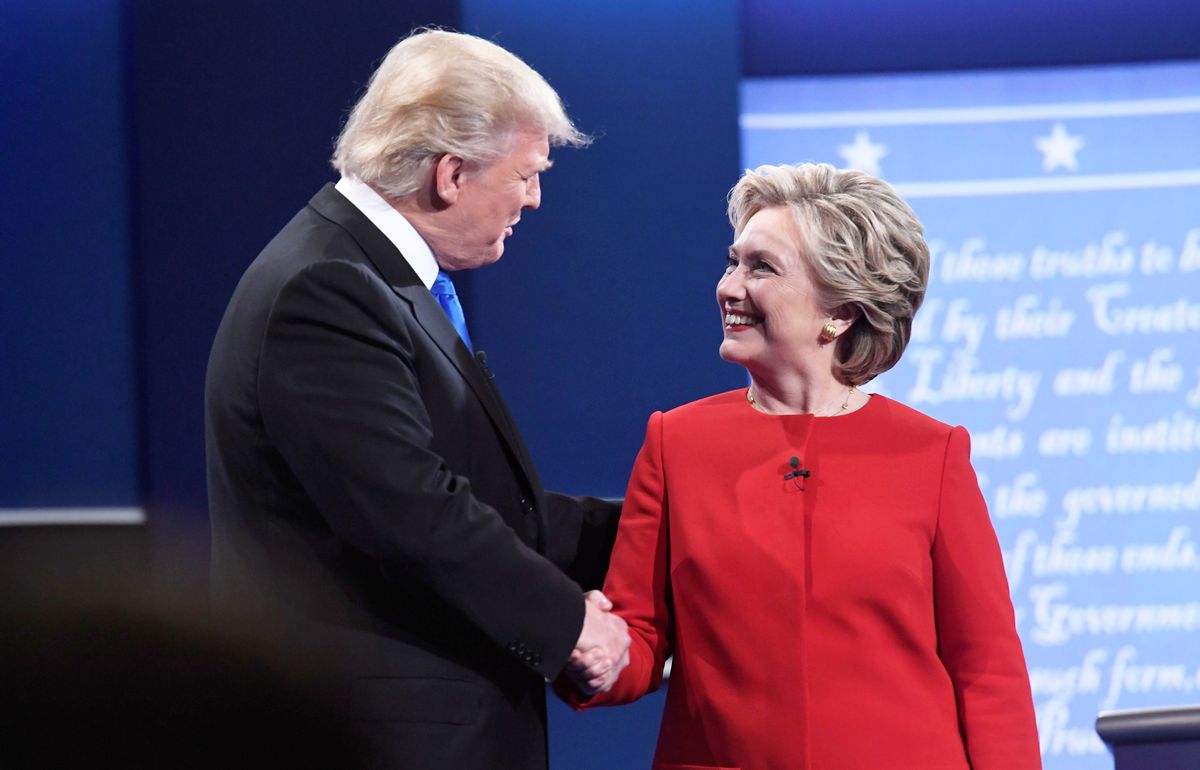 On Sept. 2, 2022, readers asked that we verify a quote meme titled "Unequal Justice" that bore the image and name of former FBI Director James Comey. It also showed a picture of FBI Director Christopher Wray doctored onto Comey's shoulder. The meme included a purported quote from Comey on the subject of the past federal investigation into former U.S. Secretary of State Hillary Clinton's handling of classified information on personal email servers. No criminal charges were ever brought against Clinton, who served under former U.S. President Barack Obama from 2009 through 2013.

At the time that the meme was being shared, the U.S. Department of Justice was investigating another prominent politician regarding the handling of classified information: former U.S. President Donald Trump. This was what the meme was referencing with the title, "Unequal Justice." Clinton, a Democrat, and Trump, a Republican, previously faced off in the 2016 U.S. presidential election, with the latter being victorious. This was the meme in question, which was being shared on social media.

In this story, we'll break down the text of the meme, which we found to be at least somewhat misleading. We'll also reflect on genuine statements made by Comey and will detail some of the differences between the federal investigations of Clinton and Trump. Instead of providing readers with a simple fact-check rating for such a large subject, we have instead chosen to only publish detailed, factual information. This way, readers will be encouraged to fully understand the truth of the matter.

The quote meme in question was riddled with grammatical errors. It read as follows:

Unequal Justice.
James Comey as Former FBI Director.
And I Quote.
"Even though Mrs. Clinton kept classified documents on a illegal server
Then destroyed the supeoned classified documents and devices they were on
And used hammers and BleachByte to destroy the hard drives?
No prosecutor would touch this
So we are not recommending any Charges."
Remember?

We found no evidence that Comey ever said these exact words. Parts of the quote meme appeared to be sourced from one of Comey's past statements, then changed for the meme with no context in sight.

On July 5, 2016, Comey made a public statement regarding the FBI investigation into Clinton's handling of classified materials on her personal email servers.

Readers are free to watch the video and look through the transcript from his statement.

The beginning of the quote meme said that Comey said Clinton "kept classified documents on an illegal server."

With respect to the thousands of e-mails we found that were not among those produced to State, agencies have concluded that three of those were classified at the time they were sent or received, one at the Secret level and two at the Confidential level. There were no additional Top Secret e-mails found. Finally, none of those we found have since been “up-classified.”

The quote meme included the word "illegal" in reference to Clinton's email servers. However, Comey did not use this word in his statement.

The next part of the quote meme said that Comey said Clinton "destroyed the subpoenaed classified documents and devices they were on" and that she used hammers and "BleachByte" to "destroy the hard drives."

First, BleachBit (not "BleachByte") is software that aims to free up disk space, according to the company's website. The program also "includes advanced features such as shredding files to prevent recovery" and "wiping free disk space to hide traces of files deleted by other applications." The company once addressed the FBI investigation in a blog post.

Previously, false rumors said that Clinton poured actual bleach on emails or on hard drives associated with the personal servers. According to the Washington Post, the confusion stemmed from the name of the software, BleachBit.

Here's what Comey had to say on this subject in his July 2016 statement:

I should add here that we found no evidence that any of the additional work-related e-mails were intentionally deleted in an effort to conceal them. Our assessment is that, like many e-mail users, Secretary Clinton periodically deleted e-mails or e-mails were purged from the system when devices were changed. Because she was not using a government account—or even a commercial account like Gmail—there was no archiving at all of her e-mails, so it is not surprising that we discovered e-mails that were not on Secretary Clinton’s system in 2014, when she produced the 30,000 e-mails to the State Department.

It is also likely that there are other work-related e-mails that they did not produce to State and that we did not find elsewhere, and that are now gone because they deleted all e-mails they did not return to State, and the lawyers cleaned their devices in such a way as to preclude complete forensic recovery.

We also previously reported on this subject involving hammers and BleachBit, finding that an aide to Clinton told the FBI that, in the past, he twice disposed of her unwanted mobile devices by breaking or hammering them.

'No Prosecutor Would Touch This'

The end of the quote meme claimed that Comey said, "no prosecutor would touch this," referring to the case against Clinton's handling of classified materials. It ended with, "so we are not recommending any charges."

We found no evidence that Comey ever said the exact words, "no prosecutor would touch this." However, he did say that "no reasonable prosecutor would bring such a case," which was very similar. It was also true that he said that the FBI's view was that no charges were appropriate in the case:

Although there is evidence of potential violations of the statutes regarding the handling of classified information, our judgment is that no reasonable prosecutor would bring such a case. Prosecutors necessarily weigh a number of factors before bringing charges. There are obvious considerations, like the strength of the evidence, especially regarding intent. Responsible decisions also consider the context of a person’s actions, and how similar situations have been handled in the past.

In looking back at our investigations into mishandling or removal of classified information, we cannot find a case that would support bringing criminal charges on these facts. All the cases prosecuted involved some combination of: clearly intentional and willful mishandling of classified information; or vast quantities of materials exposed in such a way as to support an inference of intentional misconduct; or indications of disloyalty to the United States; or efforts to obstruct justice. We do not see those things here.

To be clear, this is not to suggest that in similar circumstances, a person who engaged in this activity would face no consequences. To the contrary, those individuals are often subject to security or administrative sanctions. But that is not what we are deciding now.

As a result, although the Department of Justice makes final decisions on matters like this, we are expressing to Justice our view that no charges are appropriate in this case.

Again, this meme about Comey and Clinton was being shared in September 2022. Its title was "Unequal Justice," which seemed to reference the separate federal investigation into Trump's handling of sensitive documents. At the time, the investigation of Trump was making the news on an almost daily basis. Weeks earlier, it became public that federal agents had searched Trump's Mar-a-Lago property in Florida for classified materials. They found hundreds of them.

In Comey's statement about the Clinton investigation, he said that the FBI found no evidence of the following: "clearly intentional and willful mishandling of classified information; or vast quantities of materials exposed in such a way as to support an inference of intentional misconduct; or indications of disloyalty to the United States; or efforts to obstruct justice."

Here's how Trump's case was different.

On Aug. 26, The New York Times reported on the details found in a Justice Department affidavit. The affidavit "asserted that there was 'probable cause to believe that evidence of obstruction will be found at' Mr. Trump’s Mar-a-Lago compound, indicating that prosecutors had evidence suggesting efforts to impede the recovery of government documents."

Further, on Aug. 31, The New York Times also reported on a court filing by the Justice Department that said it had "sought a search warrant of former President Donald J. Trump’s residence in Florida after obtaining evidence that highly classified documents were likely moved around and concealed and that Mr. Trump’s representatives had falsely claimed all sensitive material had been returned."

The investigation into Trump is ongoing and we will continue to provide reporting on the subject.

Comey, James B. “Statement by FBI Director James B. Comey on the Investigation of Secretary Hillary Clinton’s Use of a Personal E-Mail System.” FBI, 5 July 2016, https://www.fbi.gov/news/press-releases/press-releases/statement-by-fbi-director-james-b-comey-on-the-investigation-of-secretary-hillary-clinton2019s-use-of-a-personal-e-mail-system.