Axolotls Can Regenerate Their Brains, Helping to Unlock the Mysteries of Brain Evolution 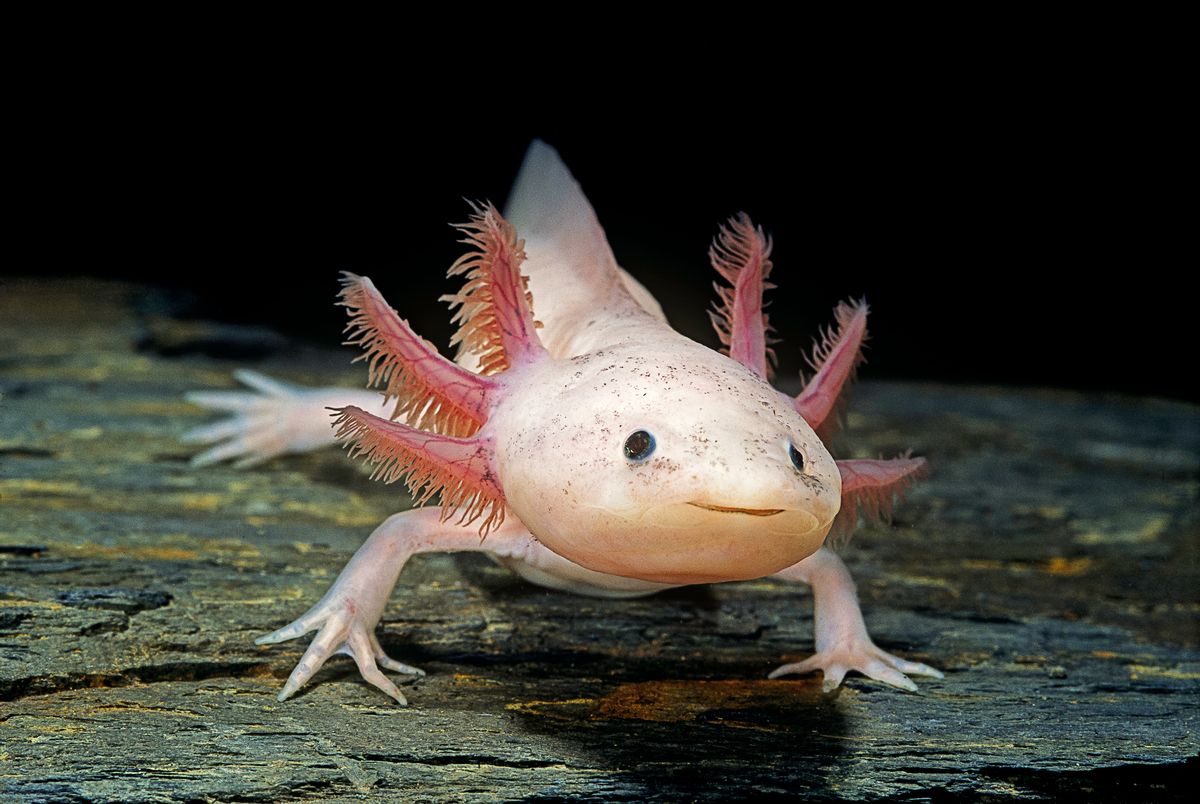 This article by Ashley Maynard is republished here with permission from The Conversation. This content is shared here because the topic may interest Snopes readers; it does not, however, represent the work of Snopes fact-checkers or editors.

The axolotl (Ambystoma mexicanum) is an aquatic salamander renowned for its ability to regenerate its spinal cord, heart and limbs. These amphibians also readily make new neurons throughout their lives. In 1964, researchers observed that adult axolotls could regenerate parts of their brains, even if a large section was completely removed. But one study found that axolotl brain regeneration has a limited ability to rebuild original tissue structure.

So how perfectly can axolotl’s regenerate their brains after injury?

As a researcher studying regeneration at the cellular level, I and my colleagues in the Treutlein Lab at ETH Zurich and the Tanaka Lab at the Institute of Molecular Pathology in Vienna wondered whether axolotls are able to regenerate all the different cell types in their brain, including the connections linking one brain region to another. In our recently published study, we created an atlas of the cells that make up a part of the axolotl brain, shedding light on both the way it regenerates and brain evolution across species.

Why Look at Cells?

Different cell types have different functions. They are able to specialize in certain roles because they each express different genes. Understanding what types of cells are in the brain and what they do helps clarify the overall picture of how the brain works. It also allows researchers to make comparisons across evolution and try to find biological trends across species.

One way to understand which cells are expressing which genes is by using a technique called single-cell RNA sequencing (scRNA-seq). This tool allows researchers to count the number of active genes within each cell of a particular sample. This provides a “snapshot” of the activities each cell was doing when it was collected. https://www.youtube.com/embed/k9VFNLLQP8c?wmode=transparent&start=0 Single-cell RNA sequencing can provide information on the specific function of each cell in a sample.

This tool has been instrumental in understanding the types of cells that exist in the brains of animals. Scientists have used scRNA-seq in fish, reptiles, mice and even humans. But one major piece of the brain evolution puzzle has been missing: amphibians.

Our team decided to focus on the telencephalon of the axolotl. In humans, the telencephalon is the largest division of the brain and contains a region called the neocortex, which plays a key role in animal behavior and cognition. Throughout recent evolution, the neocortex has massively grown in size compared with other brain regions. Similarly, the types of cells that make up the telencephalon overall have highly diversified and grown in complexity over time, making this region an intriguing area to study.

We used scRNA-seq to identify the different types of cells that make up the axolotl telencephalon, including different types of neurons and progenitor cells, or cells that can divide into more of themselves or turn into other cell types. We identified what genes are active when progenitor cells become neurons, and found that many pass through an intermediate cell type called neuroblasts – previously unknown to exist in axolotls – before becoming mature neurons. https://www.youtube.com/embed/uooR4293p_4?wmode=transparent&start=0 Axolotls’ regenerative abilities have been a source of fascination for scientists.

We then put axolotl regeneration to the test by removing one section of their telencephalon. Using a specialized method of scRNA-seq, we were able to capture and sequence all the new cells at different stages of regeneration, from one to 12 weeks after injury. Ultimately, we found that all cell types that were removed had been completely restored.

We observed that brain regeneration happens in three main phases. The first phase starts with a rapid increase in the number of progenitor cells, and a small fraction of these cells activate a wound-healing process. In phase two, progenitor cells begin to differentiate into neuroblasts. Finally, in phase three, the neuroblasts differentiate into the same types of neurons that were originally lost.

Astonishingly, we also observed that the severed neuronal connections between the removed area and other areas of the brain had been reconnected. This rewiring indicates that the regenerated area had also regained its original function.

Adding amphibians to the evolutionary puzzle allows researchers to infer how the brain and its cell types has changed over time, as well as the mechanisms behind regeneration.

When we compared our axolotl data with other species, we found that cells in their telencephalon show strong similarity to the mammalian hippocampus, the region of the brain involved in memory formation, and the olfactory cortex, the region of the brain involved in the sense of smell. We even found some similarities in one axolotl cell type to the neocortex, the area of the brain known for perception, thought and spatial reasoning in humans. These similarities indicate that these areas of the brain may be evolutionarily conserved, or stayed comparable over the course of evolution, and that the neocortex of mammals may have an ancestor cell type in the telencephalon of amphibians. 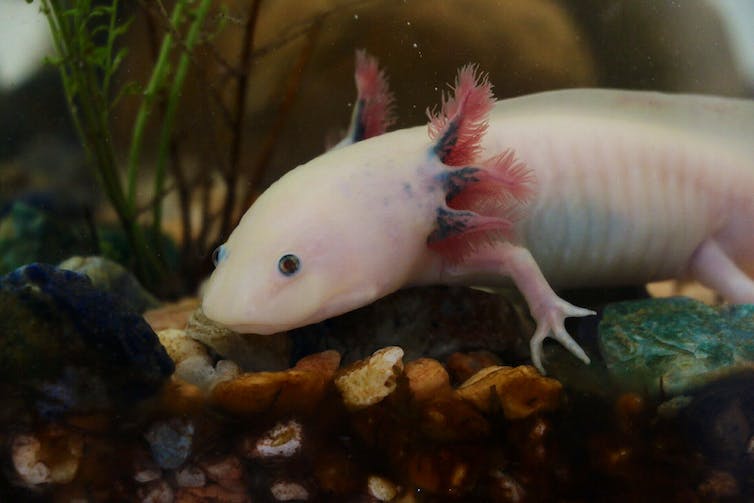 Cracking the mystery of axolotl regeneration could lead to improvements in medical treatments for severe injuries. Amandasofiarana/Wikimedia Commons, CC BY-SA

While our study sheds light on the process of brain regeneration, including which genes are involved and how cells ultimately become neurons, we still don’t know what external signals initiate this process. Moreover, we don’t know if the processes we identified are still accessible to animals that evolved later in time, such as mice or humans.

But we’re not solving the brain evolution puzzle alone. The Tosches Lab at Columbia University explored the diversity of cell types in another species of salamander, Pleurodeles waltl, while the Fei lab at the Guangdong Academy of Medical Sciences in China and collaborators at life sciences company BGI explored how cell types are spatially arranged in the axolotl forebrain.

Identifying all the cell types in the axolotl brain also helps pave the way for innovative research in regenerative medicine. The brains of mice and humans have largely lost their capacity to repair or regenerate themselves. Medical interventions for severe brain injury currently focus on drug and stem cell therapies to boost or promote repair. Examining the genes and cell types that allow axolotls to accomplish nearly perfect regeneration may be the key to improve treatments for severe injuries and unlock regeneration potential in humans.