Elephants are intelligent, social animals known to grieve the loss of their kin. 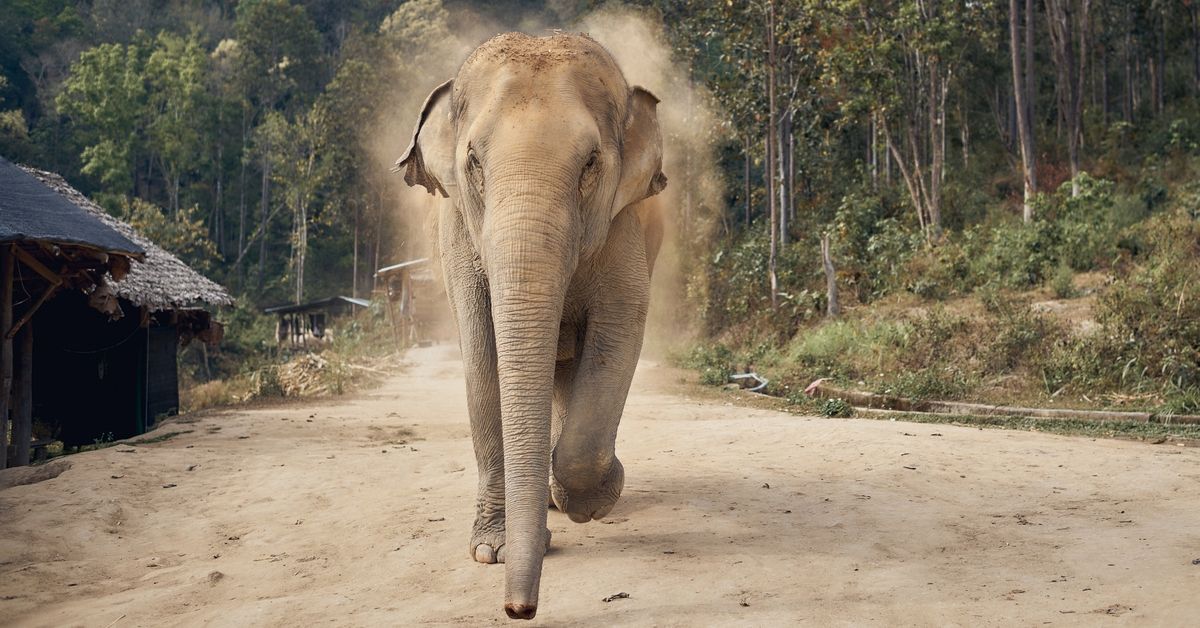 elephant in Thailand stampedes in forest (Image Via Getty Images)

An Indian woman was reportedly trampled to death by an elephant said to have returned to her funeral later that same day, terrorized a village, and attacked her corpse while villagers were performing her last rites.

News of the incident spread online by both local and international news publications, as well as social media users, though the exact details of the incident are conflicting. We’ll break down exactly what we found regarding the event, with the disclaimer that as of this publication, the Snopes newsroom has yet to find an official statement from law enforcement or a government agency verifying the incident. (We’ve contacted four entities and will update the article if we hear back.)

An elderly woman — somewhere between the age of 60 and 70 years old — was reportedly killed in mid-June 2022 by an elephant in the Indian state of Odisha. Maya Murmu was said to have been collecting water in Raipai village outside of the Dalma Wildlife Sanctuary. By email, we contacted the district government of Purbi East Singhbhum where the sanctuary is located, and are awaiting a response. It was reported that the woman died from her injuries at a hospital the same day that she was trampled. During her funeral, a herd of elephants allegedly stormed the village. One of the elephants “arrived there suddenly and took the corpse from the pyre,” reported the online Indian newspaper The Print.

“The elephant again trampled her dead body, threw it and fled,” wrote the publication.

Odisha news channel Kanak News posted a video to its verified Twitter account that appeared to show images of the deceased woman, as well as damage done to the village by the elephants. British tabloid publication Daily Mail cited police officer Lopamudra Nayak as having confirmed the incident. Snopes looked through the police department’s Facebook page and website but did not see an official statement. We also contacted the department by email and will update the article if we receive a response.

We encountered conflicting reports about the precise details of the incident, such as the age of the deceased woman (reports claim she was 60, 68, and 70 years old), as well as the date the incident occurred (some reports say June 11, while others note it was June 9)

We also came across social media users who claimed that the woman threw stones at the elephant while poachers took away the elephant's baby. We did not find a single legitimate news publication that reported this specific detail.

The above rumors led some to speculate that the trampling and alleged funeral attack were acts of revenge.

This too appears to be an unfounded suggestion. None of the news publications we read (which are listed in the source list at the bottom of this story) reported that the woman was either harassing the elephant or assisting poachers.

While we have no reason to disbelieve that the event occurred at all, we are unable to determine whether the same elephant was involved and whether it was a targeted attack. In addition, there are further unanswered questions, such as where the funeral took place, and did it occur in a location where the herd is known to migrate. The funeral stampede may have simply been coincidental rather than an intentional attack.

The daily newspaper Times of India reported that there were about 12 elephants in the herd that caused damage to at least three houses in the village, for which officials were said to have started a compensatory process.

“We have taken steps to provide compensation of Rs 4 lakh to the next of kin of the deceased. Initially, we will release Rs 10,000 for funeral and related rituals from the compensation amount. After the family members apply for house damage assistance, we will start the process for this,” said Rabi Narayan Mohanty, an assistant conservator of forests (ACF), Times of India reported.

We also contacted the Odisha Forest, Environment and Climate Change Department, which is said to be Mohanty's employer. We have not found an official statement by the agency, nor have we yet received a response to our email query.

Human-elephant conflict is relatively common in India. In October 2020, a 70-year-old man was trampled to death by an elephant, reportedly while the victim was returning home from a football tournament. In fact, the World Wildlife Foundation (WWF) estimates that in India, more than 100 people are killed by elephants every year.

India is home to the Asian or Indian elephant, which can spend up to 19 hours a day feeding, produce 220 pounds of dung daily, and wander up to 125 square miles — including through large-scale agricultural crop fields. The endangered animals are largely threatened by habitat loss from increasing human populations.

“Habitat loss forces elephants to seek alternative food sources in the many farms, settlements and plantations that have replaced their ancient forest homes. Elephants are large and destructive animals and small farmers can lose their entire livelihood overnight from an elephant raid. Elephants have also caused millions of dollars of damage to large agricultural operations. As a result of their destructive raids, elephants are often killed in retaliation,” wrote WWF.

As the Independent noted, Odisha is a mineral-rich state and industrial activity has caused an uptick in human-wildlife conflicts. As humans spread further into the wild areas, animals like elephants are more likely to encounter them. At least 42 elephant deaths are thought to have occurred in the state between April and October 2021.

In addition to such conflicts, elephants are also heavily trafficked and illegally sold for their ivory. India’s Wild Life Protection Act of 1972 protects elephants and prohibits poaching, trafficking, and trading of elephants, yet such practices are known to still occur. News reports from the Indian region say that officials of the believe there are incidents of covering up elephant deaths and have launched probe to recover illegally buried elephant perhaps linked to ivory smuggling. Such illegal burials first came to light in November 2021 and in the months since, rangers and employees of the forest guard are said to have been placed under suspension in relation to a “pan-Indian elephant smuggling racket.”

Elephants are among the most highly intelligent and social animals known to grieve the loss of their kin. A study published in the peer-reviewed journal The Royal Society concluded that elephants reacting to the death of one of their herd members, typically one that is very young, will sniff the corpse and touch its face or ears. They also found that elephants will also make “varying types of noise in reaction to a death, and some tried to animate the dead creature.”

But whether the actions of the elephant were intentional and vengeful, or if both incidents even involved the same elephant, remains to be determined.

In summary, details of the supposed incident, and information provided by local and international new reports, are conflicting. A look through official websites and social media accounts of government agencies and law enforcement did not reveal an official statement describing the circumstances of the event. While there is no reason to doubt that a woman was killed by an elephant, or that a herd of elephants later stampeded a crowd at the time of her funeral, we are currently unable to determine whether it was the same elephant responsible for both events, or whether the two events were directly connected.

“Elephant Kills 70-Year-Old and Then Returns to Trample Her Corpse at Funeral in India.” The Independent, 13 June 2022, https://www.independent.co.uk/asia/india/elephant-kills-woman-india-tramples-corpse-b2099464.html.

“Elephant Kills Woman and Returns to Her Funeral to Attack Her Corpse.” FOX 26 Houston, 17 June 2022, https://www.fox13news.com/news/elephant-kills-indian-woman-and-returns-to-her-funeral-to-attack-her-corpse.

Jabr, Ferris. “The Science Is In: Elephants Are Even Smarter Than We Realized [Video].” Scientific American, https://www.scientificamerican.com/article/the-science-is-in-elephants-are-even-smarter-than-we-realized-video/. Accessed 20 June 2022.