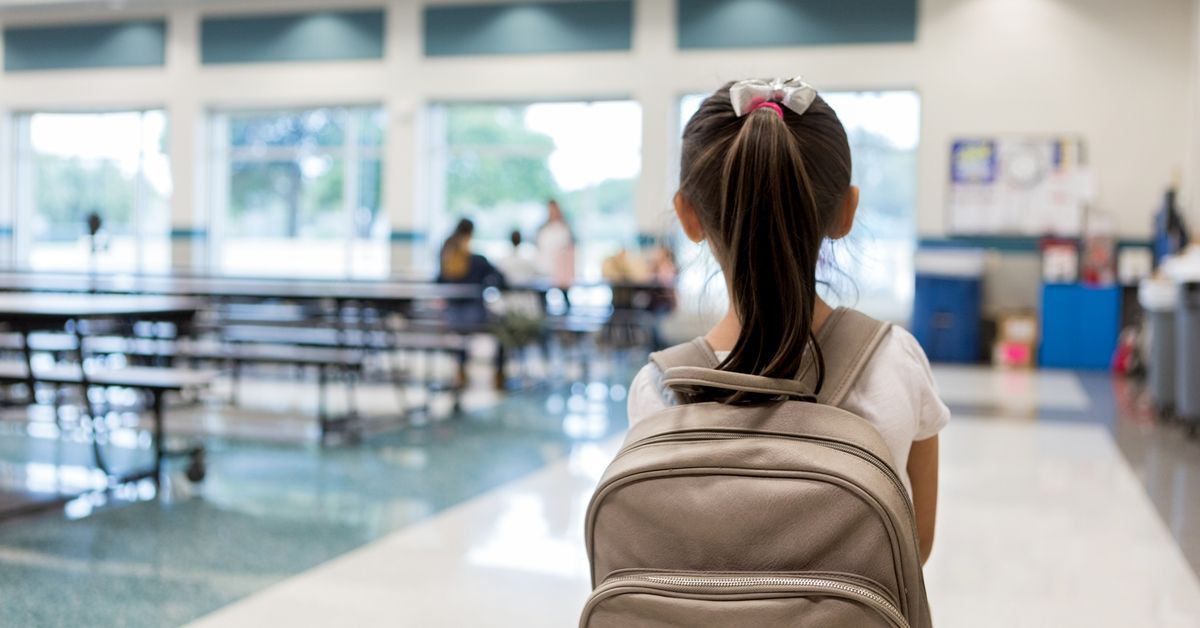 Elementary schoolgirl enters the school cafeteria. She pauses while looking for a friend. (Image Via Stock Photo/Getty Images)

The mother of a 6-year-old boy who was accidentally given floor sealant instead of milk while attending a summer daycare program told Snopes that she was not notified of the incident until several hours after it occurred.

Molly Zaleski’s son attends the summer daycare program Sít’ Eetí Shaanáx – Glacier Valley School in Juneau, Alaska. During a normally scheduled meal time, at least 12 students and two teachers were given cups filled with a substance that resembled milk around 8:45 a.m. on June 15, reported local radio station KTOO. Zaleski told Snopes that she was not notified of the incident until after she picked her son up around noon that same day.

“I’ve been seeing a bunch of articles around and they’re saying things like, parents were contacted immediately or after poison control and I’m just like — oh, were we? Because that’s not my experience,” she told Snopes. “I went to pick him up after his half day. It was then that I was told that he had something this morning and if he throws up three times, I needed to bring him to the hospital.

Zaleski’s child attends the program with other kids between 5 and 12 during the summer months. Some of the children reported burning sensations in their mouth and throats, and the parents of at least one child reportedly sought medical treatment at a hospital.

“He said that on the first sip, he felt it burning on his tongue. He did this face where he was sticking his tongue out and trying to wipe it off with his hands, and he said that the kid who was sitting across the table from him did the same thing. He did have a tummy ache but thankfully, the first sip he knew something was wrong,” said Zaleski.

The three hours, she added, is “a big delay.” Zaleski said that school personnel told her that after consulting poison control, her son was monitored and made to stay upright for an hour.

“He had an upset stomach, but he was more upset about not being able to go outside and play,” she added. “They monitored him for a full hour and within that time, nobody thought to call the parents. It’s crazy to me.”

According to KTOO, the sealant was a product called Hillyard Seal 341, and as school officials reportedly assured parents, its safety data sheet notes that it is “expected to be a low ingestion hazard.” Seal 341 is described as white with a “milky emulsion” and without a noticeable scent.

The next day, The Associated Press published more details concerning the incident, noting that officials don’t believe that there is any criminal or bad intent at this point, but that they “want a thorough investigation of what happened, how it happened.” Food items are reportedly delivered by a food servicing contractor and served by school staff. Milk comes in a plastic bag that is housed in a cardboard box and put into a dispenser to serve with meals. Both the milk and the sealant are typically stored at a district commodity storage site off campus, and it appears that the sealant was transferred to the school on the same pallet as the milk pouches. (Zaleski confirmed these details, adding that officials had relayed the above information to her.)

School and contract personnel determined that after looking at the container label, a clear plastic bag of milk placed in a dispenser was the floor sealant.

Snopes contacted Juneau School District Superintendent Bridget Weiss to determine why there was such a delay in notifying parent. We did not receive a response to our specific question, but were told the Juneau Board of Education held a meeting on June 17 to discuss the "tragedy" involving the food services contractor Nana Management Services (NMS). We were sent this statement:

Some students returned to [the after school program] RALLY and other students have not. Student health and safety is the top priority of the Juneau School District and NMS, and we are actively working to identify and implement additional safety controls and ways to regain public trust.

NMS has reinforced protocols for food service workers that include a sip/taste before serving food or poured beverages provided by NMS staff. Additional new protocols/corrective steps will be reviewed by the State of Alaska Department of Environmental Conservation (DEC) Food Safety and Sanitation Office. DEC is conducting an investigation and may have further recommendations for ongoing operations.

The Juneau School District is committed to implementing all changes necessary to reassure children and families and regain trust moving forward. This includes our communication protocols. The District also takes its communications protocols seriously and I as Superintendent apologizes for the delays that regretfully occurred on Tuesday, June14th. As we learn more about what happened during this event, both in food service and in the communication that day, we will continue to improve.​

KTOO reported that at a previously scheduled Board of Education meeting, Weiss confirmed that the incident was under investigation and that the Juneau Police Department was involved.

“We don’t know how that happened, but they were all put on the same pallet,” Weiss reportedly said. “That pallet was delivered, and the assumption was that it was milk because that’s what we thought was being delivered.”

We also contacted the Juneau Police Department (JPD) for an update in the ongoing investigation. Special Operations Lieutenant Krag Campbell confirmed that an investigation is active and ongoing.

"As standard for ongoing investigations, we won’t be able to release information until it has concluded," added Campbell. "JPD will strive to provide an update on the investigation when it becomes available."

Zaleski expressed concern over the lag in communication, noting that she didn’t hear from the superintendent until 8 p.m. the night of the incident and that officials were “trying to downplay” the accidental ingestion.

"The toxicity of the substance is a concern and I’m thankful that the kids didn’t get sicker than they did, but that’s not part of the problem. Part of the problem is that they were served something they weren’t supposed to ingest and then we weren’t told about it,” she added.

“I told the city investigator, ‘Bear Grylls [host of the television show "Man vs. Wild"] drinks his own pee all the time. It doesn’t mean that I want people serving up urine as if it was lemonade.’”

Even so, Zaleski added that the program is beneficial to students and despite the mishap, her son will continue attending the program at least until the end of the month.

Update [June 17, 2022]: Article was updated to include a statement from the Juneau School District.