The screed mentioned the "Great Replacement Theory," a white supremacist narrative that has also found footing on Fox News. 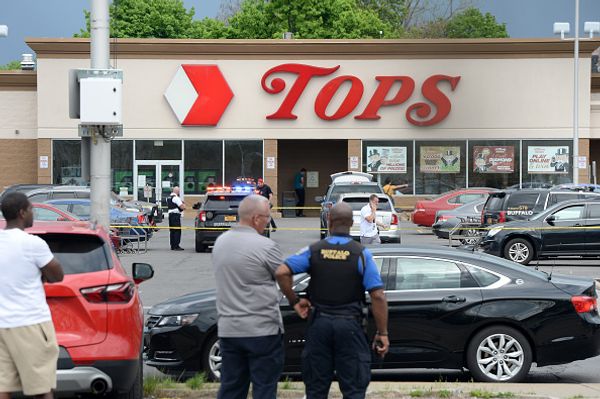 On May 14, 2022, an allegedly racially motivated mass shooting left 10 people dead at a shopping market in Buffalo, New York. In the aftermath, many pointed out that a lengthy piece of text supposedly written by the suspect had discussed the "Great Replacement Theory," a white supremacist narrative that has gained traction among some GOP officials and Fox News hosts. In an apparent attempt to deflect criticism of Fox News, Donald Trump Jr., among others, claimed that the killer had also explicitly attacked Fox News in his screed. Did the suspect attack Fox News in the screed? Have Tucker Carlson and Fox News discussed the Great Replacement Theory? Here's what we were able to find out.

The Great Replacement Theory is a racist ideology that argues white people are losing their rightful place of power in the world as they are replaced by minorities. White supremacists often argue that the white race is under threat of extinction and that minorities are planning a white genocide.

In short, the "Great Replacement" is a conspiracy theory that states that non-white individuals are being brought into the United States and other Western countries to "replace" white voters to achieve a political agenda. It is often touted by anti-immigration groups, white supremacists and others, according to the National Immigration Forum.

White supremacists argue that the influx of immigrants, people of color more specifically, will lead to the extinction of the white race.

Did Buffalo Shooting Suspect Subscribe to the Great Replacement Theory?

Two days before the shooting, 18-year-old Payton Gendron reportedly shared a rambling 180-page PDF in Google Docs that laid out an argument for a racist attack. Throughout the document, Gendron, who had the N-word scrawled across his rifle, repeatedly cites the "great replacement" conspiracy theory as the driving ideology.

The manifesto includes dozens of pages of antisemitic and racist memes, repeatedly citing the racist “great replacement” conspiracy theory frequently pushed by white supremacists, which falsely claims white people are being “replaced” in America as part of an elaborate Jewish conspiracy theory. Other memes use tropes and discredited data to denigrate the intelligence of nonwhite people ... The document also claims “critical race theory,” a recent right-wing talking point that has come to generally encompass teaching about race in school, is part of a Jewish plot, and a reason to justify mass killings of Jews.

At the heart of the document is Gendron's belief in the racist theory that whites are in danger of being replaced by non-whites, who must be removed from this country or slaughtered. Blacks and Jews draw most of Gendron's vitriol in the manifesto.

"We are seeing an entire generation of young people being radicalized by the internet," said Mark Potok, a senior fellow at the Centre for Analysis of the Radical Right and a former longtime leader at the Southern Poverty Law Center.

While the replacement theory was once confined to white supremacist circles, it has recently entered the mainstream as it has repeatedly been discussed by Fox News host Tucker Carlson. Some GOP officials, such as Matt Gaetz and Elise Stefanik, have also pushed this ideology.

No public figure has promoted replacement theory more loudly or relentlessly than the Fox host Tucker Carlson, who has made elite-led demographic change a central theme of his show since joining Fox’s prime-time lineup in 2016. A Times investigation published this month showed that in more than 400 episodes of his show, Mr. Carlson has amplified the notion that Democratic politicians and other assorted elites want to force demographic change through immigration, and his producers sometimes scoured his show’s raw material from the same dark corners of the internet that the Buffalo suspect did.

As reporters noted the connections between the suspected shooter's screed and the replacement talking points heard on Fox News, some came to the network's defense and claimed that the suspect had explicitly attacked Fox News in his manifesto.

This claim was based on an image graphic featuring headshots of various Fox News personalities (Carlson was not included), each of which was stamped with a Jewish star. The graphic was posted next to similar pieces of media that featured the employees of CNN, The New York Times, NBC News, CBS News, and NPR.

But the suspect did not attack Fox News for its editorial coverage. Rather, the attack was related to the anti-Semitic notion that Jewish people run all news media. Not only is this false, but it is rooted in long-running, anti-Semitic conspiracy theories holding that Jewish people control the banks, the media, and the world in general. The ADL writes:

Jews account for approximately 0.2 percent of the global population. And yet antisemites believe that this tiny minority is not only on a quest for total world domination, but is already in control of banks, the media, industry, government — even the weather.

This is the only time Fox News is mentioned in the screed.

Was the Shooter Radicalized by Fox News?

While the suspect subscribed to the replacement theory, and while this theory has been promoted by Fox News, there's no evidence that the suspect frequently watched Carlson's program (or other Fox News shows).

The Washington Post reported that the suspect appeared to have been radicalized online, not via cable news.

Before the shooting rampage that also left three wounded, the suspect, Payton S. Gendron, 18, allegedly posted a lengthy document invoking the idea that White Americans were at risk of being “replaced” by people of color because of immigration and higher birthrates.

Gendron, who is White, allegedly indicated that he chose a neighborhood with a large number of Black residents for his alleged attack. In the document that Gendron is suspected to have written, he indicated that he was radicalized online. There’s no indication that he watched Carlson’s program.

The theory was once confined to far-right White extremists, who cast immigration as part of a plot by “elites” to take political and economic power away from White people. It has gained broader circulation in recent years as a talking point among prominent conservative media figures.

Confessore, Nicholas, and Karen Yourish. “A Fringe Conspiracy Theory, Fostered Online, Is Refashioned by the G.O.P.” The New York Times, 16 May 2022. NYTimes.com, https://www.nytimes.com/2022/05/15/us/replacement-theory-shooting-tucker-carlson.html.

Danner, Chas. “What We Know About the Buffalo Supermarket Attack.” Intelligencer, 16 May 2022, https://nymag.com/intelligencer/2022/05/ten-dead-after-gunman-attacks-buffalo-supermarket-updates.html.

Luscombe, Richard. “Scrutiny of Republicans Who Embrace ‘Great Replacement Theory’ after Buffalo Massacre.” The Guardian, 16 May 2022. The Guardian, https://www.theguardian.com/us-news/2022/may/16/buffalo-massacre-great-replacement-theory-republicans.

“‘The Great Replacement:’ An Explainer.” Anti-Defamation League, https://www.adl.org/resources/backgrounders/the-great-replacement-an-explainer. Accessed 16 May 2022.