Were Most Conservative Supreme Court Justices Appointed by Presidents Who Lost Popular Vote?

And were they confirmed by Senators who represented a minority of Americans? 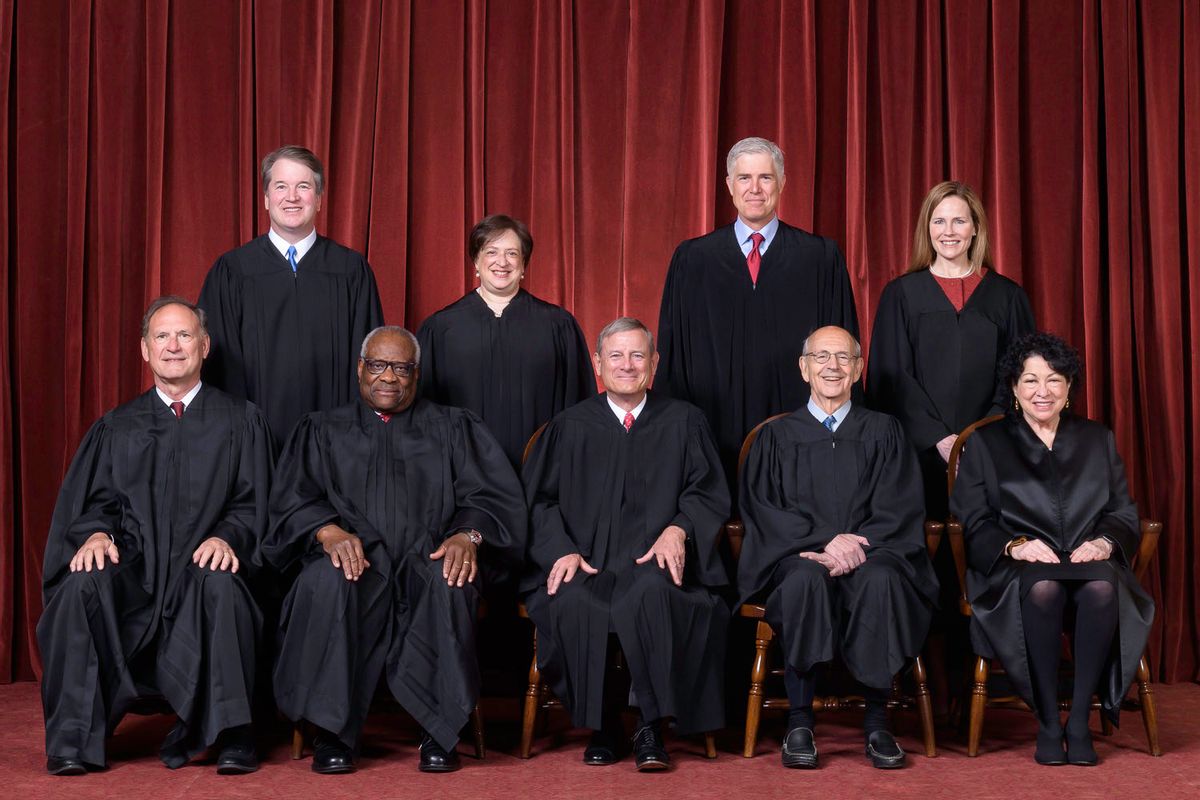 Image Via Fred Schilling, Collection of the Supreme Court of the United States/Wikimedia Commons

After Politico leaked a draft U.S. Supreme Court opinion in May 2022 that voted to strike down the landmark Roe v. Wade abortion decision, the appointment of Supreme Court justices and their place in the democratic process came under scrutiny. Numerous commentators made the claim that most of the conservative justices were appointed by Republicans who did not represent the majority of Americans.

Not all of the elements of the above claim are true, so we will break down the current conservative Supreme Court justices' appointments, beginning with the Republican president who nominated them, followed by the Senate that voted to confirm them.

We should note before diving into each justice that the above tweet stems from criticisms of the way the Electoral College impacts presidential elections, and the way the U.S. Senate represents states over populations. In a presidential election, the president is not just elected by popular vote but through the Electoral College — a convoluted system that sometimes does not mirror the choice of the majority of American voters.

According to the Brennan Center for Justice, the Electoral College, “is a group of inter­me­di­ar­ies desig­nated by the Consti­tu­tion to select the pres­id­ent and vice pres­id­ent of the United States. Each of the 50 states is alloc­ated pres­id­en­tial elect­ors equal to the number of its repres­ent­at­ives and senat­ors.” The Elect­oral College comprises 538 members, and a pres­id­en­tial candid­ate must win at least 270 of their votes in order to win the elec­tion. So a presidential winner can conceivably lose the popular vote but win the Electoral College vote — it has happened five times in U.S. history.

The U.S. Senate is made up of 100 senators, two for each state, regardless of the population of the state. In recent decades, Democrats have complained that the system is sliding toward partisan minority rule, in which even though Republicans have a majority of seats in the Senate, they represent a smaller proportion of the U.S. population. According to an analysis by Vox that relied on 2019 U.S. Census population data, even though the Senate is evenly split between parties, Democrats represent 41.5 million more people in the country than Republicans do. Currently, Democratic Vice President Kamala Harris has the tie-breaking vote in the Senate.

Conservatives argue that the Senate's composition is meant to protect the rights of smaller states, but Democrats say that it means a party representing a shrinking number of voters can block a lot of major legislation. Today, states that are largely Democrat, like California, have a population much larger than, say, the state of Wyoming, which is Republican. Yet both get the same number of seats in the Senate.

The systemic challenges detailed above mean that the nomination process for Supreme Court justices has not always been representative of what the people across the country want, as the tweet claims. But does the above tweet give us the full picture? Let's take a look at all six conservative justices:

Thomas was nominated to the Supreme Court in 1991 by President George H.W. Bush, who won the popular vote and the electoral college votes, according to Ballotpedia.

We calculated the proportion of the population represented by the Senators who voted to confirm Thomas, using data from the 1990 U.S. Census, and found it was 48.6 percent.

A Washington Post analysis mirrors our calculations: “Thomas was nominated by a president who won his seat handily but confirmed by a Senate representing a minority of the popular will and a minority of the population.” This tracks with an analysis published in the Chicago-Kent Law Review by Kevin J. McMahon, professor of political science at Trinity College, calculating that Thomas was nominated with the support of Senators who received only 48.33 percent of the popular vote.

Govtrack, however, states, the “Yea votes represented 50% of the country’s population by apportioning each state’s population to its voting senators.” We reached out to Govtrack, and were directed to the data published by the Federal Reserve Bank of St. Louis, based on the Census Bureau's Population Estimates Program (PEP) from 1991, which has different statistics and explains the difference in our calculations.

Like Roberts, Alito was nominated by the younger Bush in 2006, after Bush’s 2004 election victory in which he also won the popular vote.

We calculated the number of "Yea" votes in the Senate that year using U.S. Census data from 2000, and found that almost half of the population was represented by those Senators, at 49.8 percent. However, when we recalculated using ACS estimates from 2006, the number was closer to 52 percent, which aligns with Govtrack data. Again, Govtrack relied on the Census PEP estimates for the calculations.

Other sources appear to contradict Govtrack data, though. A Washington Post analysis states: “For Alito, the votes he received came from senators representing 49.8 percent of the country (assigning half of a state’s population to each of its senator).”

McMahon argues in his academic paper that, “In securing confirmation to the High Court, Samuel Alito also did so with a majority of senators who had garnered fewer votes than those in opposition.”

All three of the justices were nominated by former U.S. President Donald Trump, who lost the popular vote by millions, but won the electoral college vote by a large margin. They were also confirmed by a Republican-controlled Senate during the Trump administration.

During those years, based on data from FiveThirtyEight and collected by left-of-center think tank New America’s senior fellow Lee Drutman, the GOP held a majority, but represented a minority. After 2015, the Republicans consistently held more than 50 percent of seats, but represented a population of around 46-48 percent of the country.

This was reflected in the votes confirming the justices. In 2017, Gorsuch was confirmed by Senate votes representing 47 percent of the population, including the three Democratic senators who voted in his favor, according to Govtrack, which relied on Census PEP estimates. We made our own calculations using annual estimates of the population in 2017 and found the number to be closer to 44 percent, but still representing a minority of the American public.

In 2018 Kavanaugh, was confirmed with "Yea" votes representing 44 percent of the country’s population, including only one Democratic vote in his favor, according to Govtrack. Our calculations mirrored Govtrack's estimate.

And finally in 2020 Coney Barrett was confirmed with "Yea" votes representing 48 percent of the country’s population, excluding one Republican "Nay" vote, according to Govtrack. Our calculations relying on 2020 census data mirrored Govtrack's estimate.

The overall control of the Senate did not change during the Trump era, while population estimates varied on a yearly basis. But the GOP-controlled Senate consistently represented a smaller percentage of the population than the opposition. The votes for Supreme Court justices were also clearly divided along partisan lines with only a few exceptions.

“Analysis | Senators Representing Less than Half the U.S. Are about to Confirm a Nominee Opposed by Most Americans.” Washington Post. www.washingtonpost.com, https://www.washingtonpost.com/politics/2018/10/06/senators-representing-less-than-half-us-are-about-confirm-nominee-opposed-by-most-americans/. Accessed 6 May 2022.

“Has a US Supreme Court Opinion Never Been Leaked in Advance Before?” Snopes.Com, https://www.snopes.com/fact-check/supreme-court-draft-opinion-leak/. Accessed 6 May 2022.

Roos, Dave. “5 Presidents Who Lost the Popular Vote But Won the Election.” HISTORY, https://www.history.com/news/presidents-electoral-college-popular-vote. Accessed 6 May 2022.

“The Legislative Branch.” The White House, https://www.whitehouse.gov/about-the-white-house/our-government/the-legislative-branch/. Accessed 6 May 2022.