More than 400 Ukrainians civilians were massacred in Bucha by the Russian military, regardless of whether one building still had windows. 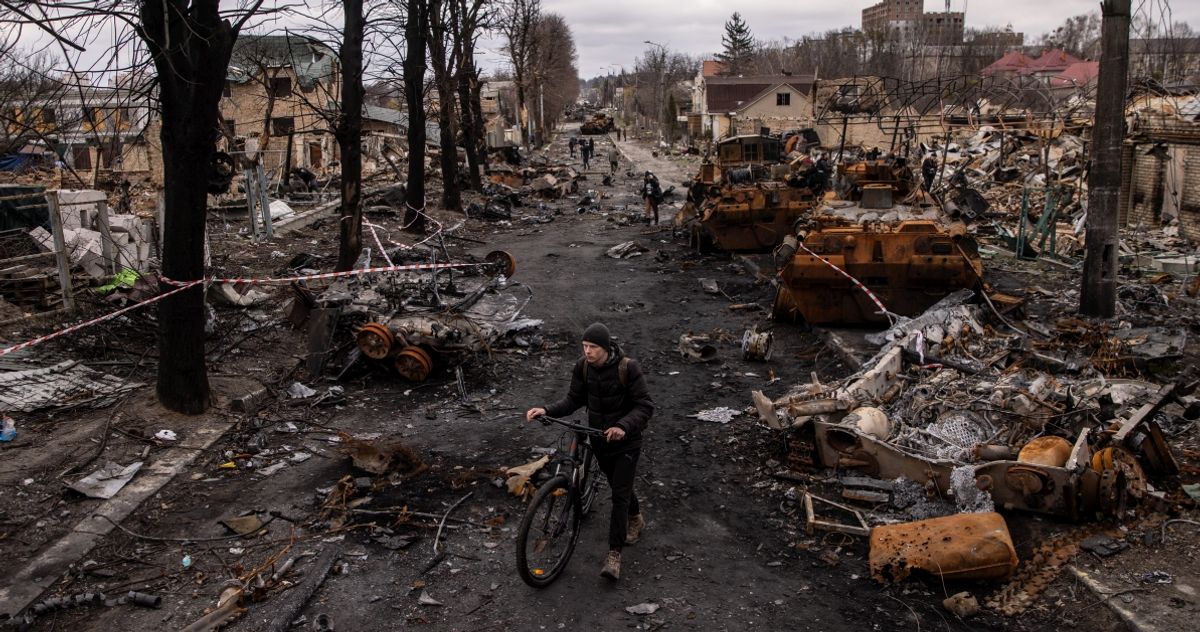 Since the start of Russia's attack on Ukraine in February 2022, numerous rumors have circulated in an attempt to downplay the horrors of the conflict. A behind-the-scenes video from a movie being filmed in England in 2013, for example, was shared with the false claim that it showed Ukrainians "staging" an attack.

In April 2022, shortly after the details of the Bucha massacre were revealed, another specious rumor was circulated to claim that this tragic event, in which more than 400 Ukrainian citizens were killed, had been staged. The evidence for this claim? A photograph that supposedly showed impossibly strong "Ukrainian windows" next to the site of an explosion that overturned three vehicles: While this photograph is real, the vehicles pictured were not overturned by an explosion. Furthermore, while the picture shows a building with intact windows, this is not the only image showing the aftermath of Russia's attack on Bucha. Additional ones show mass destruction in the city where entire buildings (windows and all) were destroyed.

The photograph in question was taken on April 4, 2022, in Bucha, Ukraine, by Rodrigo Abd. It's available via The Associated Press, with the caption:

A Ukrainian soldier walks with children passing destroyed cars due to the war against Russia, in Bucha, on the outskirts of Kyiv, Ukraine, Monday, April 4, 2022. Local authorities told The Associated Press that at least 16 children were among the hundreds of people killed in Bucha.

Were the Cars Flipped Over by An Explosion?

This claim that the Bucha Massacre was staged is based on the notion that the building's windows should have been shattered because this was allegedly the site of a powerful explosion that overturned cars. However, these cars were not overturned by an explosion.

While some may be under the impression that the Bucha Massacre was the result of a single bombing, this Ukrainian town was occupied by Russian forces for weeks. During this occupation, Ukrainian civilians were tortured, raped, and murdered.

Eyewitness reports state that the Russian military used tanks and trucks to overturn some vehicles throughout Bucha. This may have been done in an attempt to hide Russia's equipment, to create barricades, or to simply prevent Ukrainian citizens from fleeing the area.

"At the place where I took my photo, in the town of Bucha [sic], I met several citizens and everyone told me that the cars had been overturned by Russians with tanks, but they did not know why the Russians did this."

Other Photographs of Bucha Destruction

The viral picture of "Ukrainian windows" is not the only image to show the death and destruction that took place in Bucha. Even if some believe this specific photograph to be suspicious for some reason, dozens of other photographs and videos from Bucha show the streets lined with the dead bodies of Ukrainian civilians and buildings that were destroyed.

This isn't the first time that claims have circulated that the Bucha massacre had been staged. In fact, after reports were first circulated about a mass killing in Ukraine, Russia’s Ministry of Defense suggested that the bodies on the ground were placed there after Russian forces left the area. This claim has been debunked by satellite images and first-person accounts.

When images emerged over the weekend of the bodies of dead civilians lying on the streets of Bucha — some with their hands bound, some with gunshot wounds to the head — Russia’s Ministry of Defense denied responsibility. In a Telegram post on Sunday, the ministry suggested that the bodies had been recently placed on the streets after “all Russian units withdrew completely from Bucha” around March 30.

Russia claimed that the images were “another hoax” and called for an emergency U.N. Security Council meeting on what it called “provocations of Ukrainian radicals” in Bucha.

But a review of videos and satellite imagery by The Times shows that many of the civilians were killed more than three weeks ago, when Russia’s military was in control of the town.

Gardner, Simon. “Death and Defiance in a Bucha Neighbourhood That Was Held by Russian Troops.” Reuters, 7 Apr. 2022. www.reuters.com, https://www.reuters.com/world/europe/death-defiance-bucha-neighbourhood-that-was-held-by-russian-troops-2022-04-07/.

Perdikopoulos, Athanasios. “Misleading Presentation of a Photo by Boutsa as a Alleged Revelation of Misinformation from Pro-Ukrainian Sources.” Ellinika Hoaxes, 20 Apr. 2022, https://www.ellinikahoaxes.gr/2022/04/20/bucha-photo-damaged-cars-ukrainian-propaganda-misinformation/.