Shanghai has been under lockdown due to a COVID-19 surge. 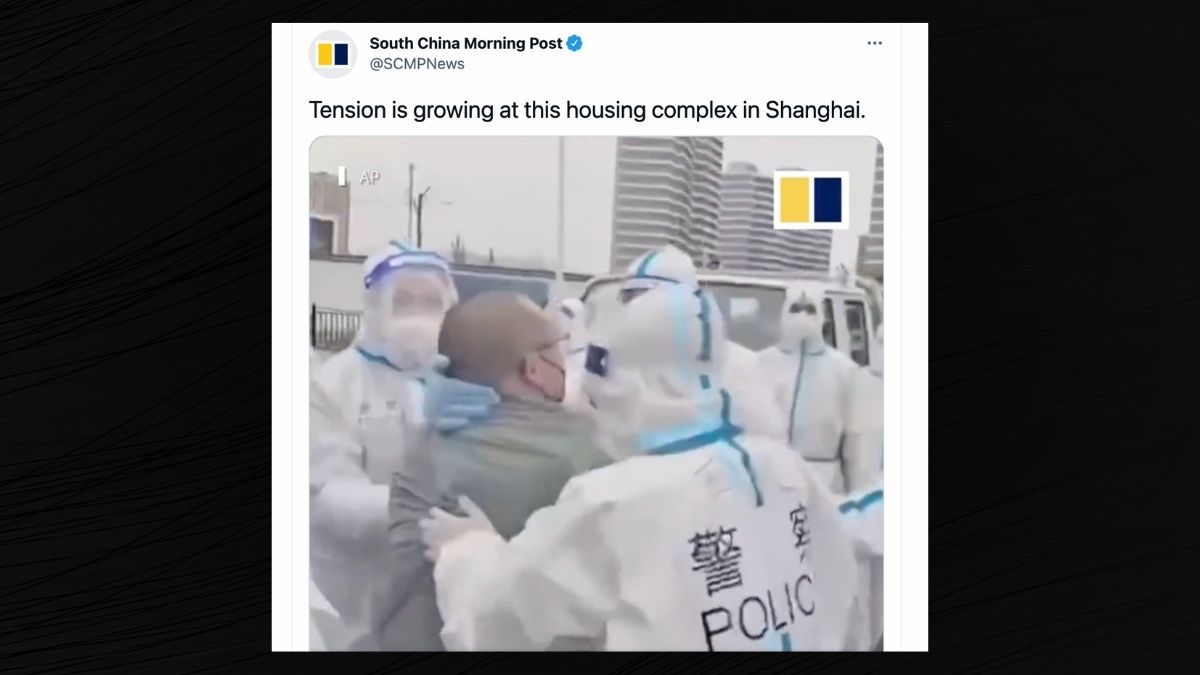 In mid-April 2022, various social media users shared videos of authorities taking people into custody while wearing white hazmat suits with "POLICE" written in English and Chinese characters on the back of the suits.

From various angles, the videos show the police scuffling with people, and contain text indicating the conflict was over the Chinese government's seizing Shanghai residents' homes to use for quarantine amid a COVID-19 surge there. An example of one the videos circulating was posted to Twitter on April 14, 2022, by the English-language newspaper South China Morning Post:

News articles in various reputable English-language news outlets appear to corroborate the videos, reporting that the videos depict residents demonstrating against both being forcibly evicted from their homes to make way for quarantined COVID-19 patients, and against infected people being moved in so close to where they live.

Reuters, for example, reported that the protest and arrests were originally livestreamed on the Chinese messaging platform WeChat, and seen by about 10,000 people before the stream was cut, with the platform telling viewers the stream contained "dangerous content."

Reuters quoted an unnamed woman who filmed the incident as stating, "It's not that I don't want to cooperate with the country, but how would you feel if you live in a building where the blocks are only 10 metres (30 feet) apart, everyone has tested negative, and these people are allowed in?"

Reuters also noted that the building's management company confirmed that the events did take place:

The Zhangjiang Group, which owns the compound, said authorities had converted five of its vacant buildings into isolation facilities and it had been advised a further nine buildings would be converted.

It said it had moved 39 rental tenants to rooms in other parts of the compound and had offered them compensation.

China is experiencing a surge in COVID-19 cases, with news reports describing it as the worst surge since the first outbreak of the virus in Wuhan in the winter of 2019. A harsh lockdown in Shanghai, where the incident depicted in the video above took place, has left residents trapped in their homes with reports that they don't have enough to eat.