A post from 2014 about the supposed origins of the military melody known as "Taps" recently received a massive surge of shares. 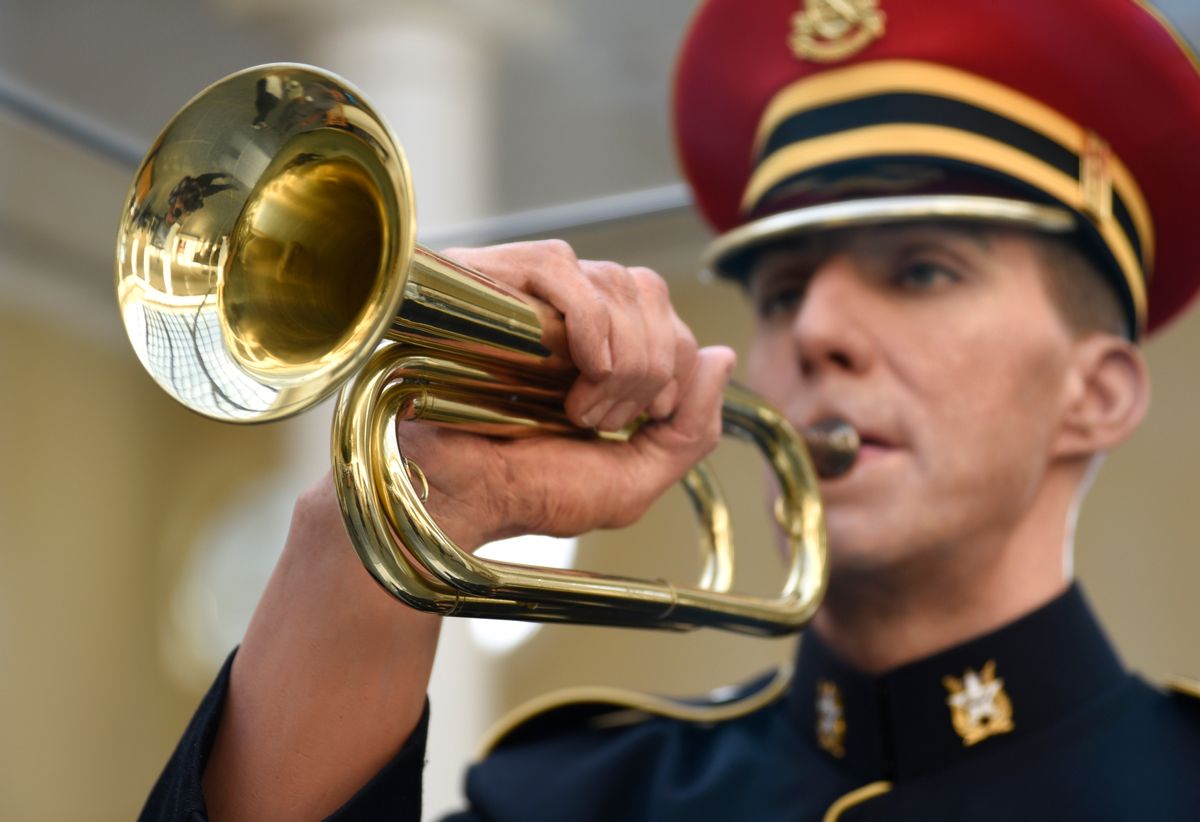 A viral and false Facebook post from 2014 about the origins of the military's bugle melody known as "Taps" is receiving a new surge of shares. The old post tells a fabricated Civil War story of a Union Army captain finding the composition for "Taps" in his dead son's Confederate Army uniform. This is false, just as we published in our original fact check back in 2008.

According to Google Trends, readers who saw the post on Facebook this week searched on Google for "how did 'Taps' originate," "who wrote 'Taps' and why," "history of 'Taps' lyrics," and "the story behind 'Taps.'"

The post was originally created on April 5, 2014. It likely went viral in April 2022 due to it being the anniversary of the post. It's unclear why its eighth anniversary was the magic one where its shares skyrocketed from around 100,000 on April 10 to nearly 400,000 total by April 12:

The post with the fabricated story read as follows:

If any of you have ever been to a military funeral in which taps was played; this brings out a new meaning of it.

Here is something Every American should know.

We in the United States have all heard the haunting song, 'Taps...' It's the song that gives us the lump in our throats and usually tears in our eyes.

But, do you know the story behind the song? If not, I think you will be interested to find out about its humble beginnings.

Reportedly, it all began in 1862 during the Civil War, when Union Army Captain Robert Elli was with his men near Harrison's Landing in Virginia . The Confederate Army was on the other side of the narrow strip of land.

During the night, Captain Elli heard the moans of a soldier who lay severely wounded on the field. Not knowing if it was a Union or Confederate soldier, the Captain decided to risk his life and bring the stricken man back for medical attention. Crawling on his stomach through the gunfire, the Captain reached the stricken soldier and began pulling him toward his encampment..
When the Captain finally reached his own lines, he discovered it was actually a Confederate soldier, but the soldier was dead.

The Captain lit a lantern and suddenly caught his breath and went numb with shock. In the dim light, he saw the face of the soldier. It was his own son. The boy had been studying music in the South when the war broke out. Without telling his father, the boy enlisted in the Confederate Army.

The following morning, heartbroken, the father asked permission of his superiors to give his son a full military burial, despite his enemy status. His request was only partially granted.
The Captain had asked if he could have a group of Army band members play a funeral dirge for his son at the funeral.

The request was turned down since the soldier was a Confederate.

But, out of respect for the father, they did say they could give him only one musician.

The Captain chose a bugler. He asked the bugler to play a series of musical notes he had found on a piece of paper in the pocket of the dead youth's uniform.

This wish was granted.

The haunting melody, we now know as 'Taps' used at military funerals was born.

Day is done.
Gone the sun.
From the lakes
From the hills.
From the sky.
All is well.
Safely rest.
God is nigh.

Fading light.
Dims the sight.
And a star.
Gems the sky.
Gleaming bright.
From afar.
Drawing nigh.
Falls the night.

I too have felt the chills while listening to 'Taps' but I have never seen all the words to the song until now. I didn't even know there was more than one verse. I also never knew the story behind the song and I didn't know if you had either so I thought I'd pass it along.

I now have an even deeper respect for the song than I did before.

Remember Those Lost and Harmed While Serving Their Country.

Also Remember Those Who Have Served And Returned; and for those presently serving in the Armed Forces.

Please send this on after a short prayer.

Make this a Prayer wheel for our soldiers ... please don't break it.

In 2020, USA Today reported that the fake "Taps" origin story "first appeared in a 1949 television program for a short-lived 'Ripley's Believe it or Not' program." It has since been spread in many forms and lived on to see the days of social media.

We covered the true origins of "Taps" back in our own article in 2008, as have many other publications. A previous White House administration even republished the real story from an article by a bugler at Arlington National Cemetery. It read as follows:

Of all the military bugle calls, none is so easily recognized or more apt to render emotion than "Taps." Up to the Civil War, the traditional call at day's end was a tune borrowed from the French called "Lights Out". In July of 1862, in the aftermath of the bloody Seven Days battles, hard on the loss of 600 men and wounded himself, Union General Daniel Adams Butterfield called the brigade bugler to his tent. He thought "Lights Out" was too formal and he wished to honor his men.

Oliver Wilcox Norton, the bugler, tells the story, "…showing me some notes on a staff written in pencil on the back of an envelope, [he] asked me to sound them on my bugle. I did this several times, playing the music as written. He changed it somewhat, lengthening some notes and shortening others, but retaining the melody as he first gave it to me. After getting it to his satisfaction, he directed me to sound that call for 'Taps' thereafter in place of the regulation call. The music was beautiful on that still summer night and was heard far beyond the limits of our Brigade. The next day, I was visited by several buglers from neighboring Brigades, asking for copies of the music, which I gladly furnished. The call was gradually taken up through the Army of the Potomac."

This more emotive and powerful "Taps" was soon adopted throughout the military. In 1874, it was officially recognized by the U.S. Army. It became mandatory at military funeral ceremonies in 1891. There is something singularly beautiful and appropriate in the music of this wonderful call. Its strains are melancholy, yet full of rest and peace. Its echoes linger in the heart long after its tones have ceased to vibrate in the air.

-from an article by Master Sergeant Jari A. Villanueva, USAF

Villanueva, the servicemember mentioned at the end of the article, was once profiled on Air Force TV:

It's unclear just how high the share count might get on the viral and false post about the origins of "Taps." A gain of nearly 300,000 additional shares over the course of just the last two days showed that it might soon be on track to hit the million mark.