Just days away from Easter Sunday, we contacted Ferrero about its recent Kinder chocolate recall to find the truth behind a viral Facebook post that mentions maggots and salmonella. 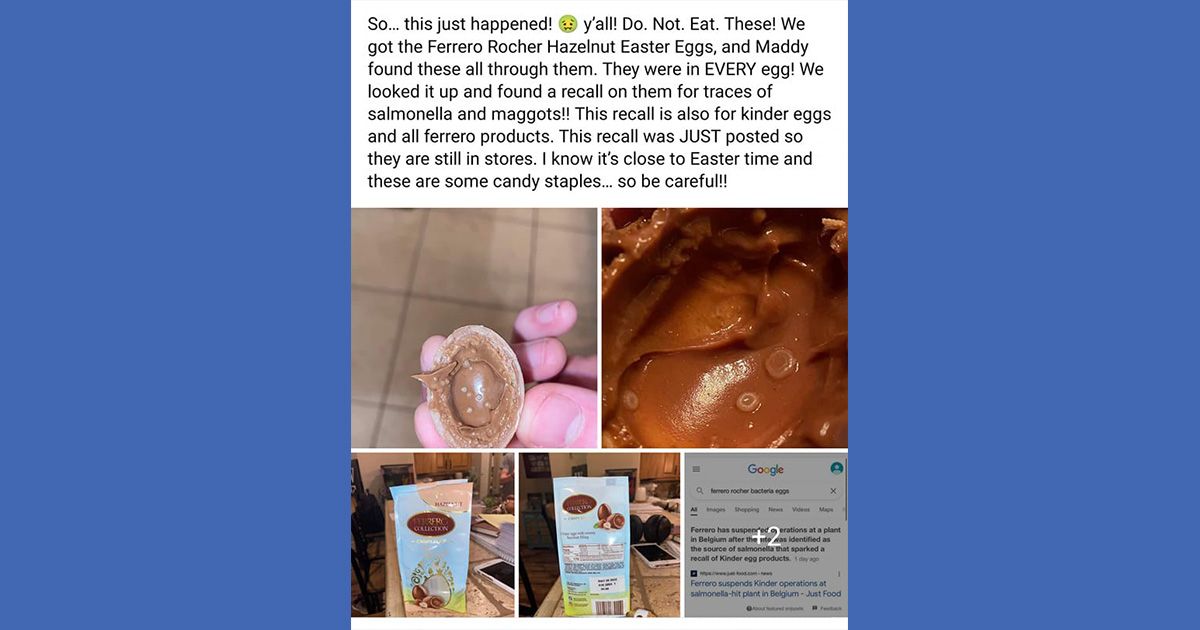 The Ferrero chocolate and confectionery company recently announced a recall of some of its Kinder products due to an outbreak of salmonella. The new recall as well as old internet rumors appeared to have combined forces to fuel a viral Facebook post that's being copied and pasted as copypasta. These posts pushed misleading rumors that said pictures showed maggots and worms in both Kinder chocolate eggs and a product described in the reposts as "Ferrero Rocher Hazelnut Easter Eggs."

By email, a Ferrero company spokesperson said that the only reason a recall had been issued was because of salmonella, not maggots or worms. "The photo in the post does not look like any infestation," they said. "It looks to be granini, a term for sugar and oil congealing when the product undergoes temperature changes. Depending upon the temperature at which the product was stored, the oils and sugar can separate and then solidify giving the appearance of white spots throughout the spread."

Further, the company confirmed to us that the product shown in the Facebook reposts was not part of any recall.

Here are the facts. The Facebook post in question appeared to have been first shared earlier this month. The real name of the product that was pictured in the original post and the reposts was Ferrero Collection Hazelnut Crispy Eggs, not "Ferrero Rocher Hazelnut Easter Eggs."

One repost read as follows:

So… this just happened! ? y’all! Do. Not. Eat. These! We got the Ferrero Rocher Hazelnut Easter Eggs, and Maddy found these all through them. They were in EVERY egg! We looked it up and found a recall on them for traces of salmonella and maggots!! This recall is also for kinder eggs and all ferrero products. This recall was JUST posted so they are still in stores. I know it’s close to Easter time and these are some candy staples… so be careful!!

All of this was misleading for various reasons, all of which we document below.

On April 7, Ferrero issued a recall in the U.S. for two specific product assortments due to concerns over salmonella.

A company spokesperson told us: "In the United States, only two products are being recalled: Kinder Happy Moments Chocolate Assortment, distributed only at BJ’s Wholesale Club stores and select Costco locations in the Bay Area of California and Northern Nevada; and Kinder Mix Chocolate Treats Confections Assortment Basket distributed in 14 Big Y Supermarket locations, where this product has already been removed from store shelves. We continue to cooperate with the FDA."

The company also included the following about salmonella:

Salmonella is an organism which can cause serious and sometimes fatal infections in young children, frail or elderly people, and others with weakened immune systems. Healthy persons infected with Salmonella often experience fever, diarrhea (which may be bloody), nausea, vomiting and abdominal pain. In rare circumstances, infection with Salmonella can result in the organism getting into the bloodstream and producing more severe illnesses such as arterial infections (i.e., infected aneurysms), endocarditis and arthritis.

On April 8, a notice was issued that showed the recall extended to several other products. However, importantly, these additional chocolates were not recalled in the U.S.:

In the context of the ongoing salmonella investigations taking place in collaboration with food safety authorities, Ferrero is suspending operations at its plant in Arlon, Belgium.

With immediate effect, the entire production of Kinder Surprise, Kinder Mini Eggs, Kinder Surprise Maxi 100g, and Kinder Schokobons made in Arlon is being recalled.

Ferrero acknowledges there were internal inefficiencies, creating delays in retrieving and sharing information in a timely manner. This impacted the speed and effectiveness of the investigations. The plant will only re-open once certified by the authorities.

According to a news release from the company, the issue that caused the salmonella outbreak was found to be "a filter at the outlet of two raw material tanks." It said that food authorities were investigating, the filter had been removed, and that the problem had been resolved.

The key components of this recall, other than the names of the products affected and the fact that these products weren't recalled in the U.S., appeared to be the fact that only one plant was impacted and that it only "accounts for around 7% of total volumes of Kinder products manufactured globally on a yearly basis." These facts were absent from the misleading Facebook reposts.

Also absent from the reposts was a company announcement from Ferrero that detailed special new Easter products for the U.S. that were unaffected by any recall. That announcement was made on the same day as one of the recall notices, perhaps showing just how isolated much of the recall was outside of the U.S.

Now that we've laid out the facts on Ferrero's Kinder recall notices, we can take a look at a few aspects of the viral Facebook reposts that didn't add up.

First, the reposts about Ferrero's Kinder chocolate recall and Ferrero Collection Hazelnut Crispy Eggs mentioned maggots, which led to searches on Google for worms as well. However, as previously mentioned, neither of the two company recall notices said anything about maggots or worms. They only mentioned salmonella. This part of the rumor may have stemmed from users seeing old news articles about misleading and unfounded videos that claimed to show maggots and worms in Ferrero Rocher chocolates.

Second, one of the recall notices mentioned that "the Arlon plant accounts for around 7% of total volumes of Kinder products manufactured globally on a yearly basis." In the Facebook reposts, one of the pictures showed a screenshot of that very same recall on Google. However, one of the other photographs in the reposts showed the back of the package of what the person who took the pictures claimed was contaminated chocolates. That photograph showed, "Made in Italy." This meant that it was not part of these recall notices for chocolates made in the Belgium plant. These two pictures were from the viral Facebook reposts. The recall notices were issued for a Ferrero plant in Belgium. The purportedly contaminated package of chocolates featured in the reposts said it was made in Italy. (Source: Facebook)

Third, Ferrero Collection Hazelnut Crispy Eggs were not impacted by a recall.

Finally, taking into account the aforementioned information provided by a Ferrero company spokesperson, we concluded that the viral reposts on Facebook were misleading, to say the least.

The person who made the original Facebook post eventually deleted it and commented on the removal: "I was forced to delete [it] because people were being ridiculous and calling me a liar and even sending me awful DMs," the user said. "This literally happened to us last night and I was trying to warn my friends and [had] no idea it would go viral."

The user also reported receiving what appeared to be harassing messages about family members on unrelated posts, leading to those being deleted as well.

Even so, the viral and misleading Facebook post that mentioned "Ferrero Rocher Hazelnut Easter Eggs" and maggots continues to be shared in a seemingly countless number of reposts just days away from the Easter holiday on April 17. Many of the reposts are likely private and only visible to friends, so there's no way of knowing just how many times the original post and its pictures have been copied and pasted.

This story will be updated if we receive further information regarding Ferrero products.

Ferrero Group. Ferrero Announces the Temporary Suspension of Operations in Arlon, Belgium, and Extends the Recall of Kinder Products Manufactured in the Plant. 8 Apr. 2022, https://www.prnewswire.com/news-releases/ferrero-announces-the-temporary-suspension-of-operations-in-arlon-belgium-and-extends-the-recall-of-kinder-products-manufactured-in-the-plant-301520841.html. ---.