Sometimes, misinformation wears its heart on its sleeve. 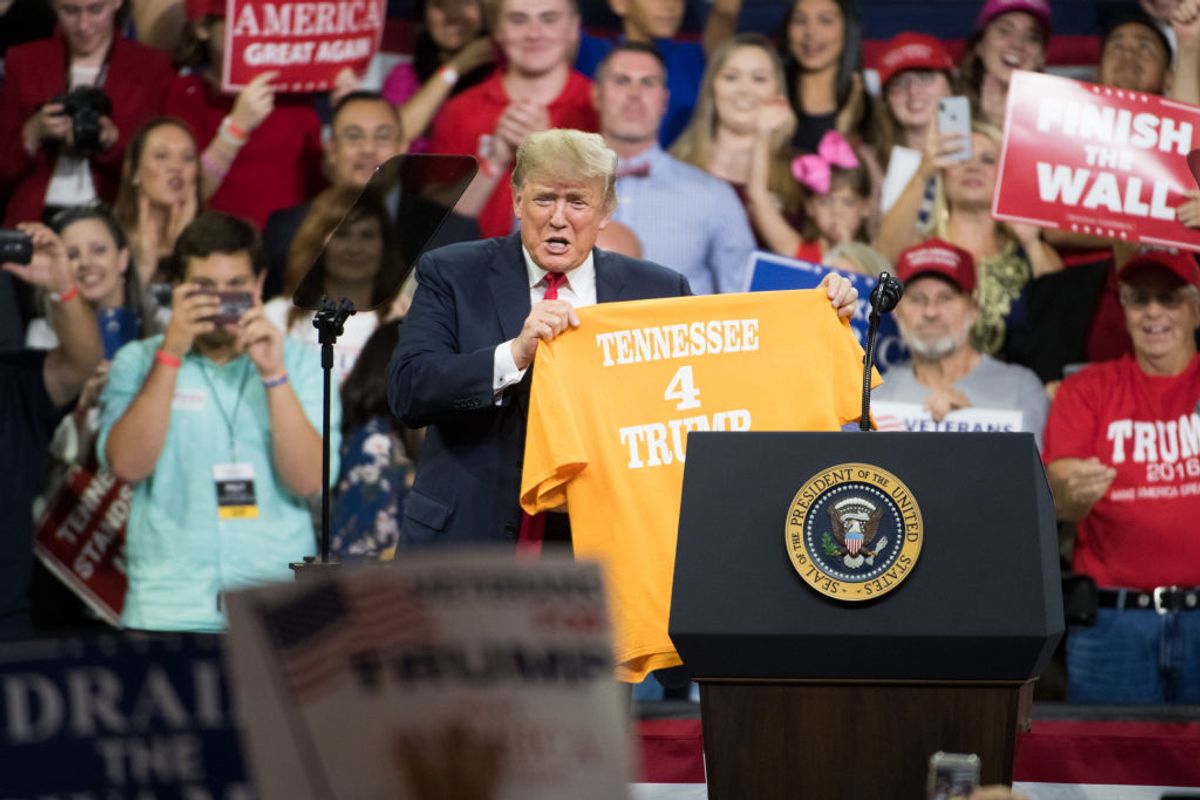 One very common, relatively straightforward misinformation technique that we have observed at Snopes in recent years is the digitally manipulated, phony T-shirt. Using fairly rudimentary digital editing skills, propagandists, pranksters and T-shirt sellers superimpose inflammatory, controversial, or downright silly messages and images on to the shirts or sweatshirts of celebrities and politicians.

In this example from May 2020, the faker takes an authentic picture of former President Donald Trump, former first lady Melania Trump, and their son Barron Trump ... ... and then edits the younger Trump's shirt to include the provocative message "I MISS OBAMA": The danger posed by the "fake T-shirt" genre of misinformation comes mainly from the fact that examples are so widespread. Because clothes often present a kind of "blank canvas" for bad actors, the digital editing skills required to create a fake are relatively unsophisticated, especially when compared with the skills needed to, for example, convincingly superimpose a face on to a body. Therefore, it presents a low-cost, low-effort variety of misinformation.

However, the very fact that photoshopped shirts are so ubiquitous means that readers and social media users, armed with an awareness of them, can more easily guard against being misled. To this end, a simple technique — which we will explain in detail below — can help neutralize all but the most sophisticated of phony shirts.

For example, in March 2022 we debunked a quintessential instance of raw propaganda — with a photograph of Ukrainian President Volodymyr Zelenskyy photoshopped to appear as if he was proudly holding aloft a soccer jersey emblazoned with a swastika, and thus designed to severely damage his reputation: Similarly, for more than a decade we have been debunking photoshopped pictures of former President Barack Obama and his family, including not one but two fake pictures of the Obamas wearing or holding shirts featuring the face of Communist revolutionary Che Guevara.

In another insidious example where bad actors attempted to smear the former president by association, in 2019, we debunked a fake picture that appeared to show Obama wearing a T-shirt that read "R.I.P. Epstein" — in reference to the death of the disgraced billionaire and convicted sex offender Jeffrey Epstein, in August of that year.

Likewise, Trump's family and supporters have also been the targets of phony attire, all of it designed to damage their reputation.

By contrast, another major strand of this type of misinformation is what might aptly be described as a phony endorsement — where a well-known public figure appears to be promoting a particular message, idea or cause, and thus giving a boost to its popularity.

For example, in 2021 Snopes addressed a widely shared photograph which appeared to show the Hollywood star George Clooney advocating the criminal conviction of Trump, when in reality the original picture showed him promoting Casamigos tequila, of which he was a co-founder. Similarly, we have encountered a hoax in which the actor Chris Evans (of "Captain America" fame) appeared to wear a "Keep America Trumpless" shirt and, by contrast, a rather more crudely rendered fake in which the acting spouses Goldie Hawn and Kurt Russell appeared to endorse Trump's 2016 campaign, in rather colorful terms.

During the COVID-19 pandemic, fake shirts played a particular role in anti-vaccine propaganda. For example, in July 2021, when Snopes debunked a digitally edited picture of former heavyweight champion Mike Tyson apparently wearing a T-shirt that read "Trust in God, not in vaccines": And in September 2021, we tackled a fake photograph of Golden State Warriors basketball player Draymond Green wearing a provocative vaccine-related message on his shirt. The shirt worn by Green was a good example of how commercial motivations can often play an important role, even if the content of the hoax is political or ideological. In that case, the design of the shirt that Green appeared to be wearing was in fact available for sale online, and had been used by both pro- and anti-vaccine observers — in a likely effort to maximize its appeal and boost profits.

In another strand of hoaxes, the message of the shirt is designed to appeal to a particular audience, and thus boost the popularity of the wearer. Take for example, the 2019 hoax in which then-President Trump appeared to hold aloft a t-shirt bearing a religiously pious message likely to reinforce his support among conservative Christians: "No matter who is president, Jesus is still king": One way to arm yourself against this type of misinformation is to be aware that phony shirts often, but not always, bear certain hallmarks: perfectly flat lettering on a garment that should be rippling or curving; images that appear perfectly horizontal or vertical on a wrinkly or undulating fabric; and messages that provoke strong emotions in the person viewing them.

However, the best tool available to informed and savvy internet users, in counteracting the effects of fake, inflammatory T-shirts, is the reverse-image search, which will very often guide you to the true, original source of a suspicious image. As Snopes has explained in greater detail elsewhere, the search works as follows:

Whether you use Google Images, TinEye, Yandex, Bing Images, or another search engine, you’re going to go through the same basic process to perform a reverse image search.

Luckily, the reverse-image search is a relatively easy technique to learn. Practice it, use it, and in no time it will become one of your weapons of first resort in the war against misinformation and disinformation.

Previous Article
Next Article
Article 11 of 28 in Collection