A look back at the path that took Brown Jackson to the Supreme Court. The Senate confirmed her appointment on April 7, 2022. 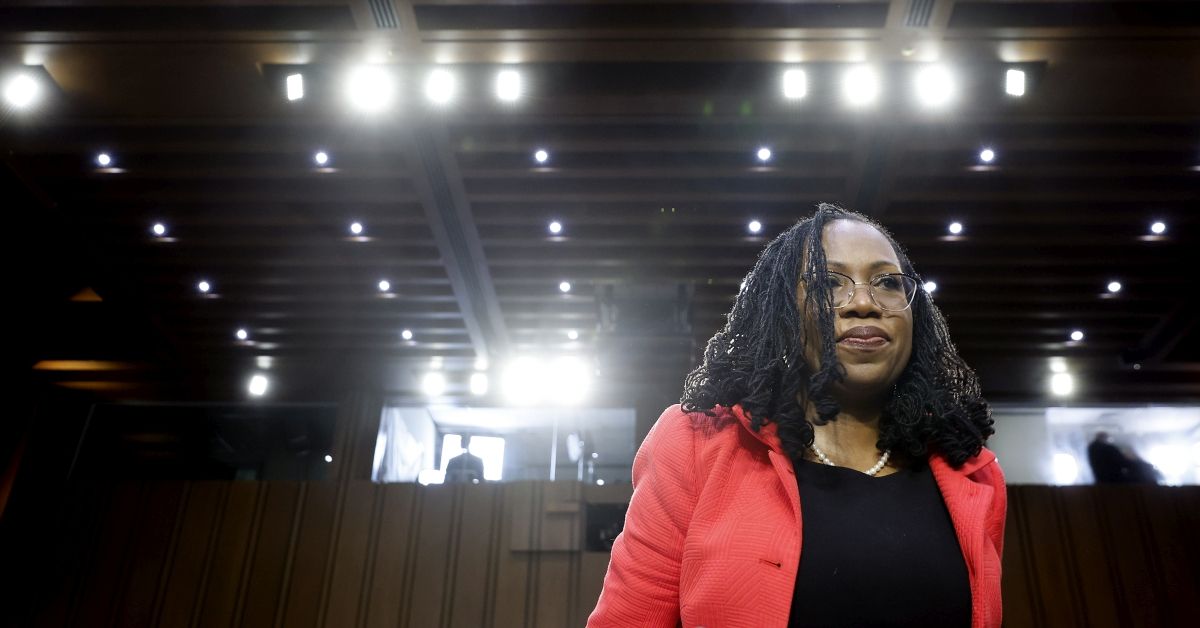 On April 7, 2022, the U.S. Senate confirmed the nomination of U.S. Appellate Court Judge Ketanji Brown Jackson to take a seat on the U.S. Supreme Court.

Once sworn in, she will make history as the first Black woman to join the nation's highest court, and will likely become a household name, and prominent figure in American public life, for several decades to come. So it's worth taking some time to get to know a bit about her: her family and background; her personality; and her career path that caught the attention of President Joe Biden and prompted her nomination. Ellery Brown taught biology and later served as principal at the New World School of the Arts in Miami. Her brother, Calvin Ross, was Miami police chief from 1991 to 1994. For his part, Johnny Brown started out as a public school teacher in Washington, D.C., before getting his law degree from the University of Miami in 1977, and becoming an attorney. He worked for the Miami-Dade public school district for more than a decade, including six years (1999-2005) in the politicallyf raught role of senior counsel.

Of her African name, Brown Jackson would later explain:

My parents ... decided to express their pride in my family’s African ancestry by asking my aunt, who was in the Peace Corps in Africa at the time, to send a list of African girl names for their consideration. They selected the name Ketanji Onyika, which they were told translated into “lovely one.” And for the first 26 years of my life, I was known as Ketanji Onyika Brown.

In 1979, Brown's brother, Ketajh Mikobi, was born. After graduating from Howard University in 2001, he worked for seven years as a detective for the Baltimore Police Department, including undercover work as part of drug sting unit. Later, he served in the Maryland National Guard, and as a U.S. Army infantryman in Iraq and Egypt. As of 2022, he was an attorney at the Chicago office of the law firm K&L Gates.

When she was 4 years old, the family returned to Miami, where she later attended Palmetto High School, a renowned Miami public school whose alumni include the Amazon founder Jeff Bezos. There, she was class president as a sophomore, junior and senior, and a nationally recognized champion debater.

Years later, Brown would describe her enthusiasm for speech and debate as a key early factor in setting her on a path to success:

I learned how to reason and how to write, and I gained the self-confidence that can sometimes be quite difficult for women and minorities to develop at an early age.

As a teenager, Brown appears to have been unusually attuned to political and racial discourse. In 1987, the Miami Herald reported that she was part of a group of Palmetto students who "grilled" then-Interior Sec. Donald Hodel. The Herald reported that, for her part, Brown "asked why the department is endangering Florida's irreplaceable reefs by permitting offshore oil drilling."

And in her last months as a senior at the school, Brown took part in a special seminar on racial, ethnic, and religious prejudice and awareness. According to the Herald, she was part of a group of Palmetto students who led a discussion about the lack of communication and understanding between ethnic and racial groups at the school, and recalled her own encounters with racism, such as when, according to Brown, a drama teacher told her she would not be cast in a play about a white family, because she is Black.

From 1988 to 1992, she attended Harvard, where she got a degree in government. In 1990, as a junior, Brown joined other Black students in protesting about a lack of Black representation among the faculty, and advocating for better support and funding for the African-American Studies program. Speaking to the Boston Globe about a plan to demonstrate at an upcoming Harvard-Yale football game, Brown explained: "We can embarrass the university in front of the alumni."

Brown was also a keen amateur actor and took part in drama and musical theatre at Harvard. Years later, she would recall acting out scenes with one future star — the Academy Award-winning screenwriter and actor Matt Damon. In an April 1990 review of a student production of "Trouble in Mind," the Harvard Crimson praised Brown's performance, writing:

Ketanji Brown is a commanding stage presence as Wiletta. Brown's gradual and fearful discovery of her own strength, of her inner need to rebel, is extremely convincing. This discovery is pivotal in the second act, and it is to Brown's credit that she can carry the action so effectively.

At Harvard, Brown also first met her future husband, Patrick Graves Jackson, whom she later described as "the quintessential Boston Brahmin," and part of the sixth generation of his family to attend the Ivy League school. Jackson studied pre-med at Harvard, before going on to Columbia Medical School. He is a surgeon at Medstar Georgetown University Hospital in Washington, D.C.

When I was in pre-school, I would sit at the dining room table, doing my homework with my father. He had all of his law books stacked up, and I had all of my coloring books stacked up. And when I think back to those times, there really is no question that my interest in the law began that early on. Brown and Jackson were married in 1996, the same year in which she obtained her law degree, events that launched her career in the law, and her family life — parallel paths that, in her own telling, sometimes clashed.

Over the next decade or so, Brown Jackson embarked on what she later described as "a professional odyssey of epic proportions" — at times living and working in Boston, at other times in Washington, D.C., sometimes in private practice, and in other years public service, such as the two years each she spent at the U.S. Sentencing Commission and Federal Public Defender's office, from 2003 to 2007.

Between 1996 and 2000, Brown Jackson also clerked for federal judges in Boston, Rhode Island, and for Supreme Court Justice Stephen Breyer — whom she is now set to replace on the court, two decades later.

The couple moved around in part to facilitate each other's careers at various moments, and their balancing act became exponentially more complicated with the births of their daughters Talia, in 2000, and Leila, in 2004.

Brown Jackson returned to private practice in 2007, working at the Washington, D.C. office of Morrison & Foerster, but two years later, a major shift in her career took place when President Barack Obama nominated her for a four-year term as one of three vice-chairs of the U.S. Sentencing Commission, where she had worked as a staff attorney several years earlier.

That role requires Senate confirmation, bringing with it a rigorous and protracted vetting process, and a measure of public scrutiny. In February 2010, the U.S. Senate approved her appointment by voice vote, meaning without any substantive opposition. In the past decade, Brown Jackson has experienced a further paradigm shift in her legal career, and a move from "bar to bench," beginning in 2012, when Obama nominated her to a judgeship on the U.S. District Court for D.C.

[See also on Snopes: "Was Ketanji Brown Jackson the Judge in the 'Pizzagate' Case?"]

At a Senate Judiciary Committee hearing, Jackson was recommended by Congresswoman Eleanor Holmes Norton, D-Washington, D.C., and then House Speaker Ryan, her distant relative through marriage. Just weeks earlier, Ryan was the unsuccessful Republican nominee for vice president, losing out to the incumbent Democratic president who had nominated Brown Jackson for the judgeship. Brown Jackson herself has been relatively non-partisan in her public pronouncements, though she did volunteer as an election poll monitor for the Obama campaign in 2008, and also donated to it.

In the hearing, Ryan said: "Our politics may differ, but my praise for Ketanji's intellect, for her character, for her integrity — it's unequivocal. She's an amazing person":

After a protracted process spanning two sessions of Congress, senators confirmed her appointment, again by voice vote, in March 2013.

In 2016, after the death of conservative Supreme Court Justice Antonin Scalia, Brown Jackson emerged as an outside contender to be nominated to the high court by Obama. For example, in February 2016 Tom Goldstein — the influential founder of SCOTUSblog — talked up her credentials:

... Judge Brown Jackson’s credentials would be even stronger if she were on the court of appeals rather than the district court and if she had been a judge for longer than three years.  One person whom I know who has been deeply and directly involved in prior confirmations is confident the president would not nominate someone from the district court.

I disagree because these are special circumstances.  It is easy to see a political dynamic in which candidate Hillary Clinton talks eagerly and often about Judge Brown Jackson in the run-up to the 2016 election, to great effect.

Goldstein wasn't the only observer impressed by her. According to an anecdote recounted by Brown Jackson, her then 11-year-old daughter Leila composed a handwritten letter to Obama himself, humbly recommending her mother as Scalia'a replacement:

While you are considering judges to fill Justice Scalia’s seat on the Supreme Court, I would like to add my mother, Ketanji Brown Jackson of the District Court, to the list.

I, her daughter, Leila Jackson of 11 years old, strongly believe she would be an excellent fit for the position. She is determined, honest and never breaks a promise to anyone, even if there are other things she’d rather do. She can demonstrate commitment and is loyal and never brags. I think she would make a great Supreme Court justice, even if the workload will be larger on the court, or if  you have other nominees.

Please consider her aspects for the job.

Thank you for listening,
Leila Jackson.

In April 2021, Brown Jackson faced Senate confirmation for the third time, when President Joe Biden nominated her to replace Attorney General Merrick Garland as a circuit judge on the U.S. Court of Appeals for the D.C. Circuit — a prestige appointment in the federal judiciary, and often the "final stop" before the Supreme Court for judges on the rise.

On this occasion, her confirmation took less than eight weeks, and the Senate voted 53-44 in favor, with three Republicans — Susan Collins of Maine, Lisa Murkowski of Alaska, and Lindsey Graham of South Carolina — joining the Democratic bloc.

After Breyer announced his intention to retire, Biden selected Brown Jackson, hailing her as "extremely qualified, with a brilliant legal mind" and "someone with extraordinary character, who will bring to the Supreme Court an independent mind, uncompromising integrity, and with a strong moral compass and the courage to stand up for what she thinks is right."

In late March 2022 — before the Senate confirmed her nomination with a 53-47 floor vote — the Senate Judiciary Committee interrogated Jackson about her sentencing history, personal beliefs, and social issues. For a summary of the content of those hearings, check out our analysis.

This page was updated on April 7, 2022, after the Senate confirmed Brown Jackson to the Supreme Court in a 53-47 vote.